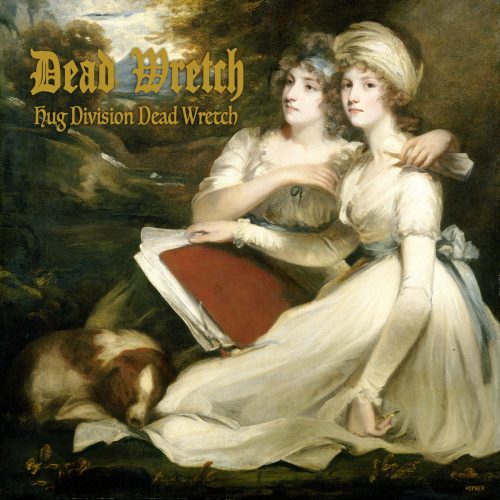 Hug Division Dead Wretch may be the fastest I have ever gone from clicking around with the Random Band button on Metal-Archives to purchasing an album.

Hug Division Dead Wretch is the first full-length for Dead Wretch, a one-man project belonging to musician Daniel Jackson based out of Albuquerque, New Mexico, that at one point counted amongst its ranks fellow band member “Definitely Not A Copy Of EZDrummer”. It is a tongue-in-cheek black/death/grind project that despite its less-than-serious origins has grown into something that not only has an acidic sense of commentary but also the musical bite to back it up. Having spent a few years launching EPs and a handful of joking singles, Dead Wretch released its previously mentioned first full-length this year, comprising mostly new songs and three tracks re-done from the project’s first EP, the tersely titled fuck it.

While most projects like this tend to make use of the plug-and-play nature of grindcore, Dead Wretch performs a much more difficult act — that of skewering various specific subjects (at one point claiming to be from Minot, North Dakota, so they too could seem more exotic) but also offering righteous indignation and social commentary (check out “Eat Shit” for an immediate example) while backing it up with excellent music.

Sometimes you encounter musical projects that seem to have a sense of humor tailor-made to line up with your own. The fact that Dead Wretch so effortlessly draws a few chuckles while also ripping out some massively headbangable riffs (and acknowledging what artist he’s mimicking) seems almost unfair. A large part of that achievement can be credited to the fact that the musician behind this project is very prolific, with a collective of more serious projects on his resume (including some we have written about before, such as Void Ritual and Mendacium as recently as last year) where he hammers away at various sub-genres within the black metal and death metal spheres. With Hug Division Dead Wretch he takes all that experience and runs with it, combining musical expertise with various acerbic lyrical expositions throughout its twenty-minute runtime.

It’s difficult not to fawn over every song here because every one is like a surgical strike on its target, including the straightforward rock-n-roller “Give Me Your Fucking Money”. Whether a song is targeted at specific groups of people (e.g., the collective of homophobes and racists he tells to eat shit in “Eat Shit”) or the more abstract tropes that black metal acts tend to use, Dead Wretch legitimately has the music behind it sounding like it belongs to that song.

You don’t get to write a song like “Red Logo Atop A Buff Goat Demon” without having it sound like an abrasive black metal song while also opening with the line, “OK, we get it. You like Blasphemy too”. The song “Miracle Blackpunk Connection” its basically a minute of “the circle-pit riff” with a blast right at the end, but that minute-long grinder of a song is a nice headbanging jolt that helps bridge the gap between angrier and blastier “Eat Shit” and the more punk-fueled “Unfuckable” — itself containing a pretty solid blasting segment right at the end that swerves the music from goofy headbanger into a molten hellfire monster for a few segments. That turn-on-a-dime quality of the song-writing also makes Hug Division Dead Wretch the kind of album where you want to stick around wondering what is going to be pilloried next.

Some of the targets on Hug Division Dead Wretch are immediately apparent — you can guess what “You’re Not Elite” and “So Kvlt, So True, So What?” are about as soon as you read the titles. The songs themselves are genuinely fun though, so you experience the joy of hearing someone yelling “So kvlt, so true, so what..fuck you!” followed by a massive guitar groove. And within the track list on Hug Division Dead Wretch lies “Have You Guys Heard Witchery?”, which is one of the first songs this Dead Wretch put out, a track whose lyrics acknowledge how close it sounds to a Witchery song, and that song’s writing style carries through a large chunk of the material on the album as a whole, so that it becomes something of an unintentional Witchery album that just happens to be having a lot of fun playfully mocking a lot of genre tropes. Thus, “You’re Not Elite” and “So Kvlt, So True, So What?” contain the DNA of some serious blackened thrash interspersed throughout them.

Eliciting a few laughs is often the easier part of projects like this, and admittedly, the song titles were what drew your own beloved writer to it. But aiming beyond the “We have funny song titles act” is the harder part of the performance, and Dead Wretch having the chops to musically back up the at-times-playful mockery makes it that much more effective. Dead Wretch is one of those cases where the best mockery comes from a place of self-awareness, as Dan Jackson has some black metal projects of his own (as mentioned above) and clearly loves the genre. His ability to take pot-shots at metal as a whole thus comes from a more aware place than the lampooning of those who simply laugh at it from the outside, so you’ll encounter little one-line things that most people who aren’t metal fans won’t get. The more lethal and straightforward songs are the more outwardly angry tracks, where subtlety is cast aside in favor of a more blunt “Fuck you” approach, though their targets are often the most deserving of such treatment.

Combining all of these sentiments with some legitimately good music, including some obvious thrash riffs and well-pieced-together black metal segments, is what makes Hug Division Dead Wretch stand out. “Peter, This Is Fucked Up” would stand out as a fantastic sub-two-minute blast of hellfire even if you weren’t aware of the subject matter, and that act happens constantly throughout this release. Hug Division Dead Wretch also wraps up in about twenty minutes, leaving no time for the joke to get old.

At the outset, Dead Wretch might seem like one of those projects that was meant to go up in a conflagration, an idea released quickly into the world, set aflame, and then disappearing just as quickly as it appeared — basically, songs hammered together based on a quick thought and slammed out into the world. But Dead Wretch is a little more subversive than that, and tends to stick with you, which is why the “random band button to purchase” land-speed record was shattered so quickly on this end. The album is built around a solid combination of blackened thrash and speedier grind segments, absorbing a handful of other genres around its fringes, that allows it to stand tall on its own as a twenty-minute musical joy. The subject matter amplifies it so much more, so that you go from “oh wow, someone is joking about Hypocrisy” to “wow, this is actually a pretty solid song”. That specific joy is incredibly hard to find and replicate these days, and it is what makes Hug Division Dead Wretch so much fun.