Last fall we had the good fortune to premiere a track named “Rompe El Cepo” off the new album by the Spanish band Pánico Al Miedo, accompanied by a video that made good use of the album’s cover art (created by that famous connoisseur of the grotesque, Ed Repka). Since then, the band released a second video (for “La Fuente“), which is an eye-catcher of a different kind, and the album itself was released by a consortium of labels in April.

And now we get to bring you a third video for the album Formador, a Spanish-language lyric video for a song named “Cebos Vivos“, which seems to mean “live bait” in English. And in case you missed the first two videos or the album as a whole, we’re including streams of all of that, too! 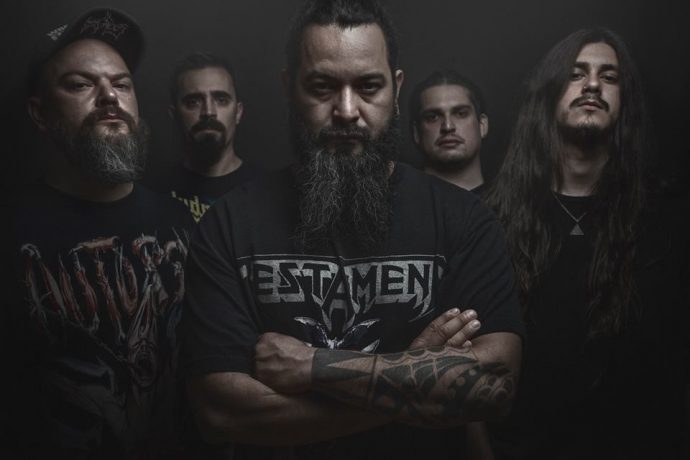 In writing about Formador last fall, I called it a non-stop thrill ride, and it really is. In crafting their own blood-rushing attack, Pánico Al Miedo have embraced and integrated the styles of both Floridian death metal and Bay Area thrash, paying homage to fearsome progenitors from the ’80s and ’90s. And on this debut album, in addition to enlisting the artist who crafted some of the band Death’s most memorable covers, they secured guest guitar solos from two former Death guitarists — James Murphy (also Obituary, Testament) on the track “Formador” and Bobby Koelble on the song in the video we’re premiering — “Cebos Vivos” — and on the bonus “Formador”.

As he is throughout Formador, vocalist Marc Jufré is in attack mode in “Cebos Vivos”, his raw, rabid howls lighting a fierce fire under the song, while his bandmates Jordi Creus (guitar), Pep Bruguera (guitar), Chiri López (bass) and Alfred (Al Drummer) propel the speedy surge with battering percussion, darting and swarming fretwork, and doses of slower and more morbid and malicious melody. The band also lock into a head-moving rhythm to anchor Koelble’s twisted, flame throwing solo, which caps a very contagious track.

Enjoy all three videos plus the full album stream below.