(This is Wil Cifer’s review of the new album by the Swedish black metal band Craft, which was released on June 22nd by Season of Mist.)

Either bands change or they become stagnant. Going into this album I hoped the venom this Swedish band would unleash might make black metal hate again. It stands to reason, however, that after 20 years in existence the band’s fifth album might find them tiring of the punk-tinged aggression that drove the first four. I loved how Void (2011) was a big middle finger, and that is the soundtrack I think the world needs, but these guys have other ideas.

This is obvious right from the smoother guitar tone of the first song (“The Cosmic Sphere Falls”). Normally I would tell you how I have grown weary of blast beats and want black metal bands to not depend on them. Blast beats prove not to be the problem, as the band creates enough of a sonic sprawl that they don’t sound like they are just playing color-by-numbers with only marginally different shades of black, Instead we are getting a dark coat of gray dripping from these songs. 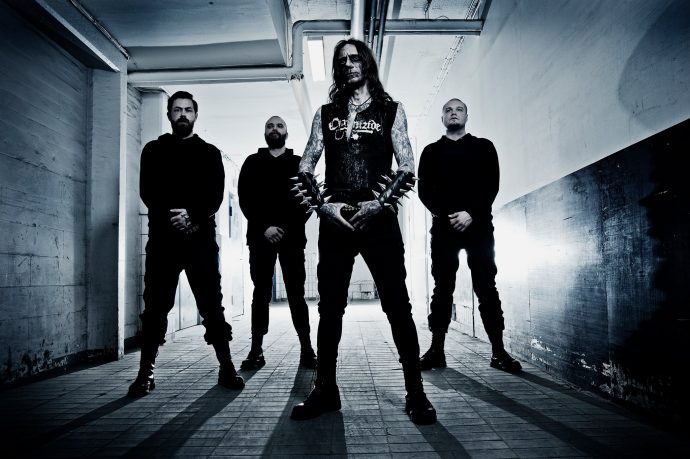 This is an album I had to listen to for a few days rather than just relying on my first impression. In doing so I began to pick up on things like the more nuanced and melodic bass lines that run under many of the songs. This melodic underpinning becomes more pronounced on the throb of “Again”. While this album is a finely tuned engine of destruction, it does find the band being more adventurous as they manage to maintain the integrity of the overall sound.

“Tragedy of Pointless Games” has more form and function, at times carrying a more rock ‘n’ roll groove. This rock ‘n’ roll feeling continues to find its way into the more riff-oriented “Darkness Falls”. The first few songs began to remind me a little of Inquisition due to the croaked narrative of the vocals, but by “Darkness Falls” their distinct personality took center stage.

Aside from the brief muttered vocal in the song’s last minute, “Crimson” is an instrumental, though I am not sure the droning pulse of this one justifies the lack of vocals. “YHVH’s Shadow” finds them relapsing on blast beats, but dynamic enough in its crescendo while pleasing me with its dissonance. The closing song “White Noise” is not noise . In fact it summons up a pretty powerful chug. One of the album’s most straight-forward moments but also one of the most effective. It commands head-banging and embraces almost classic metal roots.

Yes, this album is less confrontational and more mature, a phrase that might not seem to be praise in many black metal circles, but here it works for what they are doing. I think I will get more mileage out of this one because it doesn’t revisit the past and works out of more of an esoteric darkness than their former shroud of nihilism. Perhaps the more bleak spiritual focus is some form of anger management in its more introspective path. Fans of Craft will still find the essence of the band they love here, it’s just showing another face.