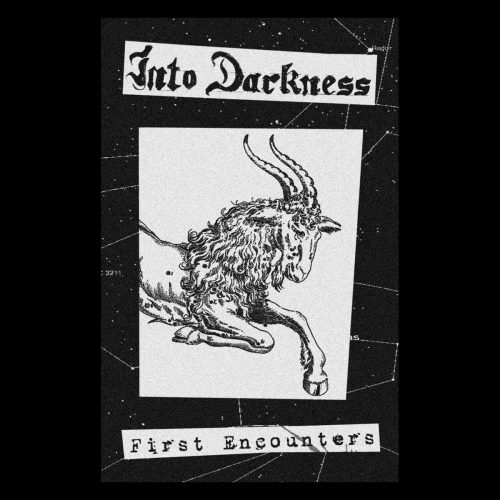 To begin, I have the latest release from an Italian band whose every release I’ve written about —  their 2012 debut demo (here), their 2013 demo Cosmic Chaos (here), their 2013 EP Transmigration of Cosmic Creatures Into the Unknown (here), their 2014 split with Ghoulgotha (here), and their 2015 split with Profanal (here). And now there’s a new one, and I’m keeping my record of slavish devotion intact. 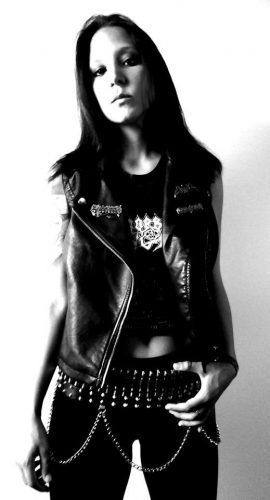 The pronoun “they” is a bit of a misnomer in the current day, however. Into Darkness went into hiatus in November 2014, and when it reactivated in 2017, it had become the solo project of founding voicalist/guitarist Doomed Warrior, who does everything on this new EP, First Encounters, which consists of two original tracks and a cover of “The Flame’s Masquerade (Her Sun Is the Moon)” by the Dutch death metal band Pentacle from their 1996 EP The Fifth Moon.

D. Warrior has the voice of a demon panther bred with a roaring bear, and a formidable arsenal of riffs at her disposal as well. “Eta Carinae” is as grim and morbid as a human charnal house, stomping and stalking like a lumbering horror-beast and charging in for the kill in rampaging displays of slaughtering ferocity. The song’s frequent tempo changes and grisly leads make it a stand-out way to launch this short release.

“Tales From An H II Region” frequently switches gears, too, but there’s a scampering, punk-like rhythm alternating with a thrashing momentum in the faster movements, while an atmosphere of pestilence and soulful misery oozes from the less brawling moments. The Pentacle cover brings the EP to a close in electrifying fashion, with a vicious and eminently headbangable onslaught that’s bursting at the seams with energy and power.

In a nutshell, First Encounters is a black gem, which pays homage to old school roots but sounds as vibrantly (and ghoulishly) alive as that reanimated corpse that just escaped the graveyard and has hungrily found its way to your home. The EP was released on tape in late May by Unholy Domain Records, but that edition is sold out now. You can still get it digitally on Bandcamp, which is what I’ve done. 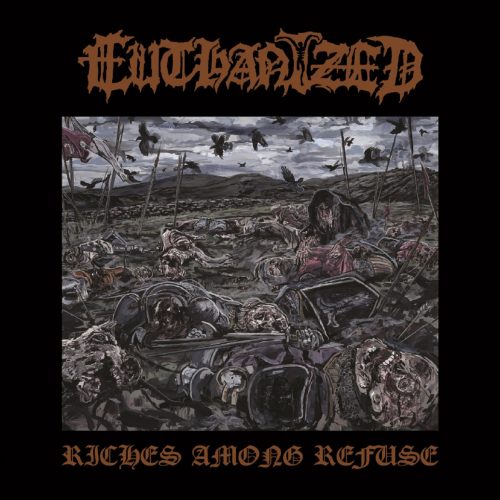 Euthanized come our way from Victoria, British Columbia, not far north of the metallic island NCS has occupied as its headquarters. With a 2016 self-titled demo behind them, they released an EP named Riches Among Refuse on March 8th of this year, and I finally gave it a complete listen a few days ago.

After a brief intro track, whose celestial choir and trumpet fanfares seem sort of like a misdirection in retrospect, Euthanized discharge four tracks of demonic filthiness that do a fine job setting fire to the nerves and muscle fibers. The high tone of the guitars give the music a garage-band flavor, while the riffs draw upon influences of speed metal, punk, and death metal to feed this sulfurous black metal cauldron. There might be lyrics, but the vocalist’s reverberating howls and shrieks sound more like inarticulate expressions of infernal fury and ecstasy.

The music hammers, whirls, bounces, crawls, and brawls, and it’s all nasty as hell. There’s a primitive, feral, stripped-down quality to the songs, but the song-writing is very good, and there’s an authentic spirit in this time-warp trip to the proto-extremity of decades long gone, in the vein of Bathory, Darkthrone, Hellhammer/Frost, and Sabbat. I eagerly bought this one, too. 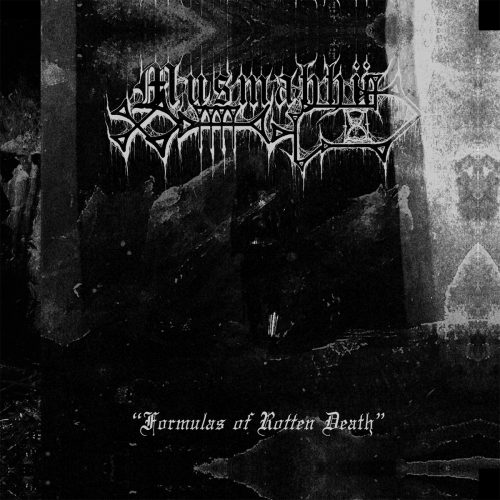 The can’t-miss German label Iron Bonehead Productions released three 7″ vinyl recordings on June 22nd, one of which was a two-track debut by the Swedish death metal project Musmahhu. At the same time, the tracks were made available on Iron Bonehead’s Bandcamp.

While Formulas of Rotten Death may be the first release by Musmahhu, the man behind the project is a known quantity, albeit in the black metal underground. That man, Swartadauþuz, is the founder of Ancient Records and the mastermind behind Bekëth Nexëhmü, Azelisassath, Urkaos, Trolldom, Mystik, Gnipahålan, and many other projects.

The label describes the release as “a two-song tornado of sweltering disease and primordial horror, all captured in richly cavernous tones,” and represents that “the same sense of delirium and dementia that marks Swartadauþuz’s other projects manifests itself in Musmahhu, just transposed onto eternal Metal of Death!”

2 Responses to “SHORT BUT SWEET: INTO DARKNESS, EUTHANIZED, MUSMAHHU”