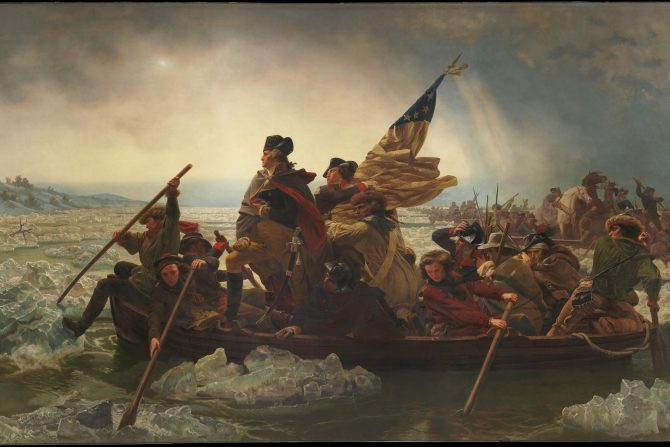 Even in less toxically divisive times, I’ve never been a big fan of the holiday, other than as an excuse to gorge on food and drink and try to have a good time with friends and family. Ideally, it could be an occasion to remember and re-commit to the best of the ideals that led to the birth of the country (and the near-suidical courage it took to bring that about); instead, it’s usually swallowed up in back-slapping, flag-waving displays of “patriotism”, which too often becomes another word for nationalism, xenophobia, and repression of dissent.

There’s even less reason to make a big deal about The Fourth at NCS, since the Google stats tell us that half of our visitors consistently come here from locations outside the U.S. For them, it’s just another day. And since we try to post something about metal every day of the year, holidays included, it’s more or less just another blogging day for me too — except I’ll only post one thing today, which is this thing.

I picked recently revealed songs from five bands to recommend today. The fact that none of the bands are from the U.S. shouldn’t be interpreted as some kind of unpatriotic political commentary. It’s just a coincidence. I arranged them in the following order on purpose: The first three are a sequence of super-dark pieces of music; they seemed to belong together. For contrast, the fourth one revs the body engine very hard, and the fifth one (from an old favorite) kicks a lot of ass, too. 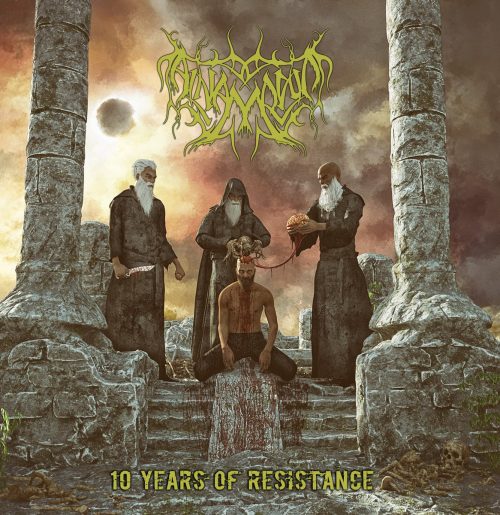 Al-Namrood is an anti-religious Saudi Arabian black metal band, which no doubt continues to be a dangerous way for its understandably anonymous members to spend their time in that Kingdom. The last time I wrote about them was in early 2017, in the run-up to the release of their sixth album, Enkar. Their seventh one is now set for a July 20 release by Shaytan Productions. Fittingly, it’s called Ten Years of Resistance, since 2018 marks the band’s 10th year of existence.

The album consists of re-recorded tracks selected by the band from their previous releases. The one track from the album revealed so far is “Asdaa Al Dmar” (which originally appeared on their 2010 album Estorat Taghoot), presented through a video that makes striking use of the album’s striking cover art.

Al-Namrood’s music, insofar as I’m familiar with it, has always been remarkably distinctive, and this track is a startling example of that. It’s heavy as hell, dark as night, massively head-moving, and as sinister as a swaying cobra. And it includes the exotic ambience created by strains of Arabic melody, as well as one-of-a-kind vocal madness, which sends shivers down the spine all by itself. Pitch-black magnificence. 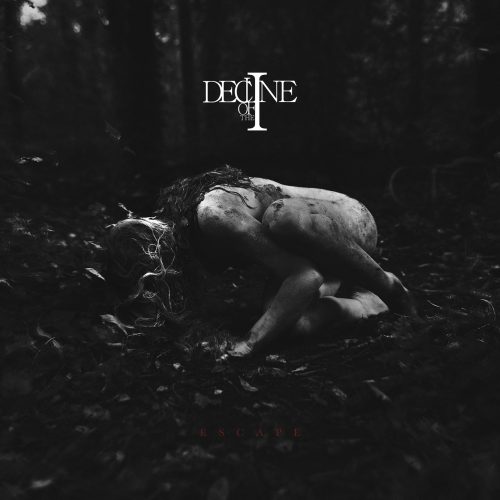 The French post-black metal band Decline of the I have recorded their third studio album, Escape, which is the conclusion of a trilogy. Its lone creator, A, who has played with Vorkreist, Merrimack, Neo Inferno 262, Malhkebre, and Diapsiquir, was accompanied on this album by musicians from Merrimack, Anus Mundi, Temple of Baal, Eibon, and Drowning. It will be released by Agonia Records on July 27th. It’s described by A in these words:

“After a heavy and neurasthenic first chapter, and an epileptic, dirty and violent second one, here’s the last part of the Decline of the I’s trilogy: Escape. It’s now time to leave, to avoid this perpetual aggression of the outside world. All the other reactions leaded to a dead end. Running away is the only possible move for the subject to preserve its entity. There are many forms of escape: madness, suicide, technology, spirituality. This third album explores all of them. Musically, it’s the synthesis of all the previews works; it’s contemplative and slow but also very fast, dark and brutal”.

The most recent single, released yesterday, is “Disruption” — and it will indeed disrupt any sense of comfort or complacency you may bring to the experience of listening to it. It’s equal parts hallucinatory and body-shaking, with eerie, wailing melodies entwined with booming rhythms and scalding vocal ferocity. When the band punch the accelerator, the music reaches heights of delirium that punch the pulse rate too, and when they slow the pace it becomes even more frightening. The frequent tempo changes are part of what keeps the listener off-balance, but only part.

I hadn’t heard of the Swedish doom band Vanhävd before last night, when I listened to their debut three-track EP, Låt köttet dö, which includes ingredients of black metal and post-metal, as I hear it. According to a press release, the EP’s lyrical themes “concern the intersection between visceral and existential horror, drawing inspiration from writers such as Norwegian antinatalist philosopher Peter Wessel Zapffe and horror author Thomas Ligotti“, and that alone induced me to explore the music.

Two of the songs, “Om den vulgära farsens nonsens” and the title track, have been presented through lyric videos that are visually as unnerving as the music is, and I’ve included those along with a Bandcamp stream of all three songs.

The opening title track includes strands of dark, exotic melody that I thought would make it a fine companion for Al-Namrood’s music in this post. It also reveals Vanhävd‘s penchant for juxtaposing segments of slow, oppressively crushing funeral-doom and surges of livid, hammering intensity, while shrouding everything in an atmosphere of disturbing tension and chilling gloom. The track also displays the vocalist’s own dynamism, as he ranges from heartless, hollow roars to eruptions of vicious, shrieking fury.

After the near-cataclysmic finale of “Låt köttet dö”, it was an astute choice to begin the second track with light, pinging keyboard tones and soft, dismal guitar melody before ramping up into a mid-paced mix of jabbing riffs and rumbling, clattering drum blows. It becomes a head-nodder of a song, spliced with a spooky, softer interlude, spectral guitar reverberations, and episodes of boiling lunacy. And as bleak and disturbing as the music is, it also soars.

Horror lurks ominously beneath the surface, or jumps right out into the open, all the way through the EP. And the band continue to display their talent for dynamism in the closing track, “Drömmaren”, which begins in a heavy, lurching cadence, its morbid, moaning weight counterbalanced by high, ghostly notes and rising choral voices; transforms into periods of wretched derangement; and softens into moods of tear-stained wistfulness over gloomy spoken words. It kicks into a rocking rhythm, too, but the tension in the music never relents.

This is a very fine little black gem whose changing facets keep a firm grip on the listener’s attention, even if it might give you nightmares later.

Låt köttet dö has a release date of July 19, 2018, but it’s available now as a digital download at Bandcamp. 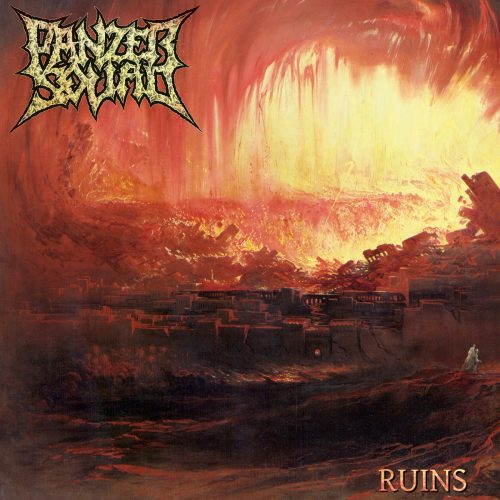 As promised, it’s now time to change gears, and to do that I’ve selected a track called “Extinction” off the new album Ruins by a three-piece band from Germany named Panzer Squad. The Bandcamp page for the album describes it as, “A mixture of oldschool 80s thrash and d-beat punk about violence, drugs, insanity and death”. It’s due for release on August 31 by the German label Testimony Records.

“Extinction” is simply fantastic — utterly electrifying and utterly vicious, with the kind of incinerating vocal hostility that might make you think of black thrash. The band also do a great job in this song switching gears and injecting their full-throttle, fast-jabbing mayhem with bursts of eye-opening melody (including a delicious solo). Can’t wait to find out if the rest of Ruins is as explosive and well-crafted as this track is. 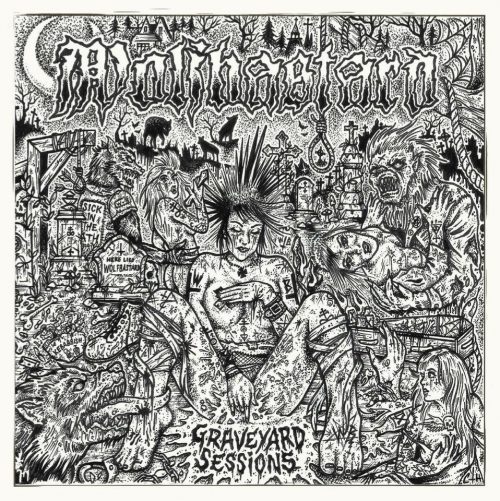 Having shifted into high, ass-kicking gear with that Panzer Squad track, I decided to stay there as a way of closing this post. And to do that, I picked a track called “Black Masses” from the second album by the British band Wolfbastard. Entitled Graveyard Sessions, it will be released on July 13 by UKEM Records.

I enjoyed the hell out of this band’s first album (and explained why in a too-brief review here). And the first advance track from their new album delivers the same combination of ingredients that made their debut album so fucking good. They get things rushing fast and furiously from the start, the music driven by the d-beat, lit-up by swirling riff-work, and heated to a boil by truly savage vocal blood-spray. But in the less brawling movements of the song they also leaven their rampant punk fury with an emotionally powerful melody that’s both melancholy and near-majestic in its feeling.

And with that, I’m going to go listen to the rest of Graveyard Sessions. As always, I hope you enjoy the rest of your fucking day, holiday or not. Don’t let any bastards get you down.

2 Responses to “FIVE FOR THE FOURTH: AL-NAMROOD, DECLINE OF THE I, VANHÄVD, PANZER SQUAD, WOLFBASTARD”