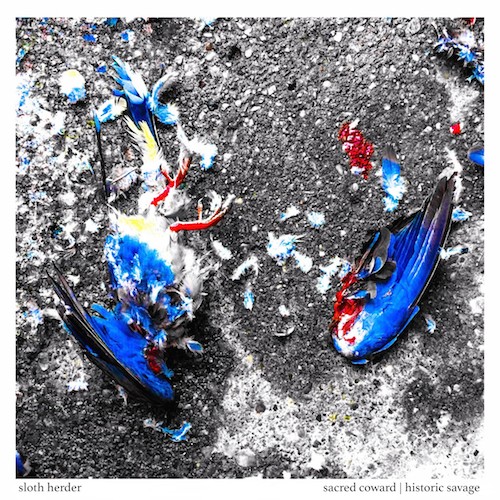 If you look at Sloth Herder’s Facebook profile, you’ll see that they’ve chosen “Power-slob” as the description of their musical genre, and “abandon pop sensibility” as the summing up of their band interests, which is pretty funny. And in a way, it kind of makes sense — because trying to pin down the band’s music is a bit like trying to pin a glob of mercury to the dashboard of a moving car. Elsewhere, I’ve seen it described as “demented avant-death/grind”, “blackened doom/grind”, and “a dynamic clusterfuck of seething brilliance”. Their debut album, 2017’s No Pity, No Sunrise, spawned comparisons to such wide-ranging acts as Antigama and Pyrrhon, Yautja and Gaza (among many others).

I myself have resisted the temptation to whip up some kind of genre descriptor in my previous writings about the band, because I don’t like the convulsions that happen when my brain knots up. I’m content just to whip up some adjectives in an effort to capture the convulsing effects of Sloth Herder’s music. Speaking of which, we do have some new Sloth Herder music to present. It’s a track named “Sacred Coward“, which is one of two tracks on a new single that the band will be releasing through their Bandcamp page on July 20. 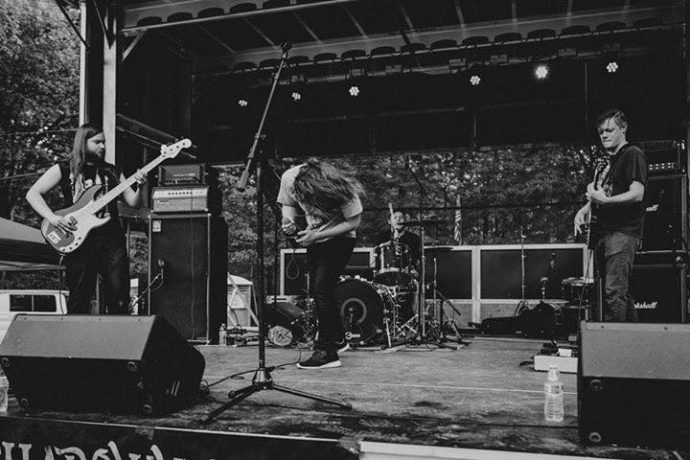 The B-side of this single, “Historic Savage“, was launched into the ether by Svbterranean last week, and that publication described the music as a collision of “grindcore, death metal, and 90s metallic hardcore volatility”. If you missed that premiere, I’ve included a stream of the track along with our own premiere down below.

As for “Sacred Coward”, the band tell us that it’s about “how often conventional wisdom is unreliable, and the public’s blind faith in constants (government, religion, nationalism) remains un-wavered despite being consistently fallible”.

Unwavering constancy certainly isn’t an accusation you could level at the music. “Sacred Coward” is an intensely destabilizing piece, as grim and black-eyed and vicious as you could want, and just as intensely freakish and unnerving. It batters and seethes, puts your teeth on edge with its dissonance, twists your neurons through the unpredictable swarming of the fretwork and the rapid changes in its often off-kilter rhythms,  scalds the mind through the vocalist’s acid blasts of fury, and ultimately sends you off in a finale that’s downright hallucinatory.

The new single was recorded in February 2018 with Dave Kaminsky at Studio Wormwood in Connecticut. As noted above, it will be released on July 20. There weren’t be any pre-orders offered for this release, so just remember to visit Sloth Herder’s Bandcamp page on the release date.