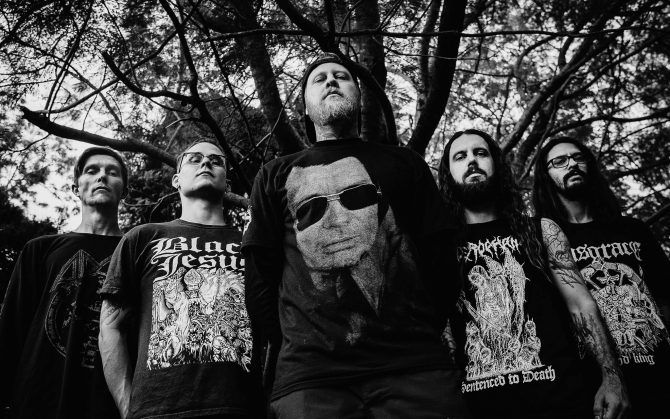 Have you ever wondered what it might feel like to plant yourself, chained to something sturdy, in the face of a Category 5 hurricane? Or to be caught defenseless in the path of a jet-propelled carpet-bombing campaign? Or to be scorched to a crisp by the blast of a military-grade flamethrower? Well of course you have — haven’t we all?

There’s no need to wonder any more, or to be left with the emptiness of fervent desires for self-destruction gone unanswered. You just have to listen to “Skinwalker“. Even a single solitary listen will do the trick.

“Skinwalker” is a track off the debut album by a band from Brisbane, Australia, named Descent, whose members come from the ranks of such bands as From These Wounds, Scumguts, Dire Wolf, Coffin Birth, The Fevered, and Siberian Hellsounds, most of whom we’ve written about here at one time or another. Entitled Towers of Grandiosity, the album is pegged for release by Redefining Darkness Records on August 31st.

You might think I was exaggerating in that opening paragraph. Nope. This track is absolutely explosive. While Descent‘s music pulls from across a spectrum that ranges from death metal to grind to hardcore punk, and will likely appeal to fans of Dismember, Black Breath, and Nails, this particular track is simply an overpowering assault on the senses, one that kicks the adrenaline into overdrive from the first second.

It has that mauling, chainsawing guitar tone that brings to mind old Swedish death metal; a big bone-quaking bass pulse; a mix of blindingly savage, range-spanning vocals; some truly attention-grabbing drumwork; and the kind of rampant, full-throttle energy that could drive the powergrid of a large metropolis.

And it’s only two minutes, fifteen seconds long. But a lot of cool things happen in that brief stretch, above and beyond the pure head rush you get from being carried away (and beaten senseless) by it. You’ll see….

I guess it’s obvious that I’ve become kind of ecstatic about the track, and very damned happy that we get to bring it to you. Here’s what the band’s Brendan Pip Avid told us about the song:

“Musically it was the 2nd song written for the album and I wrote the whole thing myself on Protools and took it into band practice one week and played it to the boys. Everyone gave it the thumbs up and it never changed from then. It was very Nails/Dismember influenced”

It’s still early days for this release, which was mastered by Brad Boatright at AudioSiege. The cover art by Dan “Sawblade” Shaw isn’t quite ready for disclosure yet; the pre-orders aren’t ready now (but aren’t very far away) — it will eventually be released digitally (Bandcamp, Apple Music, Spotify, Google Play, Deezer, etc) and physically on CD. To keep abreast of further developments, watch these spaces like a hawk: