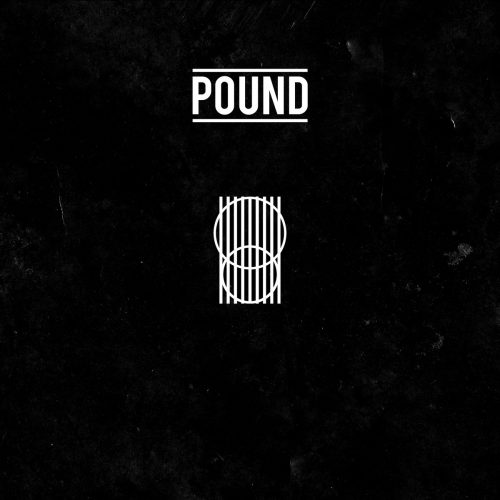 It seems that every time I’ve written about Seattle’s Pound (who used to go by the name Lb.!), I’ve begun by reminiscing about how gob-smacked I’ve been by the hair-raising, head-spinning, ridiculously explosive nature of their live performances, and here I am doing it again. You really have to witness it to fully understand why it’s such a nerve-firing, nerve-rending experience, but while it’s impossible for any recording to do it justice — because you’ll only be able to hear, and not to see — their long-awaited debut album comes as close as one could hope for. 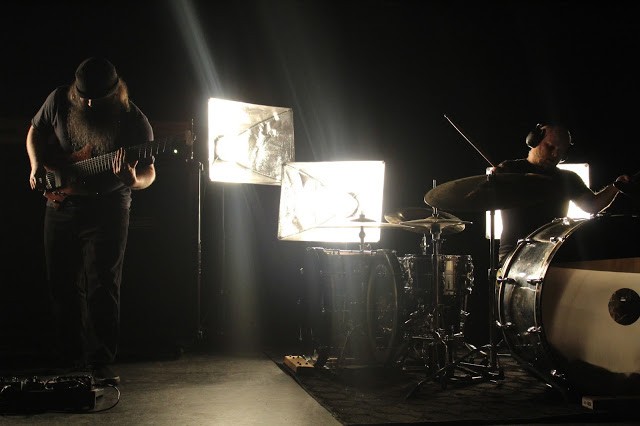 The sight of just two men on stage creating such mind-boggling torrents of hurricane-strength insanity and spleen-rupturing groove — just two, rather than a small army — is amazing by itself, but it’s also the way they do it which is such a big part of the wide-eyed fun.

There in front of you is one incredibly hairy dude (Ryan Schutte, who reveals skin only in a narrow swath around his eyes) performing feats of mystifying daring-do on a monster guitar that seems to have more strings than a grand piano and a pedal board the size of Rhode Island. And also there in front of you is a second dude (David Stickney) who pivots back and forth between two different drum kits, playing like a pair of twins rather than a single human. Sometimes the two seem to be maniacally going off in different directions, testing how fast and how far they can fly without losing sight of each other, and then almost without warning they’ll rapidly converge in a way that wallops you right in the gut… and the spine… and in what’s left of your head.

Nope, no record can capture those sights, but their self-titled debut is a great capturing of their sound, which has been very hard to pin down for as long as I’ve been listening to them, and is no more easily summed up today.

As others have noted, you’ll find ingredients of grindcore, sludge, death metal, and math-metal (among others) in these heady concoctions, all of which are designated on the album by notations that are symbolic representations of a rhythm contained in the track, rather than names. And, on reflection, mere names would be too mundane for these experiences.

Much of the appeal of the music comes from the sheer speed and technical extravagance displayed by the band, coupled with the unhinged, lightning-fast changes that happen from moment to moment. It’s the kind of appeal exerted by high-wire acrobats working without a net, or daredevils riding turobocharged bikes over ranks of semi-trucks, through fire. You can’t believe the performers can do what they’re doing, and you can’t believe they’re crazy enough to try.

There’s a lot of insanity in Pound‘s music — freakish arpeggios, bursts of insectile melody, other forms of hyper-speed fret-darting, complex percussive rhythms and maniacal snare-drum frenzies, the instantaneous jump from high whining strings to uber-low, lead-weighted ones, the sudden braking from rocket-fast careening to pile-driver-like bludgeoning. And yes, there are grooves — big, brutish ones. They tend not to last very long, but long enough to keep you hooked, long enough to kick your head into banging gear.

And the truth is, if you listen to the tracks more than once, it will become apparent that the are through-lines of rhythmic connection, even if they’re often of the Meshuggah-like, off-kilter variety, and even if you might be missing them because you’re being distracted by the what-the-fuckedness of everything else that’s happening. When you really pay close attention is when you can’t help it, because the band are Pound-ing so hard that you feel your fillings coming loose. 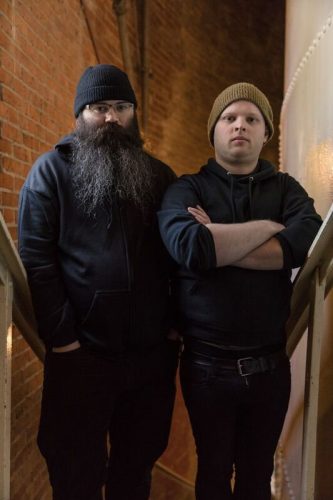 You’ll have to look long and hard to find anything out there quite like this album. I’m under no illusion that it will appeal to everyone — it’s too boisterously experimental, too persistently destabilizing, too mathy and too noisy for everyone’s tastes. But for those who persistently search for new surprises, who roam along the far edges of the metal map where the warning says “Here There Be Dragons”, you’re in for a thrill.

Pound was released by Silent Pendulum on July 13th and is available on Bandcamp.

P.S. The record might not give you the sights of Pound‘s live performance, but fortunately there are videos for the album, and I’ve included them below, one of which shows Pound performing.

One Response to “POUND: “POUND””