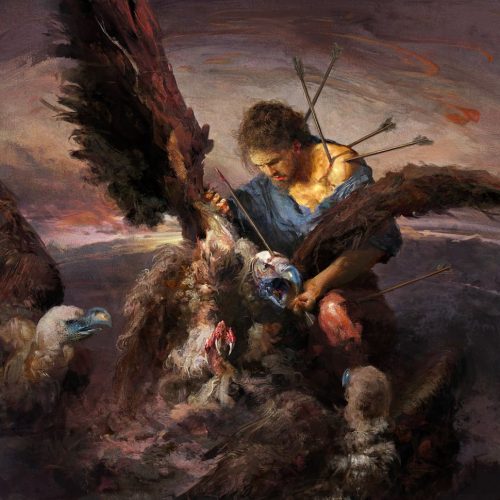 Here we are, four whole days into the week without a round-up, which of course means there’s a whole hell of a lot to round up. So, we’ll have a two-parter today, along with a couple more premieres.

Well, of course I’m going to lead with Hate Eternal‘s new track, because of course I’m not going to squander the opportunity to put another Eliran Kantor masterpiece up at the top of our page. In fact, I’m going to do it again after the jump, this time with the album title and logo in place: 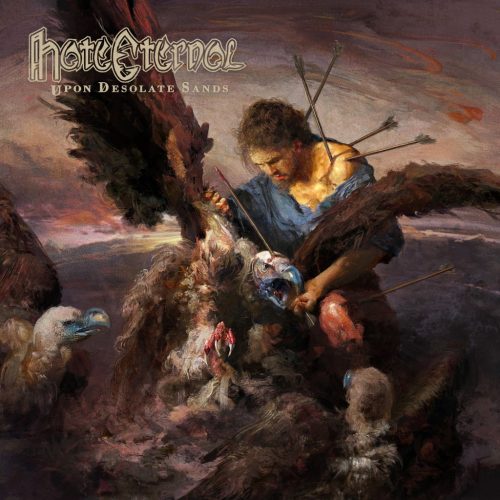 As you can see, the new album’s name is Upon Desolate Sands. The first single from the album is “What Lies Beyond“, and apparently what lies beyond is the wholesale slaughter of us, and our children, and our pets, and anything else that wriggles on the ground or flies in the skies. There are some nice punchy grooves in the song, but also a lot of cold-blooded viciousness and hot-blooded, lunatic murdering (just listen to that solo!).

Upon Desolate Sands will be released by Season of Mist on October 26.

At last, this week brought us a stream of the first new music off the new album by Finland’s Wolfheart, wrapped in a music video. The chosen song, “Breakwater“, isn’t quite the kind of cold and beautiful, doom-influenced epic for which Tuomas Saukkonen is perhaps best known, though there’s plenty of snow and ice in the video, with the vistas captured on Icelandic glaciers. No, this song fucking RIPS — and so there’s a lot of fire in the video, too.

The searing, soaring vibrancy of the main riff is undeniable, and the vocals soar as well, while the hell-for-leather fusillades of the rhythm section are enough to leave you breathless. There’s also a melancholy air in the melodic leads, especially when the pace slows and the sound softens, and an edge of pain when the vocals elevate, but there’s more fire than ice in this track. A big crowd-pleaser of a solo in this one, too.

Constellation Of The Black Light will be released on September 28 via Napalm Records.

The first single from Anaal Nathrakh’s new album, A New Kind of Horror, proved to be controversial, as I attempted to demonstrate by stitching together a froth of commentary about it by some of my friends and acquaintances. When I did that, I didn’t include my own reaction to “Forward!“, but let’s just say it was lukewarm. However, I’ve learned from past experience that you really can’t always tell a lot about an Anaal Nathrakh album based on what they choose as the first single. I wish I could be a fly on the wall when they discuss which one to pick, because I bet the conversation would be quite amusing.

A second song, which surfaced this week, is MUCH better. I hesitated to include it in this round-up because the YouTube stream isn’t an official premiere by Metal Blade. It’s one of those things that says “Provided to YouTube by The Orchard Enterprises”, and “Auto-generated by YouTube”. I’m never sure whether The Orchard is licensed to do this kind of thing, but the stream hasn’t been taken down despite the fact that it’s been splashed all over the web by other scurrilous metal blogs, so I decided to go with it. 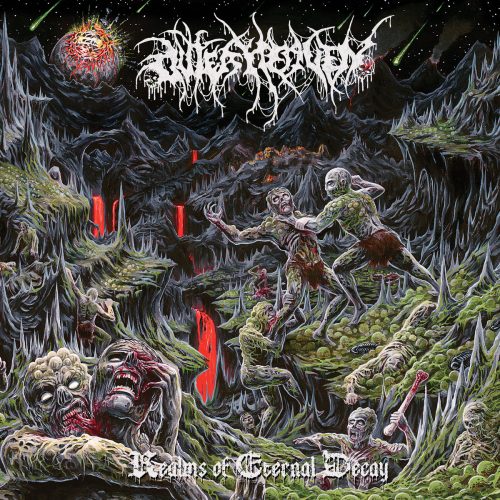 I’m way late in featuring this next track, which was revealed about 10 days ago. I leaped at the chance to listen to it as soon as I could, because Outer Heaven‘s new album, Realms of Eternal Decay, has been high on my highly anticipated list. But I just haven’t had time to compile a round-up since I heard it, until now.

“Bloodspire” originally premiered at DECIBEL, and it does a marvelous job of melding soaring, exotic melody, monstrous vocal horrors, utterly merciless, fast-paced death metal plundering, and utterly gruesome death metal stomping. This will get your heart racing, and the filaments of unearthly melody that flicker in and out are capable of raising goosebumps, too.

Realms of Eternal Decay is due out October 12th on CD/LP/Digital via Relapse Records. The ghastly cover art was created by Matthew Stikker.