Today’s torrent of e-mails in the NCS in-box included an announcement by Peaceville Records that a new Bloodbath album has been set for release on October 26th, the name of which is:  The Arrow Of Satan Is Drawn. Which is a very promising title, as are these excerpts from the press release:

Like all gore-drenched sequels, demonic death metal supergroup, Bloodbath’s fifth slice of morbid savagery comes even darker, nastier and sicker than before. It’s been four years since Grand Morbid Funeral, and Stockholm’s shadiest death cult – with members drawn from metal luminaries Paradise Lost, Katatonia, Opeth and Craft– return with a new slab of old-school, HM-2 driven blackness: The Arrow Of Satan Is Drawn

Recorded by Bloodbath and Karl Daniel Liden, at Ghost Ward, City Of Glass & Tri-Lamb Studios, during the first half of this foul year of our Lord, the album is the second with Old Nick on vocals. If Grand Morbid Funeral was a thick spray of deathly noise, on The Arrow Of Satan Is Drawn, it is the rotten, fetid state of the world and our inevitable doom that is casting a looming shadow over proceedings. With world leaders threatening nuclear annihilation in 140 characters over social media, capitalism tearing itself apart, a wilful march into a surveillance state via handy pocket spying devices, a shifting climate that appears to literally be trying to kill us… It’s all fuelled Bloodbath’s newest ode to filth.

And did you see that reference to Craft? The press release also tells us that for this album Bloodbath was joined by new guitarist Joakim Karlsson from that Swedish black metal band — which just makes me all the more hungry to hear what they’ve done. 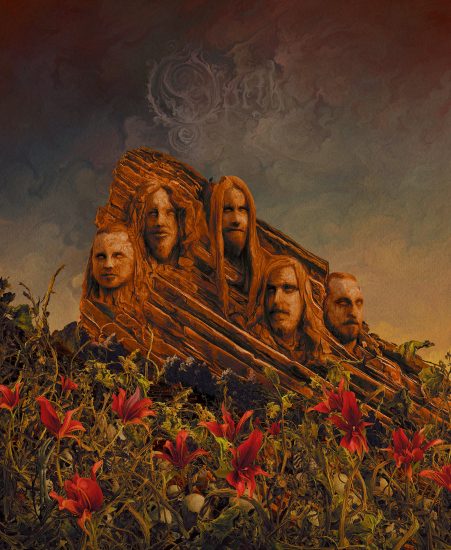 Perhaps you’ll follow my train of thought here, when I decided to include this Opeth news after that Bloodbath news.

And the news is that on November 2nd Moderbolaget Records and Nuclear Blast Entertainment will release Garden of the Titans: Live at Red Rocks Amphitheater (which includes cover art by Travis Smith). According to the press release:

This historic event was captured for the DVD, Blu-Ray and Vinyl formats during their performance May 11th, 2017 at the Red Rocks Amphitheatre in Denver, CO. Both the DVD and Blu-ray formats include CDs containing the audio as well.

You can chew on the track list below, and also check out the first single, “Sorceress”:

A track taken from the upcoming Drowned CD, Barús‘ debut album, due out on October 22nd through Memento Mori.

From a new single with the same title, which includes a live recording of “Descending Blade” as the B-side, and is available here:

From Spirit Crusher, Dödsrit’s second album, which will be released by Prosthetic Records on September 27. It’s available for pre-order here:

A single from this band’s next album, The Roots of the Concrete Age., to be released on August 30.