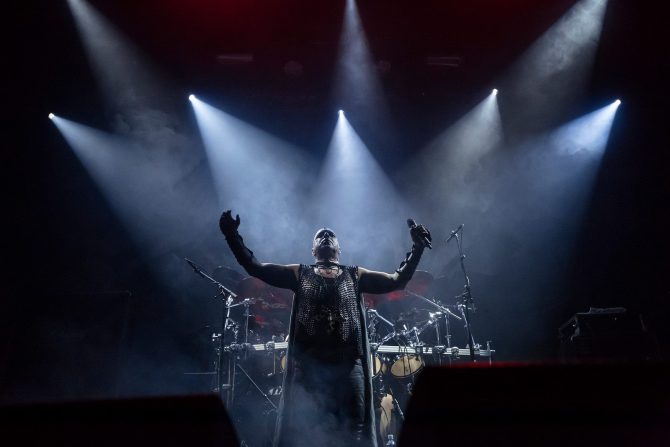 (Norway-based NCS contributor Karina Noctum was in Bergen, Norway last week for part of the latest edition of the Beyond the Gates festival. This isn’t a complete review of the fest, but rather some reflections about the location, some musical recommendations prompted by the line-ups, and impressions of some of the performances that made a particular impact. Credit for all the wonderful photos in this post goes to Jarle H. Moe.)

Beyond the Gates is a festival that takes place every year in the mythical Black Metal city of Bergen (at least, it certainly seems mythical). It’s a paradise for blackpackers (a name for the hopeful souls who make the journey to the land of Black Metal and if they do their research well may end up in Abbath’s garden), a good city if you are into grey, doleful weather and dark surroundings. You’ve got the beautiful and dark mountains of might surrounding the city; it rains pretty much every day; and as a consequence the shadowy forests will be under a shroud of fog. All in all, pretty Black Metal.

If you are considering traveling in spite of everything I’ve mentioned above then go here and you will find a comprehensive list of metal stuff to do in Bergen. I find Bergen a nice place since I like grey skies, dark forests, mountains, and rain, so being there is a happy experience for me, especially when combined with music.

Beyond the Gates has been getting bigger by the year, and it is an interesting festival. Next year’s line-up will be pretty Swedish, with Marduk and Watain on the line-up. Watain will play somewhere dark in Bergen, and they are probably bringing more blood, since the show is going to be special, so be there and get bloody. I hope I’ll be able to see Marduk— I won’t ever take them for granted.

This year I decided I’d go to Beyond the Gates because of the special performances of Enslaved and Taake. I love the black metal of the ’90s and this seemed a great way to revisit the spirit of that time. I’m fairly young, but I’ve spent considerable time listening to almost anything from the ’90s, and I felt compelled to attend, even though I had to miss the Thursday concerts, and even though some of the bands playing on Friday and Saturday were unknown to me since they are outside my usual genre boundaries.

But I’d like to talk about Thursday’s bands anyway because that was a perfect day. I decided I would work on Friday and be a responsible adult, even though my rebel side was cheering on the idea of traveling on Wednesday and getting to see Deus Mortem and 1349 the next day.

The Deus Mortem guys belong to a group of Polish Black and Death musicians who are involved with many bands of great quality. I can also say from previous experience that Deus Mortem live are amazing (and I’m writing this with a pang, having missed them last week). The related Deus Mortem bands worth checking are Anima Damnata, Azarath, Witchmaster, and Infernal War. 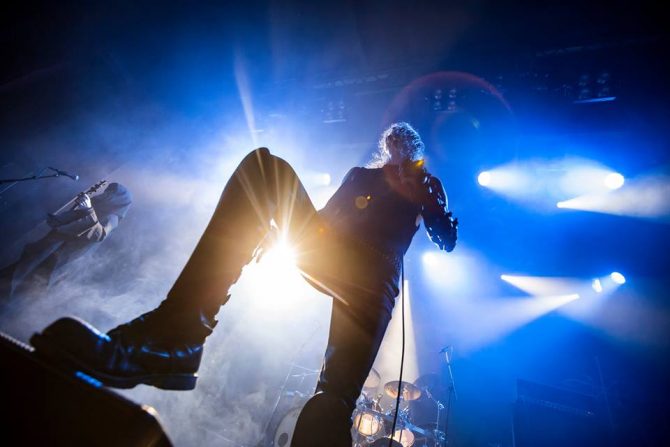 When it comes to 1349 I think I do not need to introduce them, and I will have to see them somewhere later; luckily they do play a lot, so I’m optimistic.

Another thing worth mentioning related to Beyond the Gates Day 1 was the special Mare show, which had been hyped for months. This is a BM band from Trondheim (the third largest city in Norway), and a part of the Nidrosian scene. What’s Nidrosian? Well, the word is taken from Trondheim’s old name Nidaros, which admittedly is a much more beautiful name! All these Nidrosian Black Metal groups are under a label called Terratur Possessions, whose roster includes many excellent bands.

One of the bands from this Nidrosian part of the roster, Whoredom Rife, recently toured the US with Profanatica, and they were also nominated for the Norwegian equivalent of the Grammy awards in the category of metal, an achievement that is frankly quite a feat. They are an up-and-coming underground band, and this nomination speaks tons about the quality of their music.

Another Nidrosian band worth checking from Day 1’s schedule is One Tail, One Head. I myself have had a good dose of them this year. I’ve seen them a lot and enjoyed every single concert since their blend of Black Thrash appeals to me in every way. If you haven’t listened to their music, you really should. Their final album will be released in October, and sadly, the band will be laid to rest after a December show in Trondheim.

So there you go: I’ve managed to write about Day 1 without being there (or at least about the bands who were there). About Day 2, I managed to get to Bergen early and right on time to catch Wrathprayer, who are from Chile and pretty old-school oriented. The music is dense and raw, and this is the band for those who like long riffs. I hadn’t listened to them before the concert, but the live experience convinced me to check out their music. 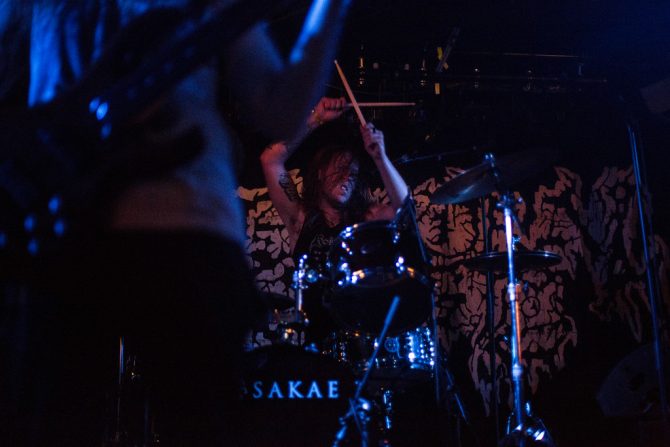 There was a fair share of American bands this year, including Blood Incantation and Spectral Voice. Of them all, I most enjoyed Spectral Voice and their dark, doom-infused Death Metal. I’m already impressed when drummers manage to fulfill vocal duties at the same time, and here the drumming had feeling as well. I mention that because I think that to find genuine feeling in drumming is not that easy, so it stands out when it happens. The whole performance of this band was an intense live experience. 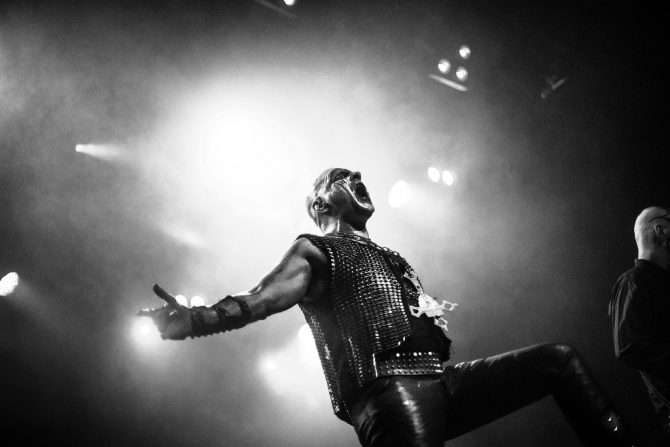 But Day 3 featured the best shows, in the back-to-back performances of Enslaved and Tormentor. Hungary’s Tormentor was Attila Szigeti’s band from the ’80s and it is often mentioned along with Master’s Hammer when listing influential bands from that time and region. I had always wanted to see Tormentor, of course. I even got to listen to some improvised Attila soloing, which generated a variety of creepy screeches that still had a tonality to them. I found it endearing, so it was an ear-balm. I would add that few vocalists are so versatile. 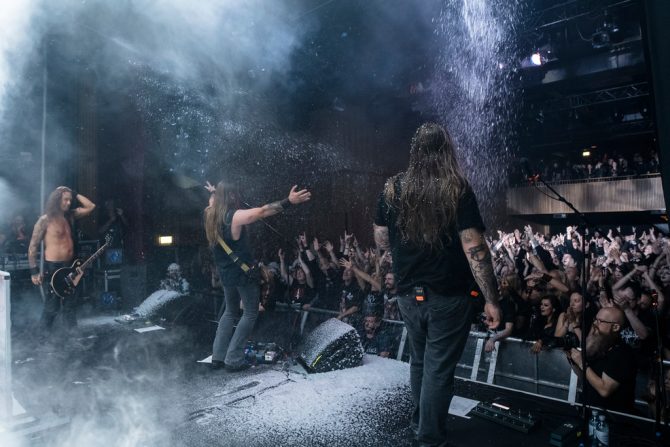 Enslaved were perfect. I enjoyed the whole atmosphere that they sought to recreate, as it reminded me of the kind of landscapes you see high up in the Norwegian mountains, and so it rekindled memorable past experiences in the midst of Norwegian nature. The only problem was that after the experience of their music I really wanted to go hiking in the mountains, so I could listen to Frost there, but the season is ending. What a perfect show it was, and a reminder of how cool it is that the retro wave is kicking in!

I highlight those two bands, but Taake appeared as well on Friday night (Day 2). It’s not that I’m a huge fan of all of Taake’s discography, but I really love their old stuff, and it was a huge influence for a great number of bands. 1999’s Nattestid is probably one of the most beautiful albums they have produced. I find it difficult to explain that music in words, and it is best to actually go and experience the whole thing (provided one is lucky enough to secure it in these troubled times).The harmonic beauty of the music translated well live, and made Friday a night to remember — because Taake played all of Nattestid live. (Listening to Taake also made me happy because the witch-hunt didn’t take the experience away this time, as it has many times before.)

P.S. While thinking back on Day 2, another concert I enjoyed greatly was Bölzer‘s, which immediately preceded Taake’s. Even though I generally prefer fast tempos, their live performance was solid, and one of the best experiences of the fest.

One Response to “A FEW IMPRESSIONS FROM BEYOND THE GATES 2018”