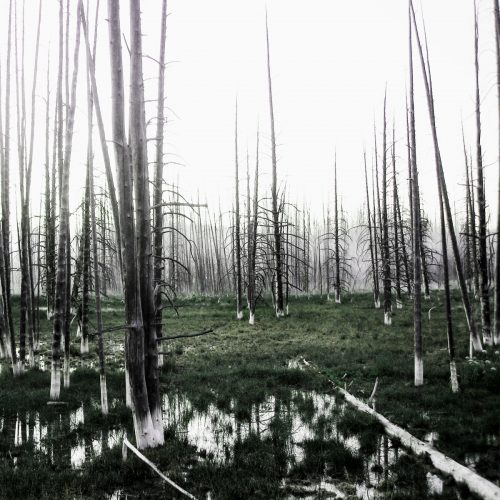 “Sleepless” is the name of the new song by the Roman band Seventh Genocide that we’re presenting today. Simply experiencing the changing moods and sensations of the music induces an interpretation of that title, which may or may not be supported by the lyrics. These changing and sharply contrasting sounds seem to capture not mundane insomnia, but a kind of severe sleep deprivation that leads to unbidden reveries, feverish paranoia, hallucinatory visions, and sudden discoveries of untapped energy whose reservoirs somehow haven’t yet been exhausted.

To come at the song in a different way, it is by turns hypnotic and jolting, dreamlike and savage, haunting and explosive. It’s quite an eye-opening trip, and a very enticing attraction for Seventh Genocide‘s new EP, SVNTH, which will be jointly released by Third I Rex and Toten Schwan Records on October 28th. 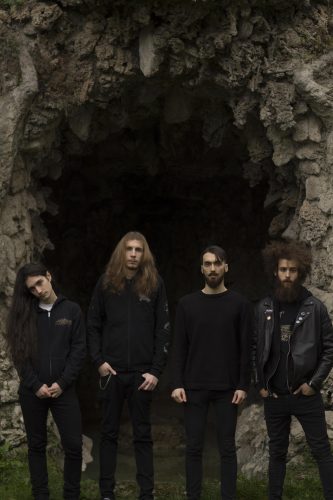 In genre terms, Seventh Genocide are hard to pin down, perhaps even more so now than at the time of their last album, Toward Akina (2017). One can tick off references to black metal, post-rock, and psychedelic music, with a nod toward experimental flourishes. Mention might also be made of ambient sounds and folk-oriented digressions with a dark cast. Just making a list like that might make you think of a juggler feverishly trying to avoid dropping any of the multi-colored spheres he’s whirling through the air, but Seventh Genocide make their amalgamation of myriad influences sound effortless. All those changing colors aren’t distracting; they just make the music more engrossing.

“Sleepless” is a prime example of this phenomenon. This 10-minute trip has a haunting start made of ghostly vibrating notes and layers of shimmering reverberation over a low bass pulse. The effect is hypnotic, but the revery doesn’t last. It’s abruptly interrupted by a jolt of high-voltage electrification. A darting and flaring riff leaps out over the rumble of double-bass and the metronomic snap of the snare, and high, jugular-slicing shrieks vent the lyrics. The riff twists into a dual-guitar flurry and then becomes an intense, savage gale of sound over blasting percussion.

But the band have more surprises to reveal, with an intermezzo in which the fever smoothly subsides and the band transform the song into an instrumental excursion that (in their explanation) “recalls the abstract vibes of Tortoise and Godspeed You! Black Emperor“. Spectral guitar reverberations sing over noodling bass notes and a head-moving drum pattern, and the music becomes even more moody, mystical, and mesmerizing when the drums fall silent. When the drums return, the psychedelic flavors of the music become more pronounced — and then the band break into a thrash gallop, laced with darting guitar flurries and magnetic riffing.

You might think that big rush would be the song’s finale, and you’d be wrong. The drums stop again; all you hear are those those cauterizing shrieks and swirls of ethereal guitar sound; and then spoken words over sinister ambient sounds that grow increasingly unsettling. Sleep still won’t come, even at the end. 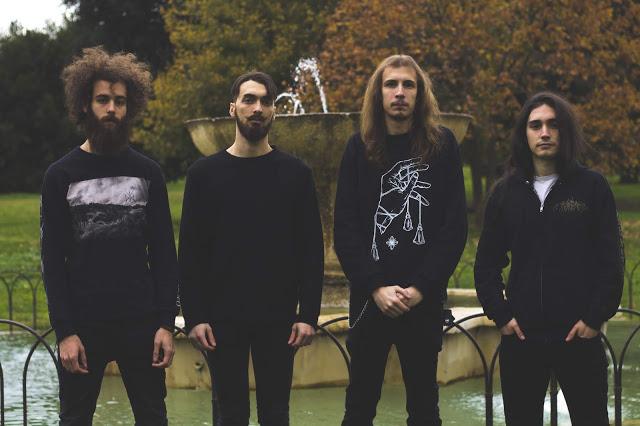 This new 30-minute EP was recorded in the fall of 2016 by Marco Mastrobuono (Hour of Penance, Buffalo Grillz) at Kick Recording Studio in Rome. The cover art was created by photographer Veleda Thorsson, whose images has appeared frequently with the works of Agalloch (one of the main influences identified by Seventh Genocide). Pre-order via Bandcamp below.