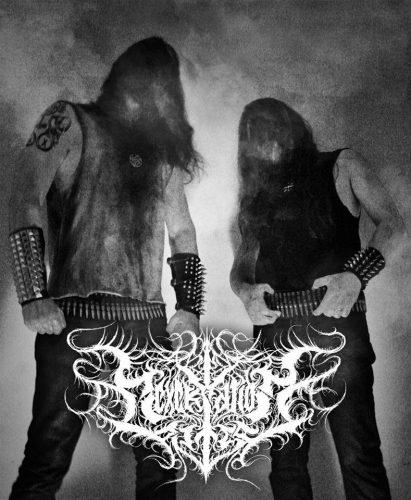 As most NCS visitors are well aware, we only write about what we enjoy and want to recommend, and that goes for the music we agree to premiere. But I will say, perhaps inadvisedly, that I really really really love this new song by Hexekration Rites. Really.

Maybe that word will seem too soft and sentimental for such head-hammering and harrowing music, which combines the heaviness of death metal and the esoteric atmosphere of black metal. Maybe “lust” is a better word, because the appeal of the music is definitely more carnal than romantic, more rooted in atavistic impulses and more likely to trigger primal reflexes. And as the song’s name suggests, “Chaos Absolution” is wild, channeling a feeling of frenzied liberation and savage ecstasy.

The sound is not pristine, and the deep, distorted, toxic tone of the riffs is a big part of its primitive appeal. In the opening minutes, the riffs move from hammering, slashing chords to bouts of boiling, berserker madness, the music rising and falling like some elemental creature made of flame. Coupled with the head-moving potency of the drum rhythms, the hammering sequences will make your skull want to pump like a piston. Coupled with the howling barbarity of the vocals and the screeching, yowling quality of the leads, the frenzied segments will get your blood rushing.

You’ll come to a bridge that mounts toward an even more powerfully head-banging sequence, but coupled with a wailing lead that maintains the music’s intensity, and then the band torque the tension tighter and tighter in a roiling effusion of incendiary chaos as the drums become more thunderous and clattering, the bass more viciously pugilistic, and the vocalist more vehement in his vicious vituperations.

“Chaos Absolution” is one of two tracks on this French duo’s debut (the other is “Unsubmission Chant“), which bears the unprepossessing title of Demo XXMVIII. Once you’ve heard the song, it will come as no surprise to learn that these two musicians (vocalist/bassist H.R and guitarist C.S) have been involved in other projects, though I don’t have a resume I can give you. I can tell you that they don’t intend to stop here — more Hexekration Rites creations will be forthcoming.

The demo will be released on September 14th by Atavism Records in a cassette tape release limited to 100 copies. I expect they will go fast. Check these links on the release date for info on how to get one: