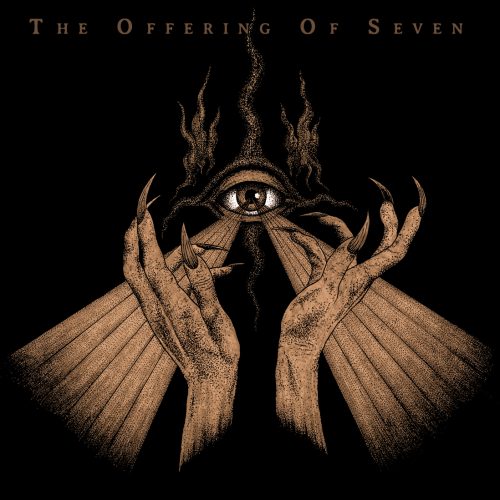 Ancient evil lives within The Offering of Seven, the new album by the Floridian black metal band Gnosis. The band twist their music into different cruel and often frightening shapes, through changing cadences and accented in different ways, but the atmosphere of the album is persistently and powerfully sinister.

The music is atavistic in more ways than one. It not only triggers primordial moods and primal reflexes, the music harkens back to the Greek black metal of the early ’90s, inspiring memories of such influences as Varathron and Thou Art Lord, as well as Mortuary Drape and Mystifier. And we have a full stream of the album for you today.

Gnosis have developed a consistent sound that suits their infernal objectives quite well, harnessing together heavy, prominent bass tones that clang and moan with monstrous power; high, whining guitar riffs and pestilential leads; eerie keyboard accents; stripped-down but always on-point drum work; and ghastly, imperious roars whose heartless, gritty tones sound as if they were recorded in a tomb.

The component parts may be consistent but the band deploy them in different formations, moving the rhythms from stalking marches to galloping charges, from dismal lurching movements to jolting, hard-punching attacks. They liberally lace the music with minor-key poisonousness and shroud it with the gloom of impending death, while bowing deeply to old, classic, heavy metal traditions. The music often sounds stripped-down and primitive, but those impressions can be deceptive.

The spirit of evil lives within the music, but is made manifest in different ways. And so the songs are militaristic and ritualistic, primitive and preternatural, reverential and bestially lusting, magisterial and cruel, sulphurous and serpentine. There are a few freakish and fiery guitar solos that leap out of some songs, and an interlude in the sixth track provides a sharp change, a bright and entrancing (though wistful) guitar duet over a slow pulsing and ticking rhythm. And one more thing: Gnosis are also quite skillful in getting your head moving, as you will soon discover.

The Offering of Seven includes intro and outro tracks (both of which are frighteningly foreboding), six other original songs, and a very fitting cover of “Evil Spirit” by the old German heavy metal band Running Wild.

The album will be released through Terror From Hell Records on September 21st, with distribution through Elektroplasma, Code7, and Clear Spot.

“Tiamat flies, on golden wings, in the skies, blacker”.