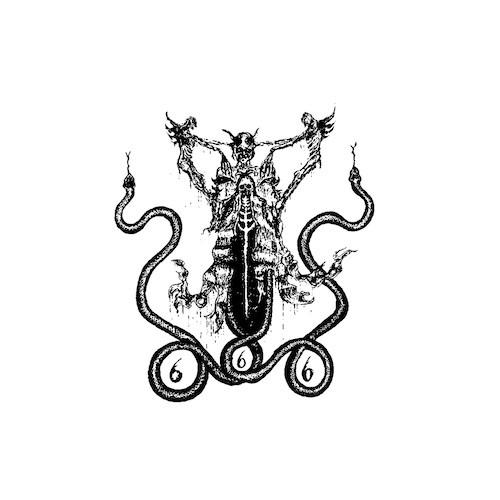 Last year the Portuguese raw black metal band Holocausto Em Chamas  made a strong recording debut, first with the Sermões da montanha demo and then participating in a split with the Icelandic band Óreiða, both of them released by Harvest of Death. Now, the same label is poised to release the band’s debut album — לָשׁוֹן הַקֹּדֶשׁ — on October 5th. Today we present the first public stream of the entire album.

It would be difficult to overstate the intensity of the terrors transmuted into sound through these 11 songs. Almost every song presents alternating sequences, interweaving different infernal ideas and arcane energies — from wretched, malignant doom to virulent black metal malignance (with tonalities of gothic horror rearing their head as well) — and all of them stinking of sulphur. The movements are narcotic and necrotic, murderously delirious and morbidly oppressive, and most definitely not for frail ears or fragile minds. 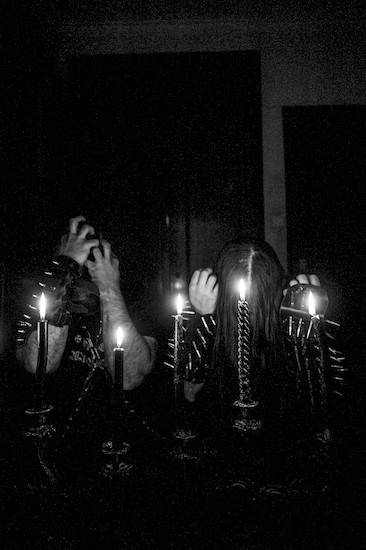 The calculated timbre of the sound quickly becomes apparent — the degree of guitar distortion is toxic, the drums have a primitive and often ritualistic resonance, and the vocals are just terrifying. In fact, it’s hard to stress enough the blood-freezing impact of the voices on this album, a mix of foul retching sounds, incinerating yells, unhinged shrieks, and other ear-mauling expressions of agony, ecstasy, and unfiltered hate. They seem spontaneous and are often wordless, and are never less than horrific.

The opening track, “Coroado com espinhos”, is the only track on the album that doesn’t change much — it’s a slow, heaving juggernaut of poisonous riffing, gunshot drum rhythms, and an initial dose of those wild, reverb-drenched vocal terrors (though it does close with wraithlike, shimmering ambient tones). The remaining ten tracks embody unnerving alterations of different kinds, including stormfronts of blasting drums and raw, ravaging riffs with an aura of grim majesty; rhythmically pile-driving chords and snapping snare strikes; stalking cadences and dismal chord reverberations; lurching momentums backed by wretched melodies; and calamitous cacophonies of demonic hysteria.

Imperious drum rhythms and waves of magisterial, organ-like shimmering lend a creepy mood to “Via Crucis”; “Sermões da Montanha” delivers hammering rhythms beneath a shroud of bleak, plague-bearing guitar sound (as well as an explosion of utter mayhem); “After the Crucifixion” combines measured beats and a riff that exudes utter desolation and terrible misery, but gradually accelerates, becoming increasingly feverish, hateful, and head-moving; momentous percussive pounding and chords that ring out like supplications to a dark eminence begin “Narcotic Invocation of the Tormentor”, and the track further includes a buzzing, rising and falling, riff that seems half-anguished and half-exultant — and becomes a groaning, grievous slog through a lake of congealing viscera.

In the remaining tracks, the music channels dread, disease, and violent dementia. There’s also a head-nodding, punk-like quality to the rhythms and chord progressions in “Claustro dos Mortos” (along with other segments that are ghastly and queasy), and the closing track (“The Sombre Disciple”) at first has a kind of swinging, mid-paced cadence (with a sinister, pulsating guitar sequence); transforms with a jabbing, atonal riff and a bubbling bass line; and becomes a miasma of guitar distortion and clattering drumwork.

As the album ends, it sounds as if someone is hammering nails into our coffin as we suffocate in the blackness beneath.

Steel your nerves and listen below, where you’ll also find the pre-order link.