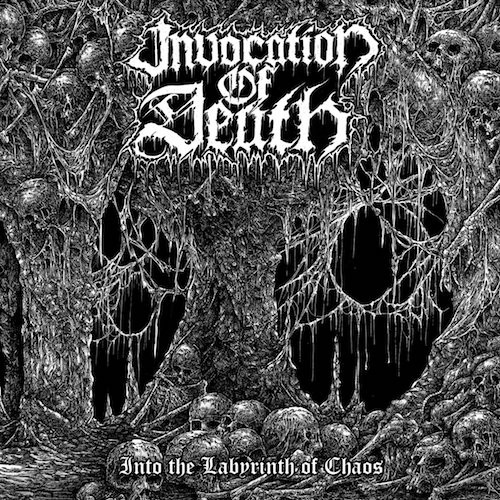 It’s really hard for me to imagine that any died-in-the-wool fan of morbid, old school death metal won’t embrace the song we’re about to premiere by Invocation of Death — even the cold-hearted curmudgeons who sneer and sniff at anything recorded after about 1995. The song is just so brimming with gruesome life, and so packed with changing tempos and addictive riffs.

The song in question is “The Art of the Deformed“, and it closes Into the Labyrinth of Chaos, the debut album of this Salvadorian group (who originally called themselves Antares Death) which is set for release on October 18th by GrimmDistribution (Ukraine) and Morbid Skull Records (El Salvador). 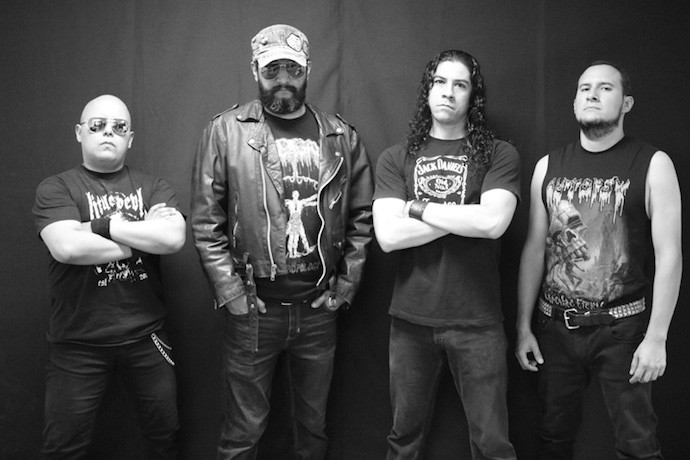 The band’s labels recommend the album for fans of Entombed, Dismember, Grave, and Unleashed, and the music does invoke such memories, but it really does sound vibrantly (and ghoulishly) alive, in ways that undermine any claim that the band are mere copy-cats or clones.

Much of the song’s appeal can be sourced to its dynamism. It’s sinister, ghastly, and even sickeningly dismal — and it’s also a massively destructive juggernaut. It deals out differing doses of macabre sound, one after another, and then quickly reprises all of them in an electrifying finish.

The massive, and massively toxic, guitar tone makes an immediate impression, through riffs that are alternately angular and swarming in a carnivorous frenzy, backed by the snap and crack of the snare drum. When the drummer shifts the pace to a galloping and bounding gait, the vocalist blasts a noxious, vicious torrent of words — and then things change again, the music segueing into a queasy, fluid riff that oozes disease over a flurry of blast-beats.

The changes don’t stop there. A pulsating guitar bridge leads to a bruising, head-moving, chest-jabbing chugfest, and then the guitars generate dismal, pealing tones over huge bass thrums, followed by a murderous, mid-paced, pile-driving riff (another big head-mover) paced by the clatter and thump of the percussion. And then, for the finale, there’s that rapid reprise of almost everything that has come before.

GrimmDistribution and Morbid Skull will release the album in a CD edition with an 8-page booklet, limited to 500 copies, and featuring that striking cover art you see at the top of this post. If our own premiere isn’t sufficient inducement for you to grab this album, you can also check out a previously released track, “En El Altar De La Misantropia”