“Veins” is the first track released (just yesterday) from Majestic Downfall‘s new album, Waters Of Fate, which will be released on December 7th by Solitude Productions and Weird Truth Productions in Europe and Asia and by Chaos Records in the Americas. If you couldn’t guess based on how much praise we’ve heaped on this Mexican death/doom band over the years, this album is one we’ve been eagerly looking forward to. If possible, I’m even more eager now that I’ve opened those Veins.

To borrow the words of Thomas Paine from almost 242 years ago, which again ring true today, “These are the times that try men’s souls” (and it must be a trial by fire for the souls of women). Daily abominations abound in the news headlines each day, at least for those of us living in the U.S. Discouragement and depression vie with panic and rage as the dominant emotions. If emotional intensity could power turbines, electric utilities could be shut down as unnecessary; we’d have no need of them to keep the country’s power grids running.

“Veins” could serve as an anthem for these soul-trying times. Slow tears weep from bruised eyes in this music, and it also channels crushing pain and a level of desolation that seems unsurvivable. It howls in agony, roars in furious defiance, and glimmers with faint and forlorn hopes, mixing ethereal reverberations, bludgeoning chords, drum blows you can feel in your spine, and vocals that are riveting in their intensity. It becomes feverish and fierce, demands retribution, and reveals the magnificence of imagined triumph.

The sequence near the end in which a glorious guitar solo is followed by a head-moving bass solo, and then by one last heart-pounding surge of power before the soft, chiming notes of grief return, is especially wonderful. And there’s enough emotional intensity in the track to power a large city. Once you’ve heard it, “Veins” will stay with you.

Waters of Fate consists of 52 minutes of music. It was mastered by Tore Stjerna at Necromorbus Studio in Stockholm. The European/Asian version of the album will contain one bonus track for a total playing time of over an hour.

The fantastic cover art was created by the Brazilian artist Ars Moriendee.

About 10 days ago, the French band Eryn Non Dae. released a live performance video of “Astral“, which is lead track off their latest album, Abandon of The Self, which we premiered earlier this year along with Andy Synn‘s review in advance of its release by Debemur Morti in March.

When we also co-premiered “Astral“, I wrote: “Unsurprisingly, given the band’s history, it’s a multi-faceted experience, one made of intricate, body-moving rhythmic propulsion, flesh-scouring riffs, scraped-raw vocals full of pain and flame, flickering, boiling, freakish guitar lines — and reverential clean singing. The song is an intricately crafted and textured piece that’s brutal and bleak, incendiary and incandescent, earthy and alien. It delivers both compulsive physicality and immersive atmosphere. And it’s undeniably an attention-grabbing way to start the album”.

It really is a riveting piece of music, and the experience of watching it performed live is equally gripping, given the high quality of this video. It was captured at Les Lunatiques Festival in Rennes on September 22 of this year. 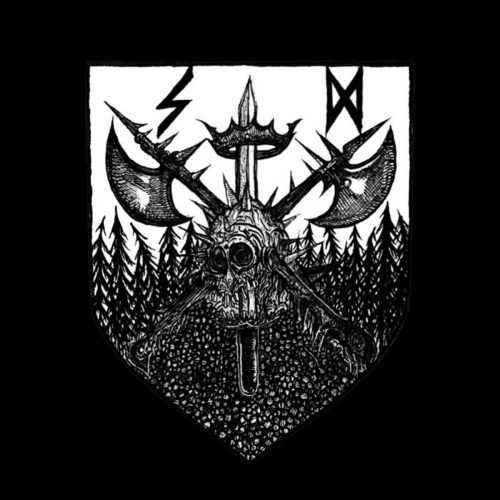 Last year we had the pleasure of premiering the debut album of this Cleveland black metal band, whose line-up consists of vocalist Sean Deth (Lucian the Wolfbearer, Ulven, Witchhelm), guitarist Dominic Passalacqua, and drummer Jesse Greenfeather (Cholera). As I wrote of Beyond the Veil of Shadowlands: “The music is sulfurous and savage, but its ferocity is more than matched by the appeal of its dark melodies and the dynamism of its rhythms and energies.”

Last week Burial Oath released a second album, and it somehow escaped my all-seeing eyes that the album was on the way. I haven’t spent a lot of time with it yet, but so far it’s pushing all sorts of my pleasure buttons.

Subjugation of the Bastard Son was recorded live, and it has the sort of immediacy and visceral power of a powerhouse live performance. The vocals are persistently scalding in their intensity; the blazing, booming, and hard-rocking drumwork seizes control of your pulse; the deep bass thrum seems like a frantic heart; and the riffs are irresistible, whether the guitars are racing in a ferocious fury or jangling and jumping. The music is often black-hearted and bleak, but the energy is nevertheless explosive, and the hooks in these songs are razor-sharp.

A few sobering breaks segment these torrents of electrifying and virally infectious sound (the prime example being the acoustic finish to “Crown of the Black Altar” segueing into the brooding intro of “Hail To the Eternal Flame”), and the music captures moods of frenzy and despair as well as hard-knuckled hostility, bounding resilience, and a kind of bleak (and sometimes blazing) grandeur. It’s the kind of record that richly rewards a complete listen from start to finish because these dudes do such a fine job filling these songs with dynamic twists and turns, and giving each one its own memorable qualities. 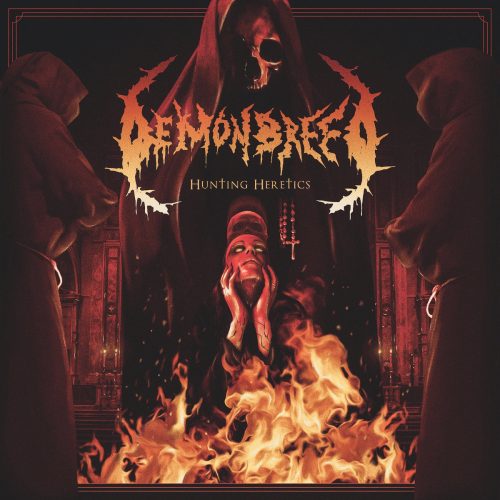 I overlooked the debut album (Where Gods Come To Die) of the German death metal band Demonbreed when it was released two years ago, but now I’ve got their second album on my radar screen thanks to a stream of the title track that surfaced yesterday. I learned of it via a Bandcamp alert for Testimony Records because I bought the Panzer Squad album released by the same label.

The new Demonbreed album is named Hunting Heretics, and it’s set for release by the afore-mentioned Testimony Records on December 14. The title song is a vicious, heavy-weight powerhouse, combining mountainous grooves, slaughtering, swarming riffs, pulsating guitar leads that are damned catchy, and heartless howling in the vocal department. It’s a nasty piece of work for sure, right down to the slow, dismal, decaying finale — and the first thing I wanted to do after it finished was start again at the beginning. 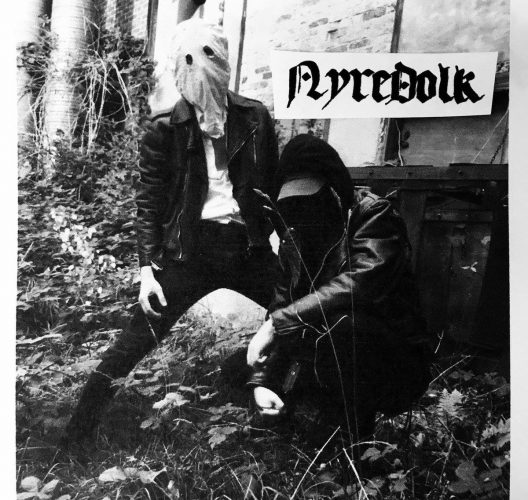 According to Google Translate, NyreDolk is Danish for “kidney-dagger”. And that’s all I know at this point about this new Danish band, other than a glimpse of the music off their debut demo, MMXVIII, which surfaced recently. The one song from this four-track release that’s available for listening now is “Blottet for Empati“.

“Black metal punk” is the way Caligari Records describes the music, and the label also accurately refers to it as “a lysergic and nefarious assault”. This particularly song does alternate between a punk-like bounding cadence and episodes of unhinged viciousness (the vocals in particular are especially unhinged). But as you move further into the track, it also becomes nightmarish, harrowing, and hallucinatory. The band’s success in interweaving so many changing phases of sound makes the song a stand-out.

MMXVIII will be released on tape by Caligari later this month (I don’t have a specific release date, and it’s not yet available for order). 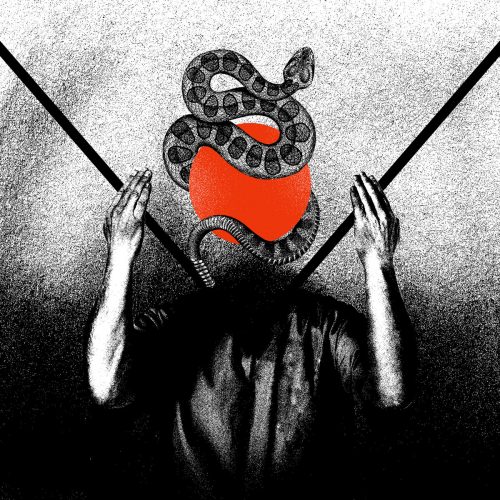 I listened to this next EP (which was released on October 3rd) because I was intrigued by its ominous title — I Must Have Peace and This Is the Only Way — an because I was both intrigued and amused by the e-mail we received from this Chicago band: “Recent feedback has us seated somewhere in and around the snotty angularity of The Blood Brothers and the overarching belligerence of Converge with some sludgy, doomy explorations thrown in. Feedback abounds.”

All of that proves to be true. What’s also true is that the battering drum cadence and darting guitar work at the beginning of the first song (“GCC“) hooked me immediately — it’s a hell of a way to start a record. And the song just gets more gripping and electrifying from there, thanks to heavy yet super-nimble bass-work, an explosive drum performance, braying and boisterous melodic lines, and raw, berserker vocals. Yes, there’s feedback, too — as well as a sequence of seething guitar wash that will put your teeth on edge.

It really is an outstanding way to start a record, such a surprising full-throttle rush that you can’t help but stay locked in to see what Ribbonhead do next. And what they do next is churn out one intensely magnetic song after another. In fact, it turns out that they could have started I Must Have Peace… with any of these tracks and set the hook just as effectively. Surprises continue to abound; the dynamism in the opening tracks is on display in all the others; Ribbonhead continue to prove that they’re capable of beating you black-and-blue, crushing all your hopes, and making you feel like you could conquer the world.

And they salt these songs with so many memorable melodic accents, both bright and calamitous, that the EP has pulled me back to it repeatedly since the first listen. Very impressive stuff indeed.