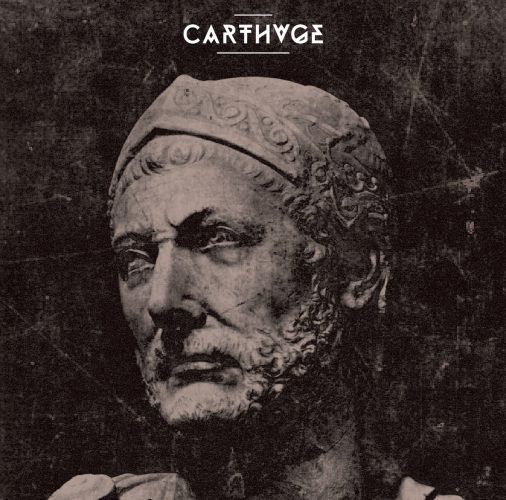 (Andy Synn reviews the debut album by the Greek death metal band Carthage, which was released on October 5th by Amputated Vein Records.)

I don’t know about you guys, but I am absolutely swamped at the moment, with various issues in both my personal and professional life constantly competing for my valuable time, which is leaving me with surprisingly few opportunities to put digital pen to electric paper and get some damn writing done!

Despite all of this, however, I’m going to endeavour to get as many pieces published this week as I can – including a mix of big names and new contenders – starting with the debut album from Greek Death Metal duo Carthage.

Addressing the elephant in the room straight away, there’s very little chance that Carthage are going to be accused of possessing a surfeit of originality, as the sound on their debut album is heavily indebted to the bombastic brutality of Hour of Penance, Hideous Divinity, Hate Eternal, etc, with perhaps a dose of bludgeoning Deathcore catharsis thrown in for good measure.

But while it doesn’t set out to reinvent the wheel, the fact of the matter is that it doesn’t need to, since these ten tracks (clocking in, collectively, at just under twenty-nine and a half minutes) make for one hell of an intense, rollercoaster ride of pulverising power and unadulterated aggression when all is said and done.

Granted, the relentless, rapid-fire nature of the tracks occasionally makes them blend together into one overwhelming whirlwind of blasting drums, bestial vocals, and neck-wrecking riffs, but – for the most part at least – Leonidas and Philip are careful to ensure, or at least attempt, to give each track something to make it stand out from its brothers.

The ominous instrumental intro of “Dido’s Land”, for example, is a perfect companion to the blast and burn, chug and churn, assault of “The Fields of Zama”, which in turn compares favourably, but not identically, with the menacing metallic mass of “Crossing the Alps” and the utterly raging “Hasdrubal”.

And while tracks like “Death in Trebia” (and, to a lesser extent, “Siege of Saguntum”) might be accused of being a little too short, and a little too rushed, to really fulfil their full potential, on those occasions when the punic pair take a moment to allow their music to breathe – such as on the previously mentioned “Crossing the Alps”, or incredibly dense closer “Carthao Delenta Est” – you get the feeling that they’re teetering right on the edge of something truly special.

So if, like me, you’ve been looking for a fresh taste of superior sonic brutality lately, then look no further.