(Wil Cifer reviews the new album by Evoken, which will be released by Profound Lore on November 9th.)

Funeral doom might be my favorite subgenre of metal, with depressive black metal not far behind. It invokes deeper emotional layers and creates powerful sonic places than doom bands content with just worshipping Black Sabbath. Jersey doom band Evoken might be America’s best when it comes not only to funeral doom, but to doom as a whole.

On their new album Hypnagogia they pick up where they left off with Atra Mors. There are a few changes, such as synths being more prevalent in the mix, which creates thicker atmosphere. Mood-wise the album is dark yet not as filled with despair as the previous album. Lyrically, it uses World War I as a metaphor regarding more personal topics. This is done without the need to maintain some contrived narrative that concept albums tend to have. 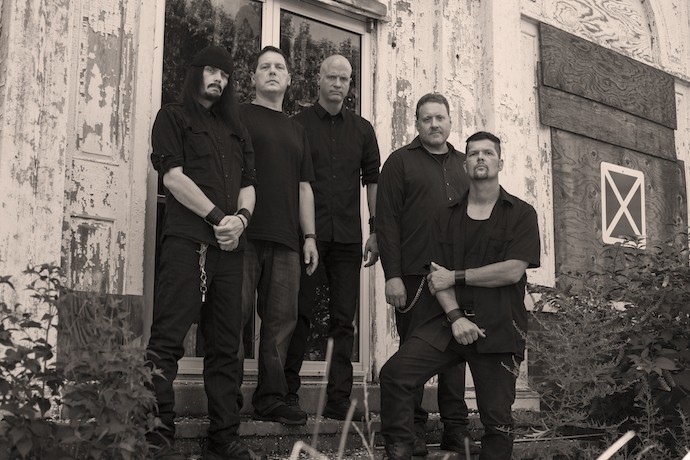 There is even a blackened section in the second song when the tempo speeds into blast-beats. The bulk of the album stays in the romantic, lush, lingering of funeral doom without the hesitation boring you. There are some great guitar melodies that lure you further in. The low growl of the vocals doesn’t drop into the typical gurgle of funeral doom, but has more of a death metal rasp to them.

The increased presence of synths mentioned earlier is displayed right from the beginning. It’s not done in a flowery manner, but with an elegance that brings to mind early My Dying Bride on the song “Schadenfreude”. The vocals are low and spoken in a more gothic style than they are growled, before things bubble to a boil midway into the song. Not taking the easy way out by just busting into the expected crunch of distortion, they hang on the ambience and decorate the subtle swell with guitar melodies.

While the album largely expands the idea of what funeral doom can be, Evoken do indulge fans with its more traditional form  on “To Feign Ebullience”, the vocals coming in at a little lower growl. Considering some of the album’s twists and turns, this song hangs on the funeral march pretty consistently, with guitar embellishments keeping it from dragging. Strings chime to add another color before the song’s end.

The title track is an instrumental that hovers on the atmosphere more fervently than the songs before it.”Ceremony of Bleeding” is not only the album’s most dynamic song, but it’s also its heaviest. The aggressive growls are excellently layered.

The album closes with “The Weald of Perished Men”. Never coming close to even the 11-minute mark, these guys prove themselves masterful songwriters who don’t feel the need to drone on to make their point. The beginning is dreamy with low goth-like vocals bringing a darker shade against the music. It builds as needed to give them a big metal ending draped in mournful strings.

This album not only finds the band continuing to progress, but it gets better with each listen. It will please long-time fans with enough familiar sounds to make their journey forward into new territory an easy transition.

One Response to “EVOKEN: “HYPNAGOGIA””