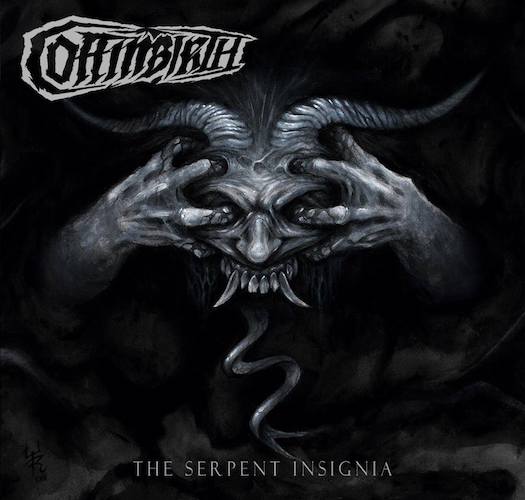 Here’s a little mental exercise, in three steps. Step One: Gaze upon these names and the roles they perform in the new band named Coffin Birth:

Step Two: Imagine what these men might do if they fully embraced the filthy, corrosive wonders of the HM 2 pedal in capturing, through a nasty amalgam of old school death metal, rock ‘n’ roll, and punk, the sensations of “being forced out of a dead body by its own gasses, drenched in the slime of bodily fluids and reeking stench”.

Step Three: Consider further what might happen if they did all this in a song about a post-apocalyptic scenario — with a title inspired by the Teenage Mutant Ninja Turtles. 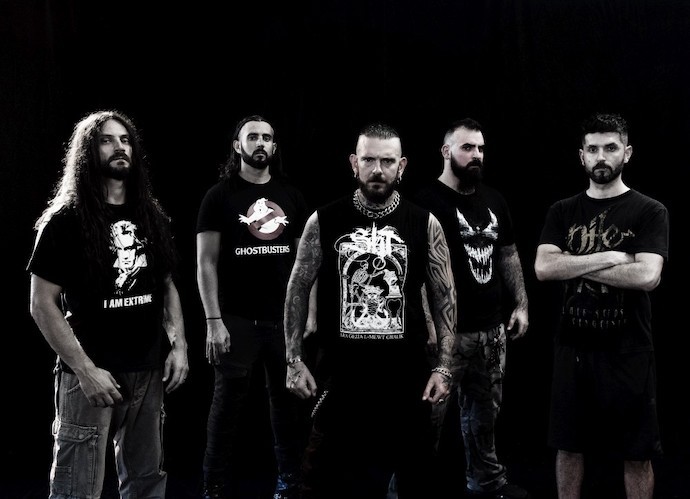 Are you still with me? Are you maybe a little bit excited by our thought experiment? Well you should be, because this isn’t just a mental exercise, it’s a musical reality.

Here’s what the band have told us about the conceptual focus of the Coffin Birth track we’re premiering today through a lyric video — “Red Sky Season“. It’s intended to depict:

“A post apocalyptic scenario in which Earth has rid itself of the most unwelcome guest … the human race. In its solitude the planet is now a lifeless and uninhabitable environment for any being or organism, and the terrain is covered in thick, blood-filled rain which pours incessantly from the sanguinary red skies”.

And this is what the band’s vocalist and lyricist Frank Calleja has explained about the song’s title (which will warm the hearts of many of us):

“Being an ’80s kid, one of the most popular shows back in the day was the Teenage Mutant Ninja Turtles, a show that aired for the first time in 1987. It went on for 10 seasons going into the 90’s with the last 3 seasons seeing the show go through dramatic changes in an attempt to make it more appealing for a more ‘mature’ audience. The animation became darker, the humour was toned down, and the color of the sky in each episode was changed to a continuous and ominous dark-red sky. These last 3 seasons in fact are commonly known by viewers as the ‘The Red Sky Seasons’ and that is where the inspiration for this song title came from. I took that title, re-imagined the concept and gave it my own twist”.

The final reality is, of course, the music itself.

And oh hell yes, the song is drenched in that much-loved and completely filthy HM-2 tone. The riffs are heavy and toxic and as aromatic as a roiling vat of sewage. Those molasses-thick tones generate currents of melody that are diseased and dismal, but the song is anything but lethargic — because (hell yes) it rocks and romps, batters and bruises, stomps and slaughters. And if the  impact of the instrumental execution by these experienced musicians (accented by a sinuous and sickening solo) weren’t ravaging enough, Frank Calleja‘s ravenous howls and grotesque retching expulsions give it an extra measure of horror.

“Red Sky Season” is one of 10 hell-raising tracks on Coffin Birth‘s debut album, The Serpent Insignia, which will be released on November 30th by Italy’s Narcotica/Time To Kill Records with support from MiBACT and SIAE. The genesis of the project was explained as follows by Giulio Moschini:

“One day Marco and myself started experimenting with the legendary HM2 pedal from the ’80s in an attempt to add some new flavours to the Hour of Penance sound but it turned out that we simply could not incorporate its sound into the music because of the tremendous amount of gain and noise that this small pedal produces. However, since we are both huge fans of that exceptional, vintage yet brutal tone we started writing music on the side. Unknowingly and in a short time we ended up with 10 kick-ass songs ready to be recorded. It was at this point that we decided to turn this into a proper band and went on to give a call to some friends with whom we’ve travelled and toured throughout the years. This was the right occasion to make some kick-ass music together!

“The first person we called was our close friend Francesco Paoli (Fleshgod Apocalypse), who also was part of the Hour of Penance line-up from 2006 to 2010. Shortly after we contacted Davide Billia and Frank Calleja from Maltese deathmongers Beheaded to complete the Coffin Birth line-up, which we are extremely happy with”.

We’re extremely happy with it, too, from the music to the horrifying cover art by Roberto Toderico (Asphyx, Pestilence, Sinister).

And now we present “Red Sky Season” — as well as a video for “The 13th Apostle“, which premiered at DECIBEL.