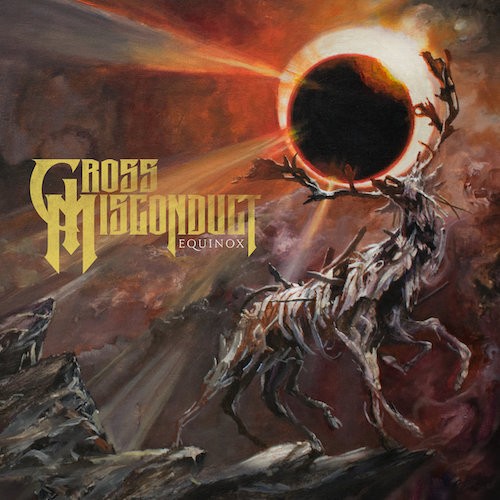 Having been established in 1999, Gross Misconduct from Vancouver, British Columbia, are entering their second decade, and are on the verge of releasing their third album, Equinox, on November 2nd. Over the course of their first two full-lengths, The Process of Indoctrination (2007) and The Disconnect (2011), the band moved from high-octane thrash to a more progressive sound in the latter album. But seven years have passed since that last album was released, and in that time the band have further expanded the genre elements of their music.

The line-up of Gross Misconduct consists of guitarist/vocalist Jesse Brint, bassist Julian Kenchenten, drummer John Kurucz, and guitarist/vocalist David London. On Equinox, they’ve not only amalgamated the frantic thrash of the first album and the more progressive elements of their second one, they’ve also incorporated other hallmarks of extremity, which you’ll hear in the album’s dynamic title track that we’re premiering today. 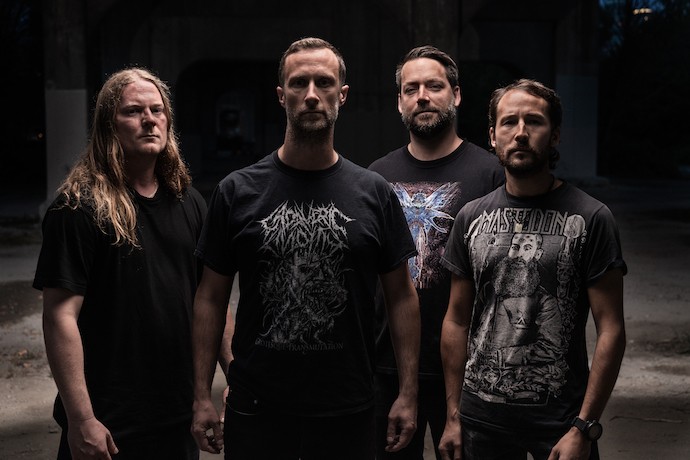 Regarding the title track, Jesse Brint tells us:

“There are a lot of parallels between ‘Equinox’ and ‘Of Redemption,’ which was the lead track on our last album The Disconnect. Both were the final songs written for each album and ended up being the lead track. It was a pretty easy choice in both cases. ‘Equinox’ sounds like it could have been on our 2007 debut The Process of Indoctrination, in that it focuses on the thrash roots we all grew up on.

“But there’s also death metal in there, along with some black metal and some more of the progressive elements of our sound. The lyrics straddle both myth and reality, and ‘Equinox’ tells the story of a person in power whose lust for more ultimately results in them losing everything.”

Jesse Brint‘s description of the moods and musical elements of the song we’re presenting rings true when you here it. Although he didn’t mention the wistful acoustic folk picking that begins the track (which is linked to some of the melodies you hear later on), the music soon segues into a much heavier and much faster experience, one that includes jolting rhythms and jabbing riffs as well as the high boil of tremolo chords and vicious, gritty roars in the vocal department.

The band do ease back on the throttle as bleak, blaring notes ring out, and a grim, tension-torquing riff eventually holds sway. Over a fast-punching percussive rhythm, a swirling solo unfolds, and a flickering and frenetic riff provides the foundation for a second, more squalling solo. And when the fretted frenzy mounts again and the drums discharge in a blasting intensity, a gleaming melodic lead soars from the tumult.

In describing the sounds of Equinox, Gross Misconduct ask you to “imagine Cynic with a dollop of Death, a smattering of The Crown/Mastodon/Gojira, and healthy doses of 1980s Metallica and Slayer“. And as a further sign of these intersections of sound, we’re giving you a chance to hear not only the title track but also a previously released song, “A Place of Bones“.