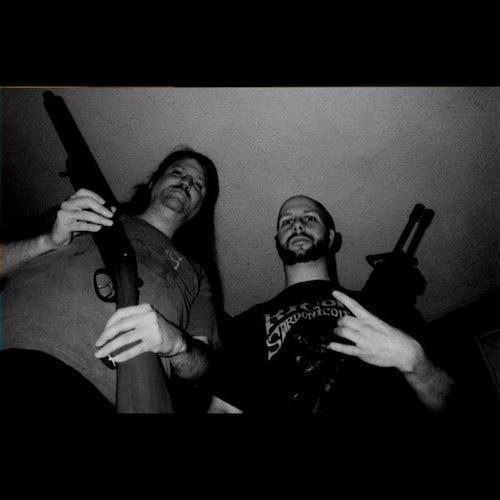 Rigor Sardonicous was born in 1988 somewhere in Long Island, but despite that long history this death-doom band remains one of those deep-rooted in the underground outfits with almost nothing you can read about. Actually, it’s hard to find lots of followers when the band fights for a bloody low, almost primitive, sound…

However, Joseph Fogarazzo (guitars, vocals) and Glenn Hampton (bass) have kept it untouched for more than two decades. So if you’re ready to learn a few more things about this obscure and death-soaked outfit, let’s try. Joseph found some time to answer my questions.

Hail Rigor Sardonicous! So it’s said that the band was founded in 1988, and that means you have its 30th anniversary. How do you plan to celebrate it?

Greetings! Yes it was, though that was before my time with the band, which began in 1992.

Really? So who are the band’s founders? How were you involved in the band?

Glenn founded the band. The concept originated around 1982, but he could not find anyone with the same musical vision. It just floundered around until we got together in another band called Abhorrence. When that band died, we put all of our efforts into Rigor Sardonicous.

What was your vision of Rigor Sardonicous back then during the first years? What kind of musical and lyrical ideas did you want to express through the band?

Our overall vision has not changed.  We were firm about what that was from the start because it was simply an expression of what we were feeling.  We strove to catch very deep and primal emotions where sensation can only be noticed and not verbally expressed. 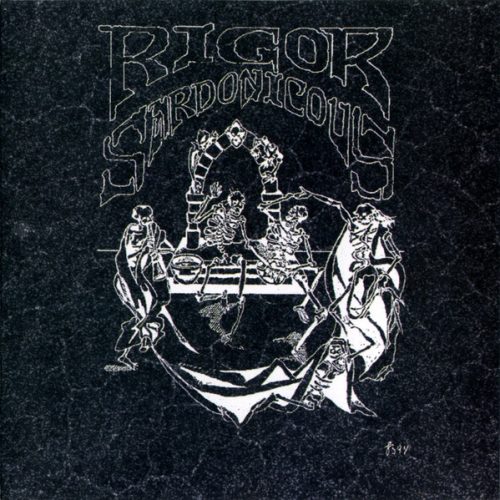 Your first record was the demo Risus Ex Mortuus released on tapes in 1994, so how did you spend the period before this recording? Did you play live or did you just write some stuff?

In the early days we did play some shows, and writing came about fairly easily.  Once we set the idea and decided to direct this particular outlet we came up with songs quickly.  Some were already from the years prior.  We just ran with it and let it evolve.

What kind of sound did you want to get for Risus Ex Mortuus? What were your influences?

We tried to get the sound to reflect the sound we had from our own gear, though we did not have the fullest capability of doing that at the time.  We took influence from varied sources and many of them are not metal.  Autopsy to Dio-era Black Sabbath to Mazzy Star to Beethoven and Slayer were among some of our influences.

There are some controversial lyrics on this recording, you know — songs like “Homophile Necrophilia” and “Jewish Massacre”. What did you want to express through these texts?

“Homophile Necrophilia” was written precisely because it was revolting and based on a true incident.  “Jewish Massacre” is about the historical occurrence from WW2.  It took no political leaning one way or another and the title is simply very direct about the subject matter.

What about other song lyrics? Horror movies, death in itself, social shit? What inspired you?

Death in all of its mannerisms. 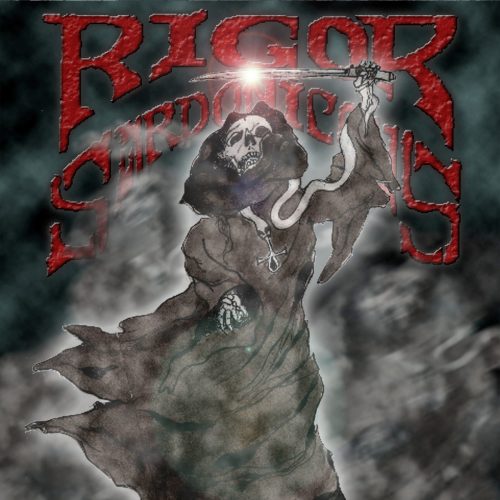 Apocalypsis Damnare, the band’s debut full-length, was released in 1999. It took some time to record these songs. How did you record them? What are your memories of this recording session?

On this album I felt that I found my way within the style we were striving for.  We were in a death metal band prior. and on Risus Ex Mortuus my songs reflected the shedding of that format.  Overall we felt really good about Apocalypsis Damnare and we learned much more about the recording and mastering process and felt more comfortable in our musical style.

The album was released in the DIY way. Did you search for a label? How did you organize promotion and other things?

Both Risus Ex Mortuus and Apocalypsis Damnare were released on our own.  The demo was not always well received and we did make attempts to find a label.  Like anyone else who has attempted this, it can take a lot of time and expense and you learn along the way while making enemies. 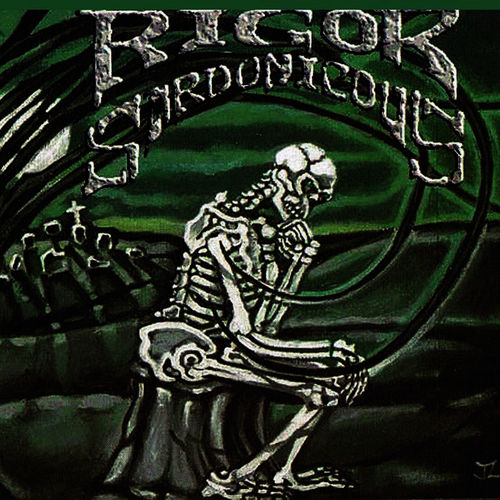 Your sophomore album Principia Sardonica appeared only in 2005. What slowed you down? How much time did Rigor Sardonicous take in your life?

Doing the promo work on our own is what caused us to slow.  With life, work, schooling, and expense it became too much to keep up with.  Jim from Paragon Records at that time offered to release this album.  We are very grateful to him because he took a chance on us when many others would not and he knew how to do it right.

The album was recorded at Smiling Death Studios. It sounds like you have your own studio, is that right? How much time did you spend on this recording session?

Yes, it is my own room and has gotten better over the years, as have I.  This latest session did not take too long in terms of hours, though it was not done all at once but all within September.  I was sick with a fever when I tracked the drums and guitars so they took much longer to do.  I also lost my voice and that took nearly a month to come back from well enough to record. 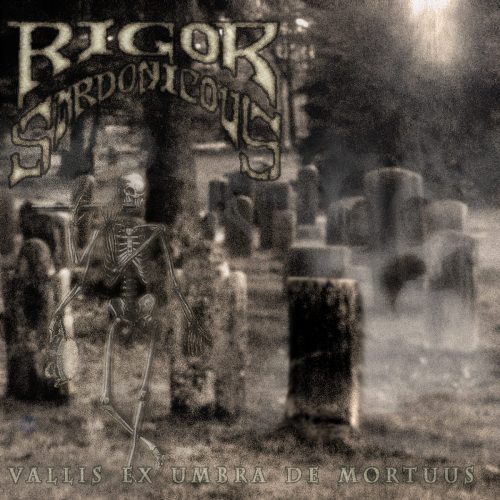 After the re-recording and reissue of Apocalypsis Damnare and Risus Ex Mortuus you came up with new material on Vallis Ex Umbra De Mortuus. How do you see your progress on this record?

We see Vallis Ex Umbra De Mortuus as a continuation of what we sought to do.  It was a very collaborative effort among Glenn and I.  As the layout of that album shows, it was focused on dead and dying children.  There were more songs that were intended for this release, but an obligation to do a split CD with the band Dimentianon, which I was also in at that time, came up, so in a last-moment struggle we took 2 tracks from it for the split Amores Defunctus Tuus Mater.  Also, the lyrics for “Intero Parum Infantia”, on our new release Ridenti Mortuus, was originally planned for Vallis Ex Umbra De Mortuus.

Why did you pick up that topic (dead and dying children) for this album?

I always had a particular fascination for that, perhaps because I dwelled on death so much as a child.  But probably the main impetus for this was learning of Gustav Mahler’s Songs On The Death Of Children.

As I understand, most of the time you record your stuff with a drum machine. Is that really enough for you or is it just difficult to find a proper drummer as a band member?

Using a drum machine, other than for demo purposes, was never the plan.  In fact, it was the original drummer’s idea to get this band going again after the project we were in failed.  For some reason drummers have shied away from us and we made several attempts with others since, even within the past year, but the end result was always the same.  Drummers suck. 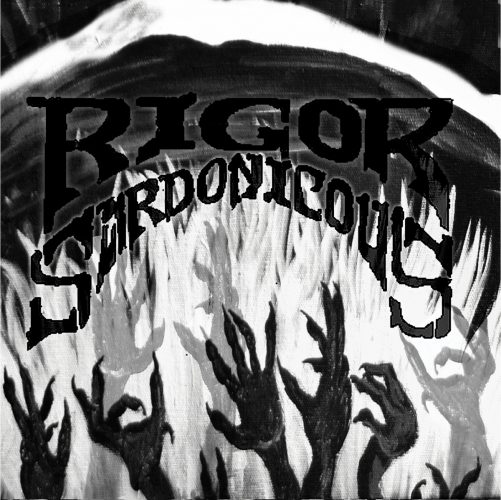 Your latest album Ego Diligio Vos has the same raw and old school vibe as other Rigor Sardonicous records. Is it your conscious goal to keep the sound that way? Are you satisfied with the result?

I actually remixed that album before its release because we felt it was too clean, and we despise that type of sound.  We are very pleased with the result, and it is a full lyrical concept tale of death and love.

Wow! Such a turn! How did you miss that at the studio? I’m meaning… well, I just wonder what does “clean” sound mean for you?

We were thinking it was not so bad during the initial mix but after reflecting on it for a few days afterward we realized that some of what we call the “feraliminal” sound of Rigor was not really there.  The low end was weaker because I rolled too much off and the guitars had too much clarity and not so much of the “fuzz” that many have called it.  I find that many mixes tend to be bright — too much high EQ is often a culprit.  We don’t mind, and in fact prefer, lo-fi elements to a mix and not hyper-blasting it with compression. 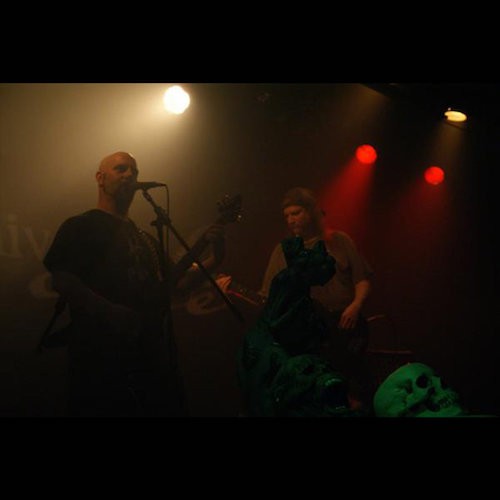 What makes you today, after these 30 years, keep Rigor Sardonicous active? What’s the main cause of this necessity to transfer such negative vibes? By the way, does NY help with gaining such inspiration?

We still feel the same as we did then and that is the driving force.  Some people seem to “mellow” over time, but I am just as angry and hateful as ever.  This world, being what it is and the inhabitants in it, will never allow that to diminish.

Oh, yes indeed, being in NY helps keep that momentum.  NY used to be known as a place where tourists were open prey, everybody had to stand their ground, and you needed very thick skin and a weapon at all times.  Now it is a pathetic haven for weaklings and cry-babies who are too stupid and inept to keep themselves from shedding tears if they simply hear what they deem to be a bad word.  This planet cannot end soon enough.

Yes, that photo with you and Glenn holding rifles in your arms… I was thinking you’re from Texas! Is Long Island such a hard place to live?

Like anyplace else it has its problem areas but problems can scatter about.  I can say all that current stuff in the media about MS-13 is largely true.

There’s news that the band already has a new EP, Ridenti Mortuus. What kind of stuff did you put there? Is it the same macabre and low Rigor Sardonicous we know?

Expect more of what you have come to know from us, as and some have regarded this as our best work so far.  Perhaps some of our past detractors may come to appreciate this.  We will see what transpires. 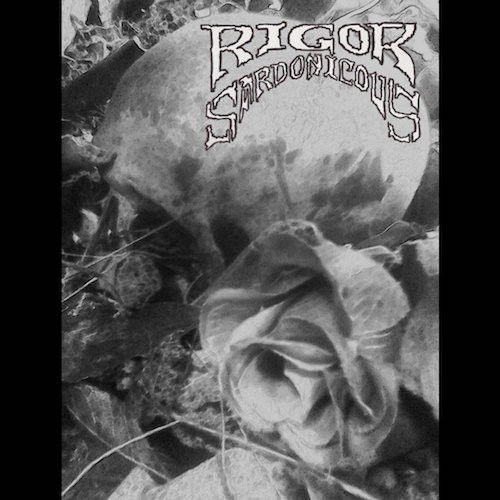 The physical release of the EP was delayed literally today. What happened?

We did not plan on doing a physical release on our own since we would likely sit on them, since they do not seem to move much anymore.  We would like to see a physical release for certain, but as for right now it is a cost-and-benefit thing.  Even a short-run pressing would be expensive, so the word was put out for anyone who might be interested in doing a physical pressing for their label/distro.  The actual release date of Ridenti Mortuus on Bandcamp is November 11, 2018 at 11:00 AM UTC, and is in honor of the end of WW I, as the track “The Smiling Dead” reflects.

Any plans for a new full-length release?

There are definitely plans for more.

Did you ever regret that the band has stayed deep in the underground for years despite being actually one of first extreme doom bands in this area?

Not really, since we expected this.  We didn’t fit into the mold and we were not, and are not, going to pander to those who want us to.

How would you sum up Rigor Sardonicous’ ultimate message? What’s it all about?

Fear, death, hopelessness, and dread in a realm beyond mere human words.  You have nothing and ultimately you are nothing, so get over your damned, lame selves.