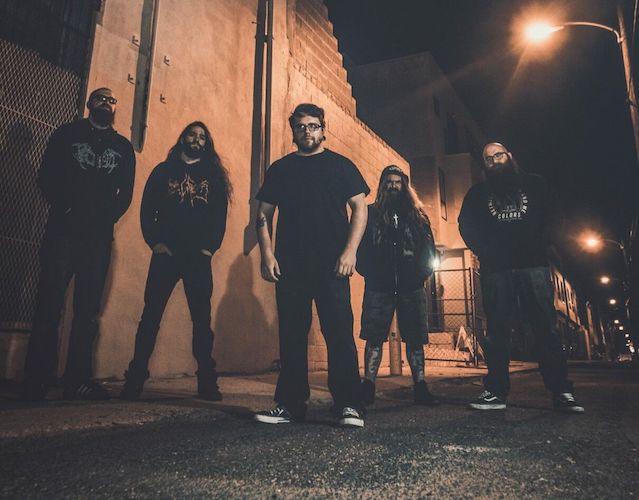 (In this month’s edition of THE SYNN REPORT, Andy takes on the discography of New Jersey’s Cognitive, including their newest record, which is being released today by Unique Leader.)

Despite being commonly tagged as “Technical Death Metal” in most reviews, features, and press releases, New Jersey crushers Cognitive have always leaned much harder towards the “Death Metal” side of the equation to my humble ears.

Don’t get me wrong, over the course of seven years and three full-length albums (the most recent of which is set to be released today via Unique Leader) the band’s roster has contained some seriously technically talented individuals, all of whom have been capable of unleashing some searing sonic shred on their respective instruments.

But, ultimately, the key feature which has united all the band’s members and albums is an unwavering commitment to blistering brutality, with nary a hint of compromise or restraint along the way, which makes them perfect candidates for this month’s Synn Report. 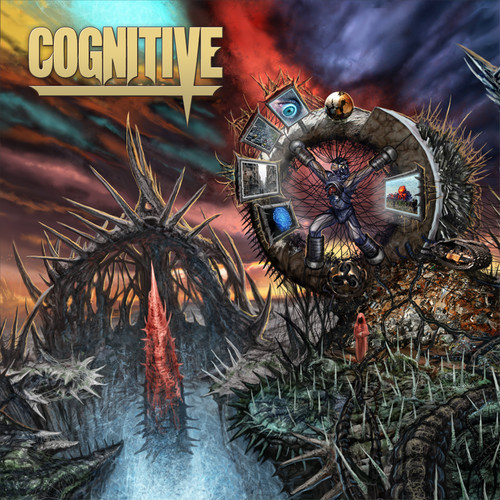 The band’s self-titled album kicks in hard with the sledgehammer heaviness and ferocious, bestial vocals of “Cut the Fuck Up”, whose skull-smashing riffs and pneumatic rhythms also conceal an undercurrent of creepy, ambient menace, following which the churning guitars and gruesome gutturals of “The Aftermath” ensure that the bar of brutality remains almost obnoxiously high.

“Blood Hungry” possesses not only one of the best titles on the album, but also an impressive knack for intertwining humongous grooves and sudden spasms of spiky technicality, all topped off with the gut-rumbling growl of vocalist Jorel Hart, while “Worlds Beneath” introduces an extra dose of melody into the proceedings through some wickedly infectious lead guitar work, without losing an ounce of OTT intensity.

“Regurgitated Existence” is a controlled explosion of lurching riffs, lacerating blastbeats, and chunky, chugging breakdowns, including a climactic collapse drawn straight from the Suffocation playbook. It’s followed by the atmospheric, acoustic interlude of “Oceanic Erosion”, which provides the listener with a few minutes in which to catch their breath before the unexpectedly proggy and melodic “Willingness of the Weak” and the uber-devastating “Imbuing the Wrath” ramp things back up to punishingly heavy levels.

With “Fire From the Sky” the band throw a whole heap of influences into the blender – from Tech Death precision and punchy Deathcore belligerence to some surprisingly Old-School Death Metal grooves – and spin the whole thing up into a blood-drenched whirlwind which, in turn, leads into the cyclical riffs and ominous voice-overs of “Afflication Humanity”, concluding the record with what is, essentially, one massive, convulsive breakdown. 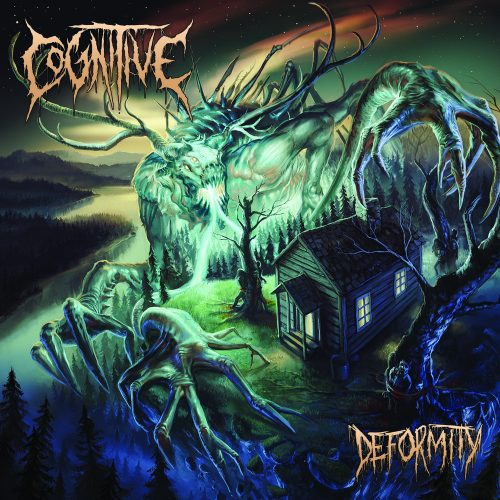 Album number two saw the band undergo a significant line-up shift, adding both a new guitarist (Harry Lannon) and a new bassist (Ian Bainbridge) in order to produce an even harsher, even heavier sound than the one found on their debut.

This extra degree of extremity is immediately apparent on ear-scraping intro track “Awakening the Miscreation”, and even more obvious on the mind-bending, fret-melting, neck-wrecking “Birthing the Deformity” which, over the course of just under four maniacal minutes, unleashes an almost Cryptopsy-like level of calculated chaos.

“Haunted Justice” is a merciless masterclass in pretty much every aspect of Death Metal, from churning chuggery and choking dissonance to chattering, nailgun rhythms and bone-grinding breakdowns (along with a dash of poisonous melody), that frequently feels like it’s about to fly right off the rails and yet somehow manages to maintain its cohesion despite its brain-mangling structure, while “Beneath the Floorboards” is a tad more straightforward (relatively speaking) but still packs in a punishing plethora of groovily gruesome riffs, strafing blastbeats, and ridiculously heavy hooks into less than three-and-a-half minutes.

The blast and groove, sturm und drang, of “The Forgotten” splits the difference between the belligerent brutality of Blood Red Throne and the caustic assault of Cattle Decapitation, but errs even more in the latter direction with its moody, melodic mid-section, showcasing in the process the band’s burgeoning progressive inclinations, after which the bruising chug and scrape of “Dead Soil” and the frenzied bombardment of “The Cull” find the group going all-in, balls-deep, 110%, on delivering nothing but pure, unadulterated Death Metal from the classic Cannibal Corpse/Dying Fetus school of sonic savagery.

The band continue to not pull any punches on “Wraiths”, whose stunning, stomping riffs pummel the eardrums like an avalanche of elephants tumbling down a concrete staircase, before the album concludes with the hammer-smashed heaviness and blistering, almost blackened blastbeats of “Merciless Forest”, which concludes one of the most crushing albums of 2016 with one of its most crushing tracks. 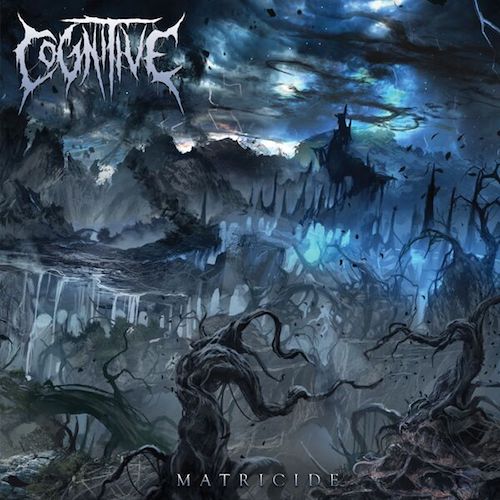 With both a new singer and a new drummer joining their ranks, Cognitive’s third album is leaner, meaner, and (arguably) more technical than ever before, kicking off with the free-wheeling, throat-ripping assault of “Omnicide”, which immediately showcases both the venomous vocals of new frontman Shane Jost and the band’s even more developed grasp of razor-sharp dynamics.

“Architects of Misery” is possibly even nastier, and even more technical, than its predecessor, with the quintet throwing a veritable barrage of bombastic riffs and tormented twists (and more than a few tumultuous turns) at the listener in a scorching, sub-two-minute span, after which the virulent, headbang-inducing strains of the title-track continue to demonstrate just how good the Cognitive crew are at delivering maximum impact and maximum destruction while also keeping things as cruelly catchy and hellishly hooky as possible.

The glass-chewing vocals of Shane Jost and the devastating drums of Armen Koroghlianare both front and centre throughout the three-minute-massacre of “False profit”, constantly driving the song forwards with their relentless energy and aggression while Lannon, Bainbridge, and Wharton (the band’s main songwriter and sole surviving original member) gallop and trem and chug and shred their way through a dazzling array of twisted riffs, while the frenzied creativity display on “With Reckless Abandon” recalls the caustic catchiness of modern Cattle Decapitation (albeit with less proggy melody and more ‘core-ish discordance).

The blazing dissonance and slippery bass-lines which underpin “Clouds of Rust” are but two of the ways in which the song bucks the established trend(s), with the band pursuing a much more off-kilter and unpredictable path on this one,which frequently zigs where you expect it to zag (and vice versa).

It’s still a vicious, nasty piece of work of course, but its very unpredictability (switching nimbly from clanging, stomping grooves to scathing blastbeats to soaring, spiraling solo work) immediately makes it stand out from the pack.

By contrast “Fragmented Perception” is a smidgen more predictable, structurally at least, in its deployment of chunky, chugging rhythms and bone-rattling beats… although even here the band aren’t afraid to throw a curve-ball right at the very end, with the inclusion of some proggily atmospheric lead guitar work that would probably fit in pretty seamlessly on the next Fallujah album (whenever that’s meant to be).

“Vessel of Violence” errs back to the band’s earlier, Cryptopsy-based influences, mixing frenetic fretwork and frantic vocals with a dash of murderous groove and a splash of dark melody, before the Cattle Decap-esque “Torn From the Void” – six minutes of destructive riffs and subtle melodic embellishments which also serves as a brilliant showcase for the ever-evolving vocal abilities of Shane Jost – raises the bar quite significantly.

Concluding with the moody, piano-based outro of “Denouement”, Matricide could (and should) well be the album to finally break the band out into the wider Metal scene, without betraying their gnarlier roots in the process.