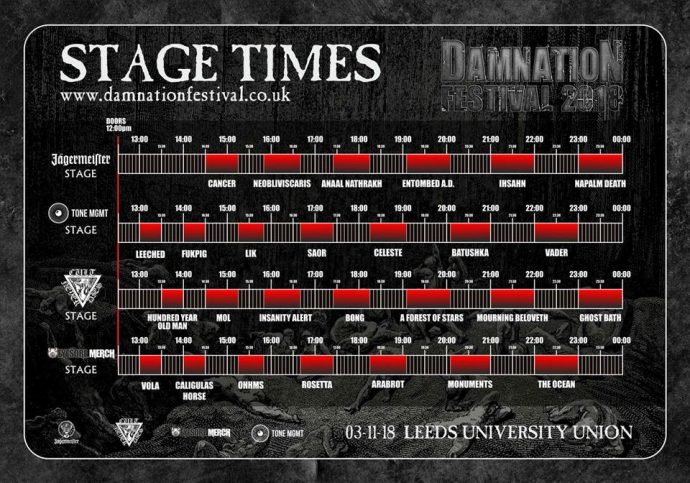 Exactly one week from today I’ll be back traversing the hallowed halls of Leeds University Union, which is once again playing host to another edition of Damnation Festival.

It’s a little-known fact that Leeds was actually one of my preferred choices when applying to university, but probably more widely-known that Damnation is one of my favourite festival experiences of the year (alongside Inferno and MDF, which suggests that I’m much more of an indoor festival guy) and one which I would recommend to any fan of the heavier side of music, in all its glory and variety.

Once again this year’s festival features a wide array of hand-picked bands drawn from across the Extreme/Alternative spectrum, running the gamut from legendary artists to up-and-coming contenders, so I’d like to use this column to highlight a few of the ones I’m most anticipating.

Right away there are three bands I simply refuse to miss, and who you can be sure I’ll be grabbing a spot for right away.

Then there’s those ever-reliable purveyors of punishing extremity, Anaal Nathrakh, who never disappoint and who’ll be bringing their own particular brand of horror to the Jagermeister Stage late Saturday afternoon.

Last, but by no means least, Blackened Post-Sludgecore pioneers Celeste are a band I’ve been a fan of ever since their first album yet who I’ve never had the chance to see live. So, as you can imagine, I’m extremely excited to finally get the chance to fix this egregious error.

THE BEST OF BRITISH

There’s a host of British bands performing at this year’s edition of the festival, but there’s three in particular I’m looking forward to.

There’s Mancunian three-piece Leeched, whose star is rising pretty rapidly these days, and whose new album I said some pretty nice things about in my review.

Then there’s Hundred Year Old Man and their almost insufferably dense yet incredibly dynamic blend of Sludge, Doom, and punishing Post-Metal (which you can read more about here).

And, of course, a name that should be familiar to many of our readers, the ageless atmospheric Black Metal of Saor, who are making an extra-special live appearance at this year’s fest.

Damnation Festival is always a great place to discover new bands, and rediscover old favourites, and this year looks to be no exception.

The down and dirty Death ‘n’ Roll of Entombed (yes, I know that, for legal reasons, we’re supposed to refer to them as “Entombed AD” but, c’mon…) is a sound I’ve loved in all its grim and groovesome forms, and I fully expect Petrov and co. to put in another beautifully brutal show next weekend.

On the other hand, although they’ve been together since 2011, this year’s Damnation Festival will be my first opportunity to check out Australian progsters Caligula’s Horse, a band I’ve been hearing a lot of good things about recently (including from some of my own bandmates).

And while every year the organisers of the festival do their very best to keep clashes to a minimum or, at the very least, to try and ensure that those bands which do clash don’t divide the attendees too much, probably the biggest and most difficult clash of 2018, for me at least, is between The Ocean and Vader.

The former, of course, are one of the “it” bands of the moment, and deservedly so, considering their rich pedigree and plethora of impressive albums already under their belt (including the forthcoming Phanerozoic I).

The latter, by contrast, are more “classic” than “current”, but can still run rings around bands half their age, and never fail to bring the thunder.

So… this looks like it’s going to have to be a decision made with my gut on the night!

Of course, this doesn’t cover all the bands performing at this year’s edition of the festival, and I’m also interested in checking out whether the buzz around Lik and Batushka stands up to close scrutiny, but these are definitely going to be my primary targets, and so you know where you’re likely to find me if you’re also going to be in attendance!

2 Responses to “DAMNATION FESTIVAL 2018: A PREVIEW”