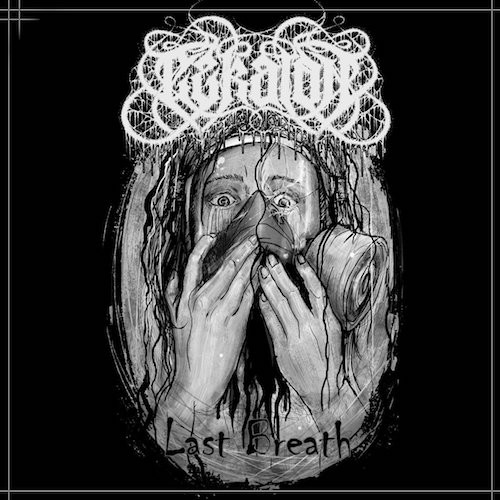 I’m in the midst of a 4-day vacation in Las Vegas with my spouse and her sister and sister’s husband. Blogging has not been on the menu of activities. Getting more than about 4 hours of sleep a night hasn’t been on the menu either.

I did manage to extricate myself from one outing this morning, but spent an hour on the phone with internet support trying to get good enough wi-fi in the hotel room to stream music. Long story short: my time alone is now about to run out, and so this edition of SHADES OF BLACK is going to be shorter than usual.

In April of this year I came across a spellbinder of a song from the debut album of this Ukrainian black metal band, and quickly showered it with praise. Later, I discovered that the album as a whole (Plague for the Empires: Time) was also really powerful. And now Ezkaton will soon be releasing a new EP.

Entitled Last Breath, the EP will be released on October 31st by Black Dwell Records (cassette tape and digital download). The EP consists of three tracks — “Luring Needle“, “Last Breath“, and an instrumental named “Wisdom“. Of those three, only the title track is now available for streaming on Bandcamp, but the band shared all three tracks with me, and so I’m able to at least briefly comment on the EP as a whole.

The vibrant opening chords of the mainly mid-paced title track, which you can hear through the stream below, generate sensations of terrible emotional pain almost immediately, and the gleaming lead guitar melodies that are interspersed with it juxtapose feelings of beautiful melancholy. The song is tremendously heavy, thanks to the earthquaking impact of the bass- and drum-work, and the vocals are shattering in their expressions of torment.

Yet there is defiance and fight in the music as well; and no matter how depressive its atmosphere, it grows increasingly mesmerizing and intense as the minutes pass (and the bass will really get its hooks in your head in the closing sequence).

To backtrack now, the opening track, “Luring needle”, is just as emotionally powerful, and perhaps even more desolate in its atmosphere. The sound is just as tremendously powerful as the title track, and the lead guitar resembles a terrible wailing, like the keening lament of thousands from some terrible catastrophe. Even accompanied by those mind-fracturing vocals, the music still somehow engulfs and captivates the listener — and it builds to a climax of absolutely incinerating force, as if translating into sound the sensation of every nerve ending of a tortured soul being burned to ash.

And that leaves “Wisdom”, the instrumental track — which storms from the first moment, immersing you in blizzard-like gales of intensity, while the rhythm section creates the sound of the earth fracturing in a cataclysm. The overpowering sonic force of the track subsides in the mid-section, but the chiming arpeggios that surface then are no less emotionally intense, and also prove to be intensely memorable.

The music of “Wisdom” truly saturates the senses, creating a blend of agony, soulfulness, and grandeur that stays in the mind long after the song ends. (And although the track is described as an instrumental, I could swear I heard voices — though it may just be another manifestation of how haunting the music is.)

Ezkaton have proven again that their particular blend of atmospheric, depressive black metal is a multi-faceted experience that’s possessed of far more visceral power and spellbinding impact than much of the music you might encounter under that genre label. It’s well worth pre-ordering now, but at least mark your calendar to listen to all three tracks on the release date (October 31st). 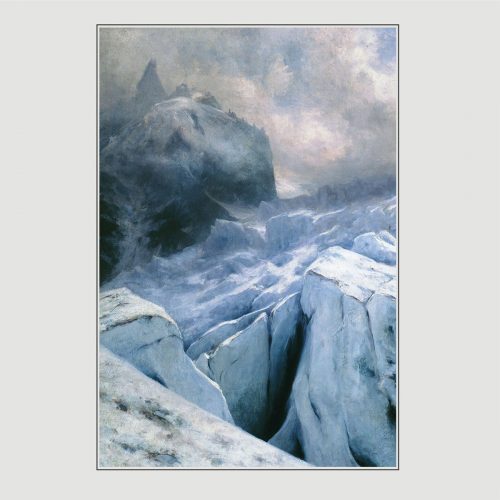 The 2016 debut album of this Québec black metal band, Cendres célestes, really left me stunned. One song from that album, “La Meute“, was so stunning, so prone to make my heart explode every time I heard it, that I included it on my list of 2016’s Most Infectious Extreme Metal Songs.

And so it was with genuine excitement that I learned Eisenwald will be releasing a new 45-minute Cantique Lépreux album on November 30th. Its title, Paysages Polaires, translates to “polar landscapes”, and the music was “inspired by the frost-bitten regions of Québec” and explores “a recurring theme of the icy wilderness which makes up the majority of the band’s homeland”.

The three songs in the middle of the album are a connected, tripartite work based on North American winter, and the concluding part of that piece is the one track you can hear from the album now. And here I am, stunned again.

The implacable hostility of howling blizzards and lethal sub-zero conditions become vividly manifest in the unabashed ferocity of the vocals on this track, but the music absolutely blazes.

There’s a powerhouse rhythm section at work here, creating an explosive physical drive that causes the listener’s pulse to pound just as hard and fast. And the waves of rising and falling melody delivered by the whirring guitars create moods of strong emotional intensity. There’s a panoramic sweep to these sounds, which are dark and desperate, fiery and wondrous.

(Thanks to my friend eiterorm, who messaged me about this track and album even before I received a further slew of e-mails about it.)