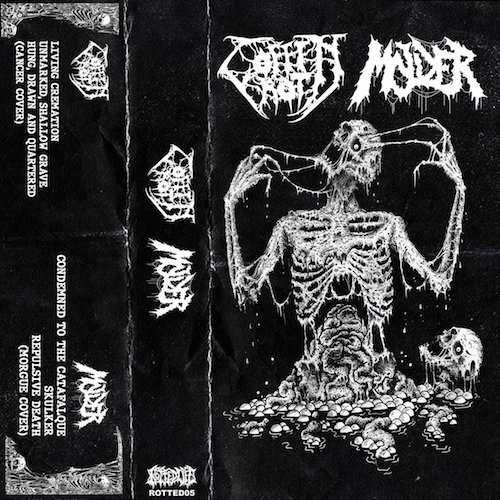 On November 9th the new Maryland-based label Rotted Life Records will release a split by two death metal bands, both of whom are coming off of strong starts and hit it hard on this new joint release. Coffin Rot from Portland, Oregon, are returning after a self-titled demo released by the same label in April of this year, and Chicago-based Molder are following up on their Act of Revenge EP released this past February.

Both bands have recorded three tracks for the split, each of them performing two original songs and a cover. Here, we’re going to feature previously released original songs by each band AND we’re premiering each band’s cover track, with Coffin Rot putting their spin on “Hung, Drawn and Quartered” by Cancer, and Molder tearing through “Repulsive Death” by Morgue. 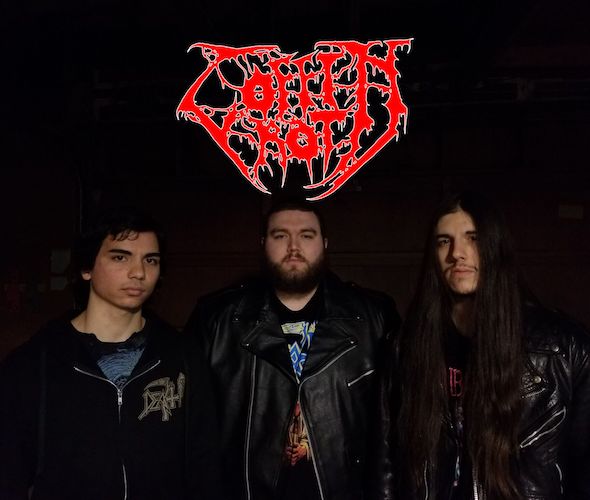 In their hands, the song is a massive, high-speed juggernaut of sound, the music driven by an explosive, neck-cracking drum performance, with blazing, nail-gun riffs alternating with gruesome, groaning chords and bursts of vicious jackhammering. Hayden Johnson‘s vocals are a tyrannical, roaring horror-show, and a spit-fire, fret-melting solo provides the icing on this monstrous cake.

Stream Coffin Rot‘s Cancer cover below, along with one of their two original tracks on the split, “Unmarked, Shallow Grave“. 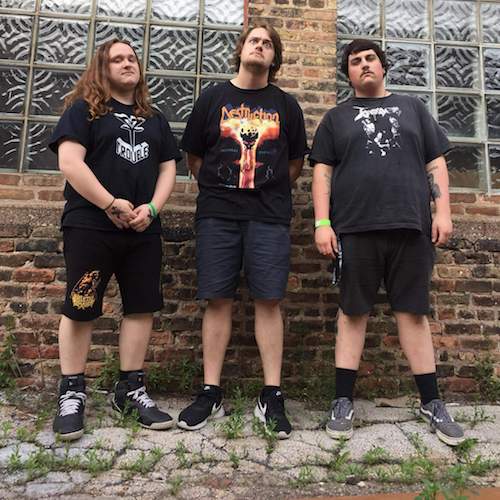 The cover that Molder chose to record for this new split is “Repulsive Death” by the Chicago-area band Morgue from their first (and only) album, 1993’s Eroded Thoughts. Like Coffin Rot, Molder is a trio — consisting of Aaren Pantke (vocals, drums), Ramon Garcia (guitar), and Dominic Vaia (bass).

Molder’s cover has a filthy, putrid, old-school sound — corroded and corrosive. The pace switches between berserker assaults of cruel, deranged riffing over a hammering snare pattern and a heavy bass thrum, and slower, jolting riff-work with a ghoulish, blood-soaked, brutishness in the music’s mood. It’s a mind-mangling attack, made even more unnerving by Pantke’s lunatic shrieks and barks.

Stream “Repulsive Death” below, along with one of the two original Molder songs on the new split, “Condemned To the Catafalque“.

The gruesome cover art for the Coffin Rot / Molder split was created by Sven Grasses, with layout and illustration by Sarcofagore. It will be released by Rotted Life on November 9th, digitally and in a limited edition of 150 cassette tapes. A vinyl edition will be released on November 24th, limited to 250 copies (100 on splattered vinyl). There are plans for a CD edition as well.