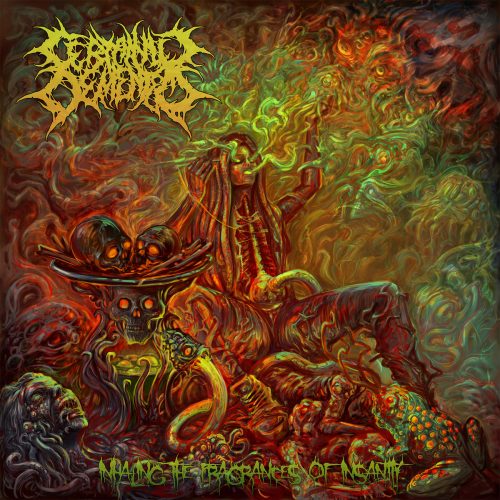 (Vonlughlio prepared this review of the new album by Certainly Demented, which will be released on November 15th by the Russian label Lord of the Sick Recordings.)

For me this year in Brutal Death Metal has been another good one. I’ve found new bands, and more familiar ones have released new material that’s been better that their previous efforts. In my last appearance at NCS my small write-up was for a band called Insidious Squelching Penetration that I recently discovered and just fell in love with at first listen, and I mention that because I’m now turning to another band that came out of nowhere to take over my soul.

The band is Certainly Demented (and they certainly are), with their debut album Inhaling The Fragances of Insanity, to be released via Lord of the Sick Recordings this November 15th.

This band rose from the ashes of the responsible musicians who gave us the classic debut album of Perverse Dependence, Gruesome Forms of Distorted Libido, which was released in 2009. The bassist, guitarist, and drummer from that release are responsible for this new project and they have a new vocalist.

I found out about this new project through my constant efforts on FB to get Perverse back again. One day I get a message from Thy Lord saying: “Something is in the works, new and caveman style of BDM”, and thereafter there was light:

The song “Primal Rage” was released, and it obliterated me with that raw sound that I love in BDM, structured with a straightforward approach and with vocals that do sound as if a caveman decided to take the mic. So it’s not difficult to imagine that when I was given the opportunity to listen to the entire album, I could not pass the chance.

I can safely say this debut album is one of the best I’ve heard in 2018 and has been a constant presence in my playlist. As mentioned, the approach is straightforward, and the very guttural vocals successfully transmit the rage to the listener, which is the icing on the cake.

The songs are to-the-point, ranging from 1:50 to 3:00, with riffs that strike like sharpened knives cutting deep, keeping you wanting more and more. I should mention that there are some intros in a couple of the songs, and those are on point. For me, a long intro can kill the song before it even starts, but that’s not the case here.

The bass is audible and is responsible for special moments in some parts of the songs, and those moments are placed perfectly, adding more depth. The drums are handled expertly, and like the vocals, they fit very well together with the other instruments to make this a savage debut.

I really love this album (it will certainly be on my year-end BDM list), and want this project to continue for many years to come.

So, dear reader, if you haven’t given BDM a chance, please do so — and why not start here?? Below are links where you can pre-order if you like:

2 Responses to “CERTAINLY DEMENTED: “INHALING THE FRAGRANCES OF INSANITY””