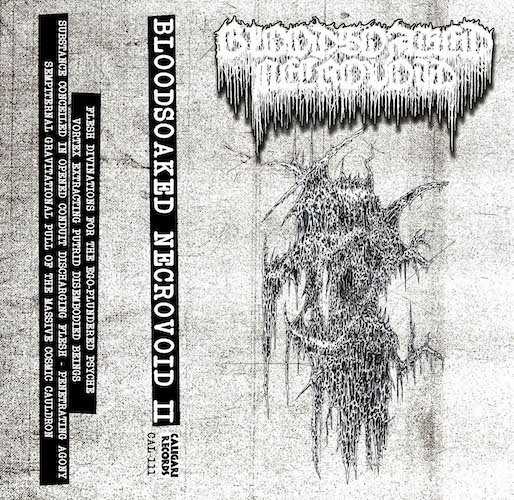 Even if Bloodsoaked Necrovoid had never recorded the kind of horrifying, necrotic death-doom that’s capable of turning your mind into a foul and rotting mess, they would still deserve an award for nightmarishly evocative creativity based on their song titles alone. Here are the names of the four tracks on their debut demo, which was released in July of this year:

Not to be outdone, they’ve concocted four more deliciously arcane titles for their second demo, which we’re premiering today in advance of its November 23 release by Caligari Records: 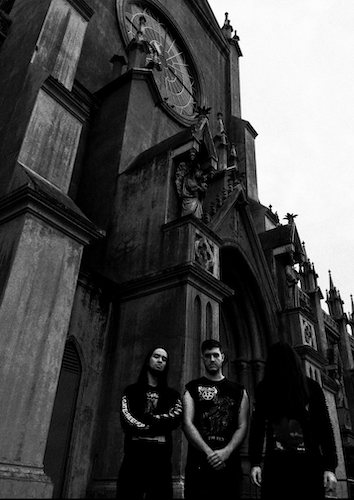 To be clear, this Costa Rican band are more than creative wordsmiths with a fondness for wordy titles. As you’ll soon discover through this stream of their second demo, they’re equally adept at creating music of suffocating oppressiveness and blood-freezing terror.

A foul, toxic aroma emanates from the choking, miasma-like distortion of the riffs, which surrounds the senses like a thick, poisonous fog. With a huge low-end undercurrent that seems to suck the listener’s mind ever deeper into a bottomless cesspool, and ghastly roaring and gurgling vocals that seem to radiate from cavernous depths, the songs are the sounds of immense, lightless horrors. And the high, freakish leads manifest as the wailing of inhuman, unearthly entities for whom sanity is to be scorned.

The demo morbidly groans and crushes, leaps forward in displays of bounding mayhem, grinds like a circle-saw cutting through stacks of skeletons, and in all of its changing rhythms never abandons its devotion to the creation of audio nightmare — even when the music becomes quieter and more cosmic in the midst of the dynamic final track. The songs are primitive, atavistic, soul-shivering summonings of our deep fears of degradation, pain, madness, and the eminence and immensity of death.

And so, lock away your sanity in a safe place where you can find it later, and then proceed to enter the catacombs where Bloodsoaked Necrovoid dwell.

One Response to “AN NCS PREMIERE: BLOODSOAKED NECROVOID — “DEMO II””