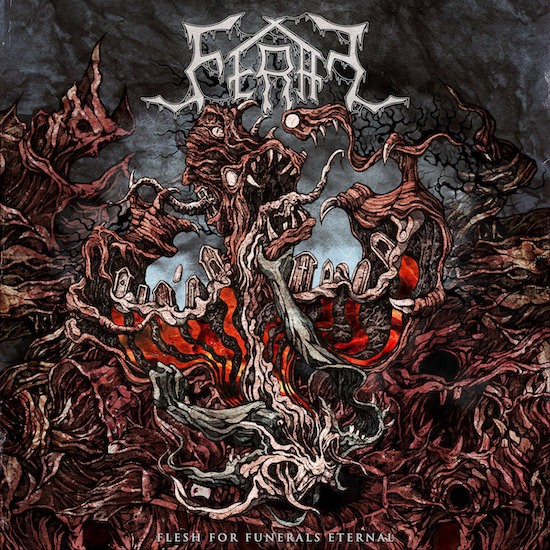 Once again, like Pavlov’s dog at the sound of the bell, I’ve started slobbering to the massive mauling tones of HM-2-powered Swedish death metal done right. And you can look long and hard among the current purveyors of such old-school slaughtering and find damned few who do it as well as Feral.

These Swedish veterans have already made a deep mark (choked with congealing blood) within the lineage of this undying style of metallic extremity with their first two albums, Dragged To the Altar (2011) and Where Dead Dreams Dwell (2015), as well as a handful of shorter releases, and their third album — Flesh For Funerals Eternal (which again features the instantly memorable eye-gouging cover art of Costin Chioreanu) — shows early signs of at least equalling, if not surmounting, the horrid excellence of their previous work.

The first sign was a track named “Horrendous Sight” that debuted on the first day of this month, and today we have a further sign as we premiere “Black Coven Secrets“. 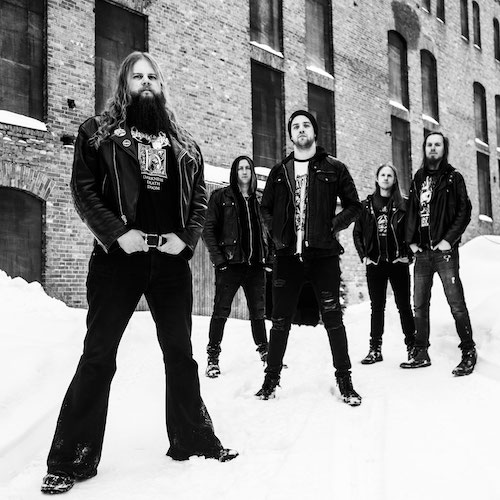 I’ve written before that there are severe limits on what a band can do to change the fundamentals of classic Swedish death metal without sacrificing their place in the lineage. Change it too much, and the music can no longer march (or rampage) under that banner. But this hardly means that bands who embrace the sound are interchangeable. Some are clearly much better than others, and Feral are clearly among those in the vanguard.

“Black Coven Secrets” is a high-intensity, heavyweight ravager from start to finish. Launched by the immense tones of grinding riffage and the electric clatter of the drums (followed by a bevy of start-stop bursts), the song becomes a bounding binge of head-moving, head-wrecking destruction that repeatedly mounts toward devastating screcendos. And through the titanic riffs and clobbering drumwork, seething, swarming leads and freakish soloing burst forth like paranormal fire elementals that slither, spiral, and soar.

The song’s barbaric energy is magnified by the rapid-fire vocals — a changing array of barking, roaring, howling, and shrieking that will get your blood up (and if you’ve had enough to drink, you might also feel compelled to try screaming along when David Nilsson starts exclaiming the words that make up the song’s title).

Flesh For Funerals Eternal will be released by Transcending Obscurity Records on December 30th — just in time to choke the final breaths from this waning year —  in a variety of delicious-looking physical formats, including an autographed LP box set with alternate artwork, and you can explore all of those through the pre-order link below. And of course, it’s also available as a digital download.

Enjoy “Black Coven Secrets”, as well as “Horrendous SIght”, a stream of which we’ve also included for your deviant pleasure.