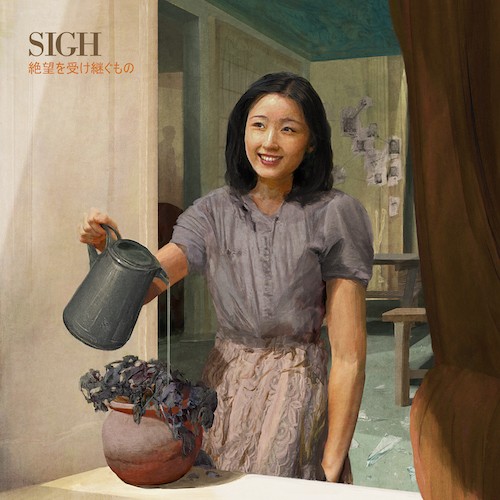 (On November 16th Candlelight/Spinefarm will release the new (11th) album by the Japanese band Sigh, an album about madness and the blurring line between sanity and insanity, with 90% of the lyrics in Japanese and cover art by Eliran Kantor. What follows are Wil Cifer‘s thoughts about it.)

The term progressive metal can bring to mind some cringe-worthy images, among them Berklee dropouts making long sprawling songs with obtuse riffs written with one thing in mind — “How will this sound if I solo over it?“ What sets Sigh apart from such bands, aside from their black metal past, is that their sound actually progresses. It is not stagnant wanking. You know only to expect organized chaos when you go into one of their albums. So I should have not been surprised by the opening track of Heir To Despair (“Aletheia”) sounding like a space-age take on Jethro Tull as a metal band; it makes perfect sense. 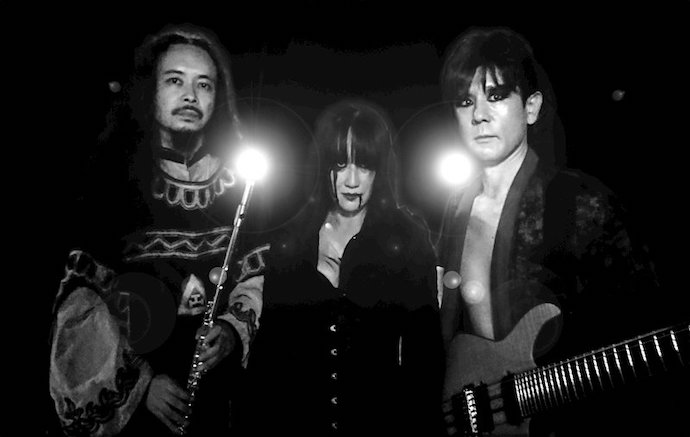 Yes, I remember they used to be a black metal band. The second song (“Homo Homini Lupus”) is more spastic than the first. I would say it’s a heavier album than the previous one, but I will also say it’s a more aggressive one. This is displayed on “Hunters Not Horned”, which is possessed by a touch of rock ‘n’ roll in the recklessness, which is something you don’t hear from the bulk of prog bands that are fixated on sterile precision.

“In Memories Delusional” is a faster and tightly coiled thrashing, before we enter the weird world of the “Heresy” trilogy. From the first installment to the last one they go from something in a Mr. Bungle vein to heavy Slayer-like groove and wind up somewhere closer to The Moody Blues’ zip code with the atmospheric drug hovering. They return to the feral metal thrashing on “Hands of the String Puller”. It throws weirdness at you, but shows that Sigh know what they are doing when it comes to writing a fucking song. Everything seems like the next logical step rather than just being jarring for the sake of being jarring.

The album ends with the title track which is not black metal but chugs in that direction. The guitar playing on this album continues to be stellar. If you are into guitar solos, you should be drooling over the fact that these guys can shred. They do so in a way that holds true to the gods of classic rock, and not as a collection of notes played in as dizzying a fashion as they can. This is all done in the context of the songs they are serving.

Vocally, the title track is not as interesting as some of the previous songs. At over ten minutes it is album’s longest track, so it takes some twists and turns. The most interesting movement is the elegance of the sweeping strum that arrives after we navigate around a great deal of circus music. 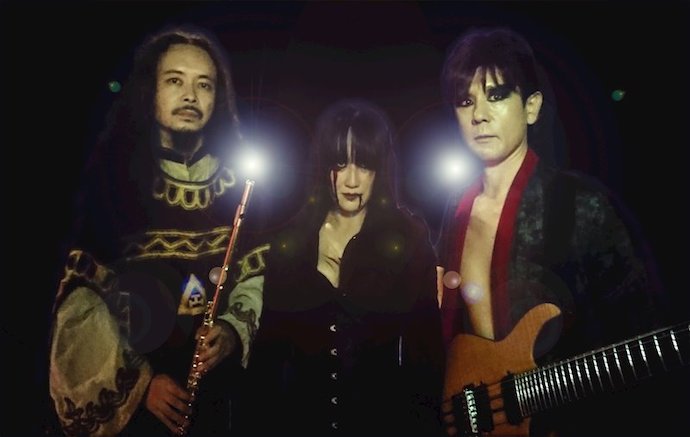 Fans of this band will be pleased again that these guys are going to give them what they want without becoming redundant and putting out the same album twice. Even if you are not a fan, you can’t deny that they excel at what they do. Yes, Phil Anselmo does some guest vocal spots on this album, but even if you are a die-hard Pantera fan you should know that they are well-blended into what the band are doing, and it never feels like they are just putting a spotlight on him in order to be fucking hostile. So if you have come for the Phil, stay for the mind-blowing music that your glue-addled mind might not be ready for.

5 Responses to “SIGH: “HEIR TO DESPAIR””