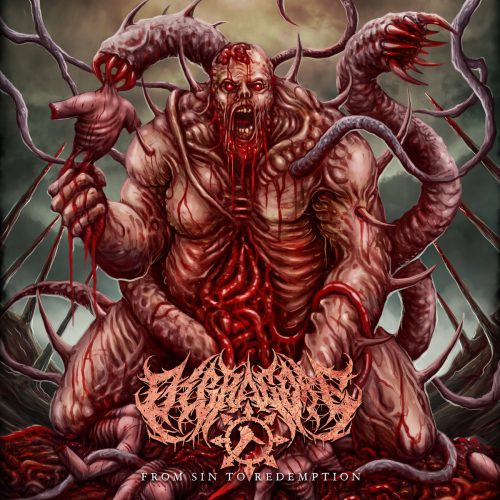 When I saw the name of the song we’re presenting here, my mind flashed to the horrifying scene in the movie Hannibal where the mutilated Mason Verger is dumped into a pen of wild boars who proceed to eat him alive. And speaking of horrors, how about that cover art? And of course there’s the band’s name — Degragore — which perhaps was conceived as a union of degradation and gore.

Naturally, I did not expect the music would be nuanced, graceful, or uplifting — and it definitely is none of those things. Instead, as is abundantly evident from “Eaten By Pigs“, this Hungarian duo have dedicated themselves to a particularly grotesque and remorselessly brutalizing form of un-gilded anti-Christian death metal. 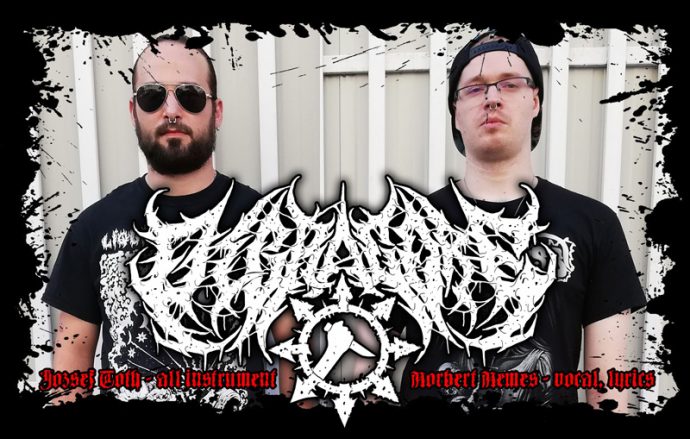 “Eaten By Pigs” is an extract from Degragore’s first major album, From Sin To Redemption, which will be jointly released by Satanath Records (Russia), Metal Ör Die Records (Hungary), and Rebirth The Metal Productions (Germany), with official distribution also through the Argentinian label Grinder Cirujano Records. It is the murderous work of instrumentalist József Tóth (Liquid Cemetery, Abehrum, Dipylidium Caninum, Nekrofília) and vocalist Norbert Nemes (Paediatrician).

No, there is no finesse in this music, simply blood-freezing malignance and unvarnished destruction. The gruesome sounds of porcine screaming provide the introduction, followed by the shock of a storm suddenly breaking — an immense torrent of crashing distortion, hammering drums, and disgusting guttural gurgling. That overwhelming onslaught is segmented by slamming, pile-driving blows hard enough to split concrete, accented by small bursts of hyper-speed percussion. It’s over almost before you know it. It does sort of feel like being eaten by a pack of wild pigs, while being beaten with iron pipes.

The cover art, by the way, was created by Sidjimbe Art Studio. The album will be released in a jewel-case CD edition with an 8-page booklet. And we have a stream of the previously released track, “Church of Blasphemy”, which is free to download at Bandcamp, along with our own premiere.

Don’t say we didn’t warn you.

2 Responses to “AN NCS PREMIERE: DEGRAGORE — “EATEN BY PIGS””