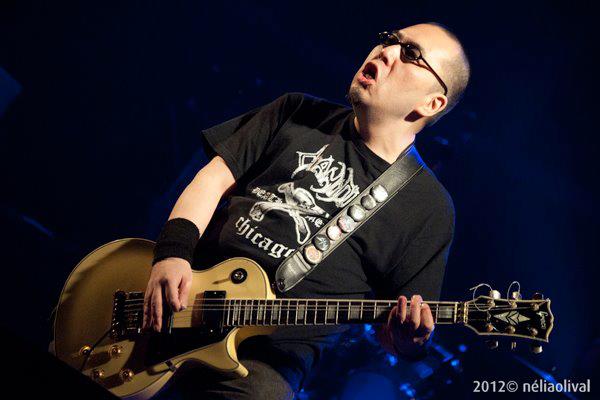 (Comrade Aleks has brought us this revealing interview of Bungo Uchino of the Japanese death/doom band Coffins, who are now at work on an eagerly anticipated new album.)

Formed in 1996, this extreme death doom outfit from Japan has constantly spread violence and a blasphemous rumble under the command of Bungo Uchino, who’s now the only original member. Twenty-two years of violence and gore did not pass unnoticed, and Coffins continue to produce their wicked stuff. Though their latest full-length The Fleshland was released in 2013, since then the band have taken part in six split-albums and two EPs.

We’ve done an interview with Bungo, who knows no rest, and he has clarified the current situation around the band. 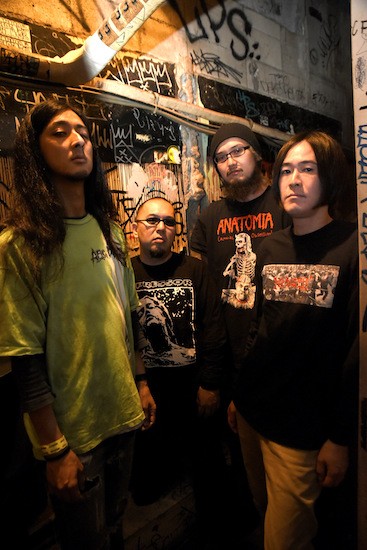 Hi Bungo! So Coffins was formed in 1996, but the band didn’t release anything for the first few years. What was going on ’til 2000 when the band recorded its first demo?

We were in a dark and long tunnel. At that time, our musicality was fluent. Coffins was playing sounds like Swans and Godflesh, etc., in the former band era, so the early sound was an alternative/noise-rock type. And in the middle, it was a Doom/Sludge sound influenced by Cathedral, Eyehategod, and many others. I mean, the band’s sound was not solid, so we did not make a demo. When restarting in 2002, old members left the band. So I decided to play the Doom/Death sounds I wanted to do before.

What finally formed your vision of Coffins, music-wise? What mix of influences led you to this brutal mix of death and doom metal?

Originally Winter was a model of the Coffins that restarted. It has been largely influenced by Doom/Death bands such as Winter, Autopsy, and Divine Eve, etc. And, basically, I’m writing most of Coffins‘ songs. I love the Sludgecore sound such as Eyehategod and Buzzoven, etc. When Coffins stopped for a while, I was playing in a sludgecore band as well. So perhaps the influence may appear in my songs. 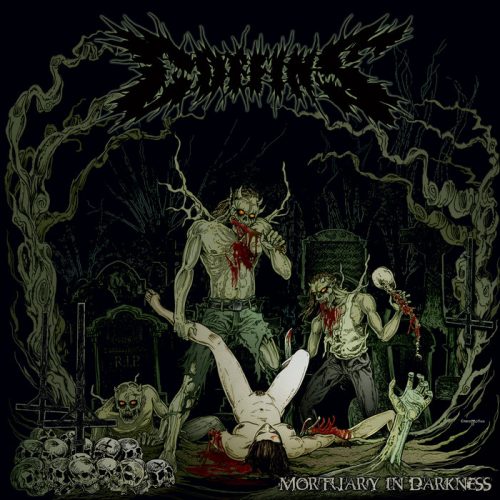 Mortuary In Darkness was recorded at Noise Room Studio in 2005. What are your memories of this session? How did you organize everything there?

Hmm…it was so long ago, I don’t really remember haha. But the studio had just started business, so there was not much good equipment. I remember the recording work was so fucking hard.

The album was re-issued a few times, and still it is a kind of demanded release, which probably gained Coffins its reputation. Why do you think this stuff is so appealing to people? And how do you see the role of the band’s bloody image in forming its popularity amongst the underground scene?

I’m not sure…certainly our past three albums have reissued. But, since we have not been given too much profit, we cannot figure out whether our materials are popular among people. At least I think that I want to move for my band at my own pace so as not to be affected by surrounding circumstances. 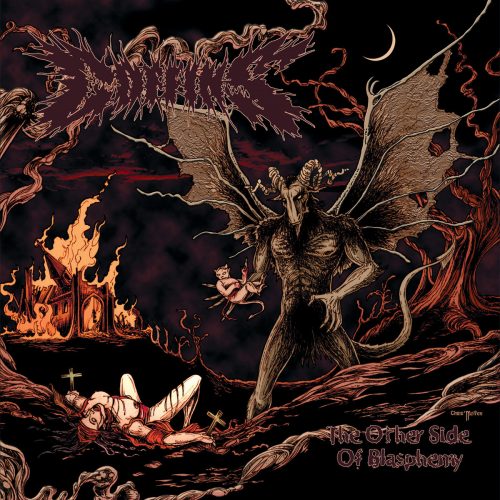 Your next album, The Other Side Of Blasphemy, was recorded pretty fast; did you already have its entire image in your mind when you entered the studio?

That album was on the extension match of Mortuary In Darkness. So I had a stock of songs, and my enthusiasm for creation was very high. Personally it is my favorite album.

Coffins’ Buried Death was released by 20 Buck Spin in June 2008, when the band already was well-known abroad. Did a switch to a new label help you with promotion in the US? After all these years in Coffins, can you tell whether promotion is something that depends on bands or labels?

20 Buck Spin was a good label for us. The label of the second album was very small, so the promotion and distribution were not enough. 20 Buck Spin released the US license for the second album, and after that we signed a contract with them for the third album. This trend became a cornerstone to our contract with Relapse later for us, so I think that it brought big benefits. We are a Japanese band. Because we cannot play shows often, it is difficult to become famous overseas. Even if this weren’t the case, I think that it is the best way for us, that people are able to pick up the sounds that overseas labels have distributed.

Did you have any difficulties during the recording of Buried Death? And did you try some new equipment in the studio to improve your sound? Do you prefer to use new stuff during recordings or do you already have all the equipment you need to crush people’s skulls with your grinding death doom metal mayhem?

I also don’t remember it very well, sorry. But I only remember that we had little time for recording for that album. One thing I can say for sure is that the recording studio system improved better than before, and the recording engineer improved his recording skill.

There are ten split albums between Buried Death and The Fleshland. Was that a part of your plan? Is it more fun for you to take part in splits than recording bigger albums?

Split releasing work is one of the important communication tools for us. Our band work is not a job, so always we’d like to have fun. Releasing records with our friends and respecting bands is very stimulating for us and improves the motivation for creation for our album work. 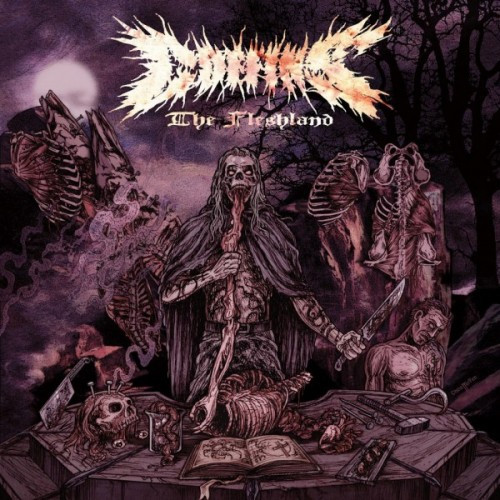 The Fleshland is your first album which the band recorded as a quartet. Did anything change in the studio? How did this recording session go?

At that time, I was thinking of raising the technical strength of the band. First, I felt the limits, at that time, of the drummer’s technical capabilities, so I converted him to a full-time vocalist. I felt the limits to my voice, and he was originally a vocalist of another band, so it was the best timing for us. And we added Satoshi as a successor drummer to the band. His drum skills were very high, very matched to our sounds. More than anything, he understood well the old school metal sounds. In this way, we were reborn as a quartet band, and we decided to record that album.

How did it happen that Ryo Yamada switched from drums to vocals for The Fleshland? Did it really work better?

As he is already a departed member, I have nothing to say about him. His voice was good, but… anyway, I guess he was doing his best to contribute to the band, but his understanding of old school death metal was shallow and he did not fit with us in a human part.

Can you say that in The Fleshland you fulfilled everything you wanted to do as Coffins?

That album is one of the arrival points, and it became one of the starting points. We pushed death metallic expression on that album. The expression in the performance technique part was the best ever. But the original charm of the band may have been the thinnest. We are moving toward a new direction with the theme of “initial impulse” in the next album. Various types of “early death metal” songs will be in the album.

Your songs tell short stories of gore and violence — what’s that all about for you? Do you see it as a sort of entertainment or is it kind of something bigger?

The lyrics I wrote at that time are based on real social problems and world affairs, but it is not political, they are just fantasy stories. I was constantly conscious of the lyrics that matched the atmosphere of the song, but personally…on death metal, I think that lyrics are not important. If a band wants to tell an audience about lyrics properly, it should be a “singing” band, right?

Bungo, how do you work with artists who have done Coffins’ artworks? Do you discuss the artworks’ themes with artists? How do you explain what you want to see there?

About the artwork of the album, we have worked with Chris Moyen. Of course he is a legendary jacket artist for underground extreme music. A couple of years ago, we were able to get the opportunity to offer artwork to him, fortunately. Basically, we always wanted to respect his inspiration. So we only tell him the title of the album and the songs, and he draws freely. Our single compilation albums, EPs, and merch’s are the same way. For the split releases we basically leave it to the artists and the split bands.

How do you see Coffins as a representative of Japanese culture? Do you feel the band has something authentic inside, or is it rather Western-styled stuff?

Underground metal bands (especially Death Metal) are not generally recognized in Japan. I mean, it is not in the category of Japanese culture. On “Metal” music, Japan is a developing country in Asia. So our sound style is rather Western-styled stuff and we are constantly working while watching the overseas scene. 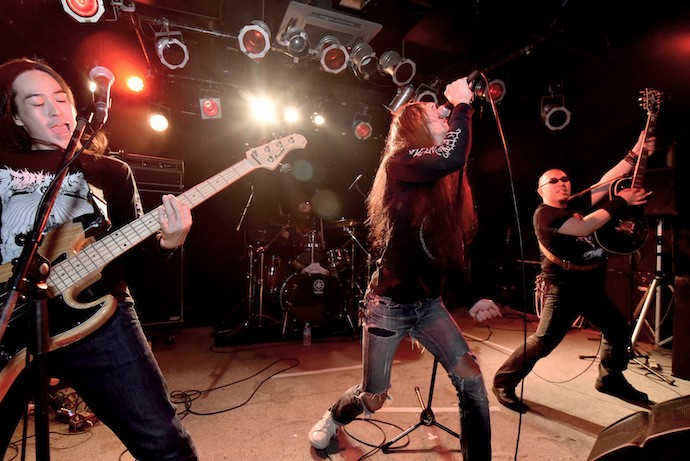 Five years have passed since the release of The Fleshland. What are your plans concerning release of a new album?

Hell yes!! Finally our work for a new album, which had stopped because of a member change problem, has restarted. We are writing songs for the album and will start the recording works soon!!

Who’s in Coffins’ lineup besides you now? What’s the background of new members?

The drummer is Satoshi. He has been playing with Coffins since late 2011. Originally he was playing in a sludgecore band, but I invited him to the band because he wanted to do doom/death metal like Autopsy, etc. The vocalist is Tokita. He has been singing in this band since 2014. Originally, he was singing in a power-violence band. When we shared the stage with his band at that time, he was wearing Dismember’s long-sleeve shirt with a good low voice, so I scouted him with that intuition

The bassist is Atake. He is the newest member and has played in this band since the latter half of 2015. He was a veteran bassist and he was originally playing with several other hardcore bands and a brutal death metal band. When the former bassist decided to leave Coffins, accidentally at another occasion I saw Atake was wearing a Noothgrush shirt. I decided to invite him to Coffins because I thought that he understood about the slow heavy sound.

Do you already have some songs ready for the next release? Are they kept in the same way as previous albums?

We have finished writing most of the songs, and are actually playing some of the songs already at shows.