Rauhnåcht is the solo project of Austrian musician Stefan Traunmüller, who has been a presence in many other projects over many years, including Golden Dawn, A Portrait of Flesh and Blood, and Wallachia. Although he began releasing music under the Rauhnåcht banner as far back as 2010, with two albums, two EPs, and a split with Sturmpercht recorded over the next four years, it was Rauhnåcht‘s wonderful 2017 split with Hanternoz and Tannöd, which we premiered, that first brought the artistry of Rauhnåcht to our attention.

That split, which was released by the underground French label Antiq Records, was an hour-long concept recording about the legends of the Alps. It was not the first nor the last example of the ways in which the natural splendor of the Alpine peaks and valleys, through all their changing seasons, and the old cultures that have evolved in their presence, have inspired the music of Rauhnåcht. The most recent example is a new album named Unterm Gipfelthron, which will be released on December 7th by Debemur Morti Productions.

We’ve already written about the album’s opening track, “Zwischen den Jahren”, which at four-and-a-half minutes is shortest of the album’s fives songs. The two that come last — “Ein Raunen aus vergess’ner Zeit” and “Winter zieht übers Land” — are long compositions, at ten-and-a-half and more than 11 minutes, respectively. To provide alluring glimpses of what they’re capable of doing to your head and heart, DMP has prepared a medley of the music from those two tracks that we’re sharing with you today.

I hope we’ll be forgiven for saying that the medley only hints at the immersive power of the two full tracks. Both of them are such moving and transportive experiences that excerpts alone couldn’t possibly deliver the full effect of the sonic spells they represent. Having said that, the excerpts that have been chosen are effective in portraying some of the key ways in which Rauhnåcht has alloyed different sounds and moods over the course of these tracks (and the album as a whole), and is itself a seductive and inspiring experience.

In genre terms, the familiar aggressiveness of black metal contributes one aspect of the music’s emotional intensity, but only one. As Stefan Traunmüller has himself rightly remarked, the music of Rauhnåcht contains more colors, interweaving folk melodies and instrumental tones, as well as sweeping synths and contrasting vocals. As the medley reveals, these braided textures of sound and emotion seem to manifest the intersection between myth and natural magnificence, in which you feel the presence of ancient, otherworldly forces as well as even more ancient and awe-inspiring crags and forests, both of which dwarf the mundane happenings of daily life and neither of which seem entirely real.

And so you in the opening excerpt you’ll hear an amalgam of beautiful, gleaming ambience and shivering chords, of spine-snapping snare beats and rumbling blasts, of scalding snarls and clean voices that soar as the music rises in majesty. In the second one, a flute-like melody over a bounding, mid-paced rhythm segues into a sound that captures panoramic vistas, which in turn morphs into a furious percussive eruption and intense riffing. Trading places with those hostile snarls, choral voices emerge in tones that seem to combine fieriness and reverence, accented by a beautiful, soulful guitar lead edged with melancholy. 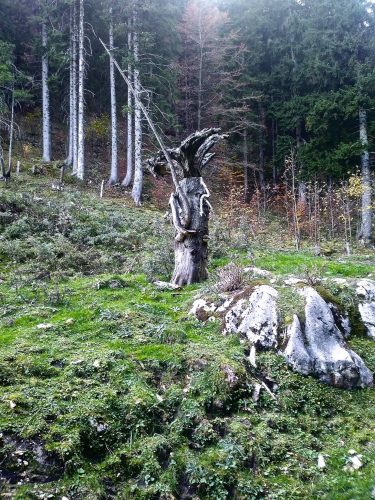 If you’re like me, even these excerpts will make your heart swell to twice its size, and you’ll want to hear more, and of course you’ll have that chance on December 7th. The record is available for pre-order now, on vinyl and CD, an dit’s offered as a digital download, too.

2 Responses to “AN NCS PREMIERE: RAUHNÅCHT — A MEDLEY OF MUSIC FROM “UNTERM GIPFELTHRON””