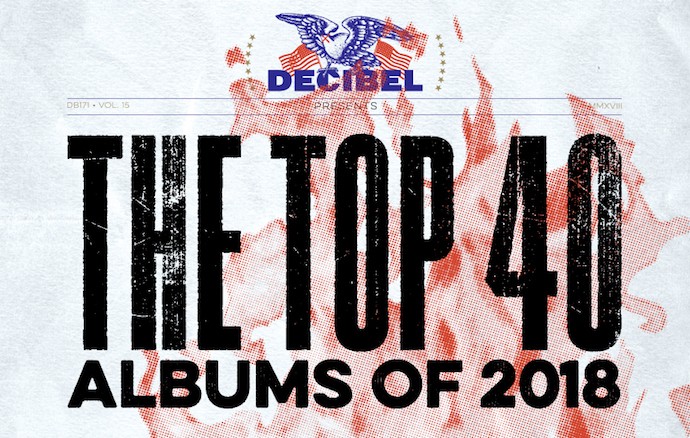 The DECIBEL list will officially appear in the magazine’s January 2019 edition, which hasn’t yet hit my own mailbox, but because it’s out in the world somewhere already, DECIBEL again decided (for the third year in a row) to scoop their own list rather than letting leeches like me leak it. They published the list on-line yesterday, and so I can now again re-publish their list without too much guilt.

Of course, there will be a lot more content in the January issue (which has Deafheaven on the cover), including commentary about each of these 40 albums and why they were selected. You can order a copy of that HERE. 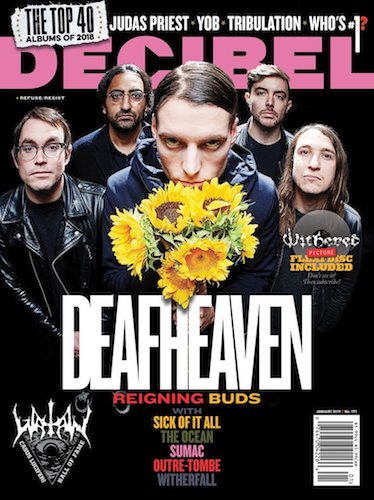 Such lists continue to serve several useful purposes. One, of course, is to introduce fans to albums they may have overlooked. I also know people who don’t buy much music during the year and actually wait to read year-end rankings before preparing their shopping lists. And, perhaps most obviously, they give us something to discuss and argue about. Because, duh, we don’t have enough to argue about already, even in the age of Trump.

I usually try to hold my own comments to a minimum when I post these year-end lists from print publications and “big platform” sites, mainly because I can’t manage to make a list of my own. But here are a few random observations about this one, just to get the conversation started — but I do hope you’ll continue the discussion in the Comments to this post.

First, only one of these albums (from Cosmic Church) was self-released; all others were backed by labels, although a few of them are quite small and obscure. Make of that what you will. Among the 39 label releases, no one label was dominant, with Century Media, Relapse, Season of Mist, and 20 Buck Spin all having three releases on the list, and five more with two entries each.

Second, I can’t help but feel a surge of regional pride in seeing two bands from the Pacific Northwest — YOB and Uada — in the Top 3, with YOB nailing down album of the year (and it’s extra-nice to seeing that recognition going to one of the most decent human beings in metal, as well as one of the most talented — Mike Scheidt).

Third, as the person responsible for our weekly SHADES OF BLACK column, and therefore someone who spends a lot of each week listening to new black metal, I notice once again that there isn’t much obscure (or even not-so-obscure) black metal on the list, but of course I’m neither surprised nor complaining. I am happy enough to find Panopticon, Devouring Star, Funeral Mist, Varathron, Immortal, and the afore-mentioned Uada on the list, all of whom released very deserving albums this year.

Fourth, while there are of course a lot of releases on the list that have been widely noticed over the course of the year, many of them from the bigger names in the field, DECIBEL has again done a decent job of mixing up the genres without pandering to mass tastes in mediocrity, and have (as usual) thrown in some more obscure entries. And although their Top 10 of course wouldn’t match my own, it’s pretty solid — not one entry that would cause me to tear at my hair and yell “What are THEY doing there?!?”

And with that I’ll shut up and let you guys continue the conversation in the Comments. I’m quite sure you have opinions.