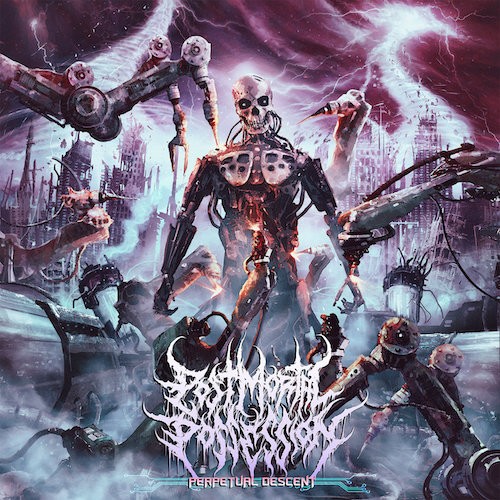 (This is Vonlughlio’s review of the new album by Pittsburgh-based Post Mortal Possession, which was released on November 17th by Lord of the Sick.)

This time around I was given the opportunity to do a small write-up for Post Mortal Possession‘s debut album Perpetual Descent, which was just released by Lord of the Sick Recording. This band is from Pittsburgh, Pennsylvania, and was formed back in 2013. Prior to this debut full-length, they released two EPs,  Possessing Entity back in 2014 and Forest of the Damned in 2016.

I became aware of the band’s existence when The Chicago Domination Fest 2017 lineup was announced and their name was among the ones to be found there. So, I decided to check their EPs and thought they were good — there was talent for sure — but (at least for me) nothing special.

Moving forward, Lord of the Sick announced that they signed this project, and my first thought was, “Really? They don’t seem to fit in the roster”. Nevertheless, I decided to listen to Perpetual Descent with an open mind, to see what this group of musicians had to offer now. Also, some friends of mine who attended CDF mentioned them as one of the strongest performances.

I must say that this album turns out to be a perfect blend of death and tech with BDM elements, and it is done with good taste. I was surprised and pleased with how this turned out. It displays great musicianship from start to finish.

The guitar work here is outstanding, with riffs that keep you engaged and soloing that comes at just the right  moments. The bass is very audible and gives more depth to the overall sound, while the drums are handled with precision and give that extra technical touch in how they change.  A production that is natural and embraces all the instruments as if they were in a room together adds more strength to the overall sound.

I should add that the band don’t overwhelm the listener with tech wankery (which for me is a plus) but instead combine the technical elements perfectly with the other genre influences. In addition, the vocals became one of my favorite aspects of the music. They are diverse, and the patterns in each of the songs allow the vocalist to use high and lows in a timely and effective manner.

Overall, this is a strong effort that showcases how much Post Mortal Possession have grown as a band, and I look forward to seeing what they do next.

You can listen and support the band here if you enjoy the music:

Lord of the Sick FB:
https://www.facebook.com/LordOfTheSickRecordings/