(In this feature TheMadIsraeli reviews the new self-titled album by the California death metal band Oblivion and introduces our premiere of a track from the album named “Insurrection“.)

I honestly believe Oblivion are one of the most consistent newer death metal bands we’ve got right now, with a unique voice of their own. Whether it’s down to Nick Vasallo’s distinctive old school high/low vocal approach, the same granite yet antimatter guitar tone they’ve had since their debut EP, or the flagrant combination of ’90s tech death and modern progressive tendencies, there’s always been a lot to like on all fronts about Oblivion.

I was a huge fan of the band’s last record The Path Towards and it’s move in a more proggy direction with some very welcome black-metal-intensive moments, and songs that really shook things up and showed the band expanding their horizons delightfully. I was surprised, as a result, on my first hearing of Oblivion’s upcoming self-titled record, that the band had decided to take a direct, distinct step backward to the more grounded death metal sound they came crashing through the gates with on Called To Rise. 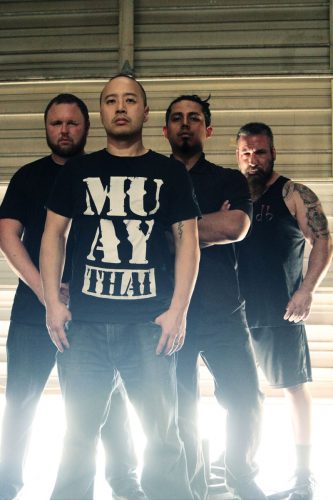 I initially was taken aback since I quite liked the direction The Path Towards was taking, but this self-titled album isn’t just a return to their roots, it’s an expansion on their older sound. It doesn’t quite fall in line with The Path Towards, although some songs, such as “Threshold”, pay tribute to it on a spiritual level. The album is mostly bolstered though, in the end, by beefy, riff-driven technical death metal with a lot of hooks, exactly what the band was built on from day one.

What elevates this step backward is the maturity in the song-writing and the fact that Oblivion don’t cater to conventional song-writing structure. Songs like the Vader-esque opener “True Awakening” with its almost two-minute intro of drama, riffs, and devastation, or the bludgeoning “Forgotten Brotherhood” have enough peaks and valleys in them (amongst the instrumental acrobatics) that the apocalyptic nature this band has always gone for feels more realized here than ever. While Called To Rise felt like one killer riff and brutal groove after another for adrenaline’s sake, the music on this self-titled definitely feels like a collection of short stories by comparison, and they are masterfully written.

As compelling as all the music is on this record, I have to say that I still definitely find myself personally liking the few blackened tracks on this record, which are back-loaded but appreciated in their grouping. In my estimation “Threshold”, “Expand The Hive”, and “Negative Mass” are the best songs on the album, but this doesn’t make brutalitarian military drills like “Fear What Is Unknown” and the song we’re premiering today, “Insurrection”, inferior. Those songs are also an example of Oblivion in a fine state of their craft.

This band continues to be on the top, and I’m always left feeling these guys don’t get the recognition they SHOULD get. Maybe one of these days they will. Enjoy our premiere, and the rest of the singles that have been released so far, which we’re also including below.

Oblivion will be released on January 21st, and can be pre-ordered via the link below.

One Response to “AN NCS PREMIERE (AND ALBUM REVIEW): OBLIVION — “INSURRECTION””