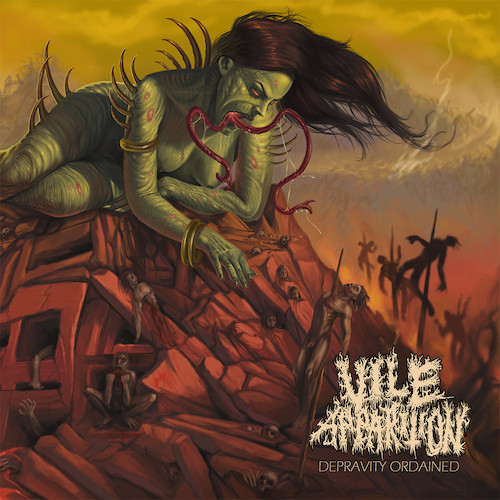 Depravity Ordained is the name of the debut album by Vile Apparition from Melbourne, Australia, which will be released by Memento Mori on January 21st — and the music is indeed depraved, delivering an especially brutish and electrifying form of old-school death metal malignancy.

But before we get to the music — a new excerpt of which we’re presenting today — how about that metal AF cover art?!? Immediately attention-grabbing, it’s also the kind of macabre rendering that stays with you, and will likely lure listeners into this music just as effectively as any words might do. Kudos to Chaostouched for this glorious creation! And now, on to the music… 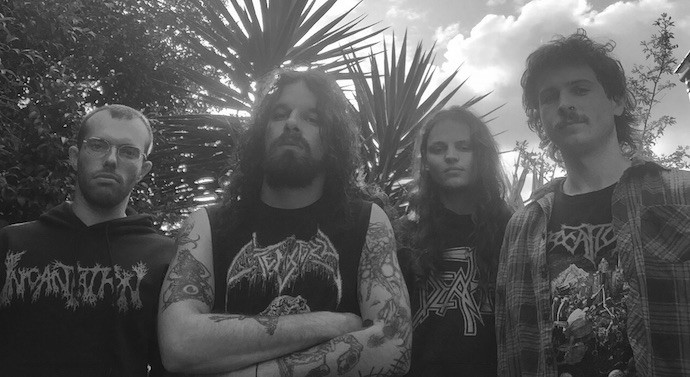 The track we’re bringing you at the end of all these words has a name that might just as easily have been the title for the artwork (or perhaps a description of your own reaction to it): “Repulsive Desire“.

There is so much to like about this song if you’re a fan of strains of death metal that were spawned by the likes of Morpheus Descends, Ripping Corpse, and Deteriorot, as well as the early works of Suffocation, Deeds of Flesh, and Cryptopsy (all of whom are called out in the press sheets for the album, and with justification). It combines an incredibly vibrant, skull-busting drum performance; down-tuned, near-atonal guitar vibrations; cavernous guttural roaring; and a traumatic attack that’s both primitive and dynamic, thuggish and technically adept.

The song moves from a rumbling and battering drum fusillade that undergirds a jagged, jabbing, and braying riff into a snare-accented percussive assault with a bounding rhythm and roiling, slashing guitar work. In yet a further shifting of gears, the music develops a destabilizing kind of lurching and crazed momentum, and yet another shift brings a more delirious sensation in the sound of vicious jolting and scything guitars, punctured by bursts of rapid-fire drum mauling — and these displays of barbarous (and highly mosh-worthy) hostility are capped by a writhing and roiling guitar solo that will singe your eyebrows.

It really is an exciting piece of nastiness, both cold-blooded and hot-blooded in its murderous, bone-fracturing ambitions. And there’s a whole lot more top-shelf nastiness where this came from, as you’ll discover if you listen to the two previously released tracks, “Depravity Ordained” and “Malevolent Aphantasia“, which we’re including below along with our own premiere.

Memento Mori will release the album on CD, and at a later date Blood Harvest plans to discharge the music on vinyl and cassette tape. For further info about how to acquire the record as it becomes available, keep your eyes on these locations: