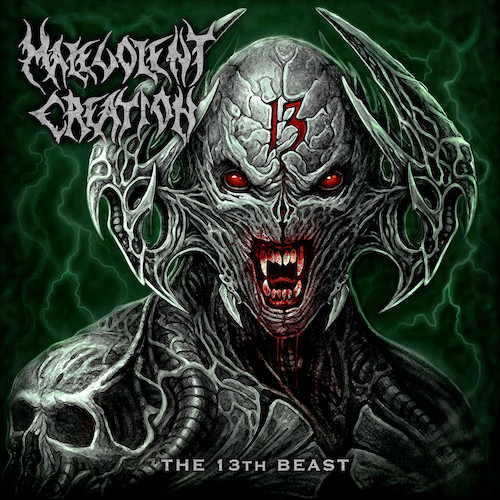 The opportunity to premiere a video for a new song by Malevolent Creation from their 13th album (fittingly named The 13th Beast) seems like the kind of halcyon time that should inspire a dense retrospective, a positioning of the music in the context of more than 30 years of heavy metal creativity by this band. Unfortunately, for me, the task is too daunting. Even attempting to provide an adequate musical biography by way of introduction is a bewildering challenge. So I’m just going to pretend that you don’t know much about this group beyond the song you’re about to hear.

And, having reflected on this approach, I don’t think it’s unfair. We can pay honor to the decades-long achievements of a band such as this one, but if we’re truly honest with ourselves, past glories do not make new music any better than it would be if the band’s name were blacked out. Nostalgia, and respect borne of a group’s ground-breaking contributions, really should not influence how we hear a new song or album. If we are not sheep, then every new honor we might bestow must be earned. 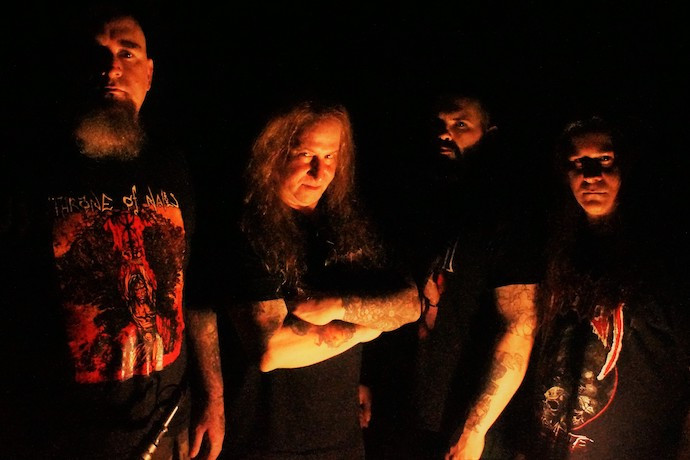 Well, holy hell, do Malevolent Creation re-earn their honor with “Release the Soul” (and for that matter, with the entirety of The 13th Beast). The music is a display of veteran skill and assurance, which should be expected, but it’s more than that. It sounds like a band near the pinnacle of their powers, something more than we have any right to expect after three decades.

Perhaps this is due in part to the fact that founding guitarist Phil Fasciana has surrounded himself on the album with new members (who are still metal veterans): vocalist/guitarist Lee Wollenschlager (Throne of Nails, Imperial Empire), bassist Josh Gibbs (Thrash Or Die, Solstice), and drummer Phil Cancilla (Bits of Gore, Primitive Brutality, Misericordiam).

“Release the Soul” is a fine sign of what they’ve accomplished together. The morbid and moaning guitar harmony that opens the song immediately creates an atmosphere of preternatural ghastliness and calamitous doom, oozing slowly forward over a granite-heavy bass line and the methodical mortar fire and gun-shot cracks of the drums. The intensity of the song increases as Wollenschlaeger begins to vent the lyrics in livid, jagged-edged growls and the double-bass drums kick in. And then all hell breaks loose.

What arrives at the 1:17 mark is a blitzkrieg of sound, a death metal shock-and-awe campaign of dark, drilling riffs and leaping leads that transmit the delirium of a bestial feeding frenzy, driven to heights of rampant savagery by the maniacal militarism of the rhythm section. It gets the blood rushing, that’s for damned sure, and those riffs quickly become insidiously addictive (trying to yell the lyrics along with Wollenschlaeger is also an irresistible impulse). When that morbid refrain from the opening returns, it somehow sounds tyrannical as well as oppressively dismal.

Lee Wollenschlaeger tells us: “The song is about a murder victim’s last moments and thoughts, and the pleasure of the kill for the murderer. A classic revenge kill with high expectations for the murderer.” When you listen to the song again, it sounds just like the tale behind it.

The video directed by Guilherme Henriques is a great match for the music. Filmed in black and white, and shot and edited in a way that conforms to the changing energies of the music, it’s an effective conveyance of the darkness and intensity in the sound, while giving us a relished chance to watch the band performing. Further credit for the video goes to Chris Briggs and Roger Beaujard / Primitive Recordings and to Quintin Supra / Eye Candy Photography House for filming the footage used in the production.

The 13th Beast was mixed and mastered by the great Dan Swanö at Unisound, and it features eye-grabbing cover art by German Latorres. It was released on January 18th by Century Media, and physical editions of the album will be released in the U.S. on March 1st by M-Theory Audio (on CD, vinyl, and cassette only).

For your convenience, below we’ve included not only this new song and video but also streams of two previously released videos for “Mandatory Butchery” and “Decimated“, off the same album.

One Response to “AN NCS VIDEO PREMIERE: MALEVOLENT CREATION — “RELEASE THE SOUL””