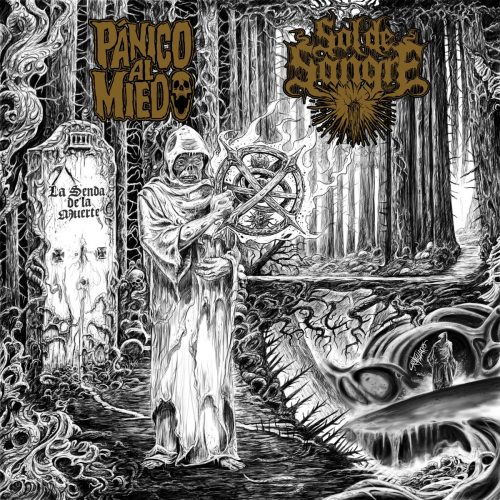 It isn’t uncommon for current bands to honor the giants of the past on whose shoulders they stand, and whose music provided both inspiration to their own creativity and vicious joy to their own listening. But the homage that Pánico Al Miedo (Spain) and Sol De Sangre (Colombia) have paid to their own death metal heroes in a new split is still something very special.

La Senda De La Muerte is the name of this new split. It will be released on CD by Germany’s War Anthem Records on January 25th and in a cassette tape edition by Scotland-based Camo Pants Records on March 1st. It includes Sol De Sangre‘s covers of songs by Entombed and Unleashed, and Pánico Al Miedo‘s covers of songs by Pestilence and Death. And while both of these excellent bands have taken significant steps to link these recordings to the era that gave them birth, they’ve also put their own stamp on the music — perhaps most significantly, they’ve reinterpreted the lyrics in Spanish, giving the songs a new kind of vibe and atmosphere.

As for the steps the bands have taken to show the depth of their respect to the spirit of the source materials, Sol De Sangre‘s tracks were mixed by Tomas Skogsberg (at Stockholm’s Sunlight Studios) and mastered by Dan Swanö (at his Unisound Studios), while Pánico Al Miedo‘s recordings were mixed by Marc Boria (Estudi Labedoble, Terrassa, Catalunya) and mastered by Tony Lindgren (at Stockholm’s Fascination Street Studios) — and the cover art was created by Juanjo Castellano Rosado (Paganizer, Carnation, Revel In Flesh, Sentient Horror, Avulsed), providing his own homage to the cover art of the albums on which the songs in the split were originally released.

Today it is our great pleasure to premiere lyric videos for one of the cover songs recorded by each band for the split — preceded by a few further words of introduction. 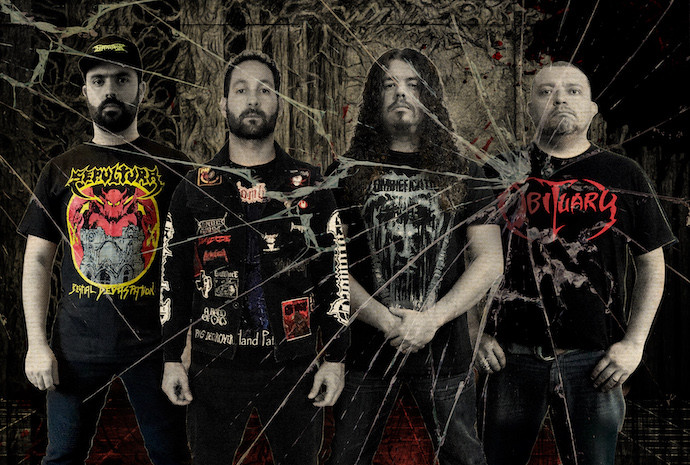 I’ve showered a lot of praise on this veteran group of Colombian musicians over the years, most recently in the context of premiering and reviewing their fantastic self-titled 2018 album. In their original compositions they’ve already convincingly proven their talent for paying homage to a variety of classic death metal sounds, while leaving their own distinctive marks on the strains of past glories, and they do it again here in these cover songs.

Sol De Sangre‘s side of the new split includes their renditions of Entombed’s “Revel In Flesh” (“Festín De Carne“) and Unleashed’s “Before the Creation of Time” (“Antes De La Creación“) — and it’s that Entombed track from Left Hand Path that we’re presenting today.

Of course, you’ll recognize that guitar tone as soon as you hear it, as well as the rollicking, rampaging, ghoulish heart of the music, but the scalding Spanish vocal attack gives the track a new dimension, and the production of the music lends it both enhanced clarity and added power. It’s an insane, destructive, sadistic, and insidiously addictive experience, created by talented performers who are locked in and totally devoted to their mission (there’s a hell of a guitar solo in the song as well).

As in the case of Sol De Sangre, I’ve written a lot about this Spanish band, hosting premieres of multiple songs and videos for their 2018 debut album Formador — which is excellent, and well worth your time if you haven’t encountered it before. They crafted a blood-rushing attack that embraced and integrated the styles of both Floridian death metal and Bay Area thrash, paying homage to fearsome progenitors from the ’80s and ’90s. And on that debut album, in addition to enlisting the cover artist (Ed Repka) who crafted some of the band Death’s most memorable covers, they secured guest guitar solos from two former Death guitarists — James Murphy (also Obituary, Testament) on the track “Formador” and Bobby Koelble on the song “Cebos Vivos” and the bonus track “Formador”.

For their side of the split, Pánico Al Miedo chose to pay tribute to Death’s “Pull The Plug” (“Desconéctame“) and Pestilence’s “Twisted Truth” (“Verdad Vil“), and it’s Death’s track from the Leprosy album that we have for you now.

Pánico Al Miedo truly deliver a savage and supercharged performance, with Spanish-language vocals that are absolutely ferocious and a level of technical acumen and blast-furnace energy in the instrumental performances that will pop your eyes wide open and send jolts of electricity up and down your spine. They beautifully capture the spirit and atmosphere of the song, and make it come alive again in striking fashion.

This really is a hell of a split, one that all die-hard death metal maniacs are going to love. Pre-order via the links below! Credit for the videos goes to David Provan / 12 Inch Media (Obituary, Deep Purple, Venom, Decapitated…).