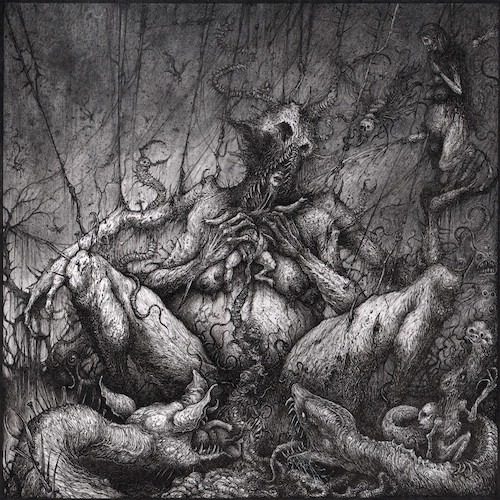 Prepare to have your mind blown, because the song we’re about to present really is the kind of extravagantly explosive experience that will leave the most hardened listener pop-eyed, slack-jawed, and wondering “what the hell did I just hear?!?”

“Prayeggrh” is the name of this song, and it’s one of five (plus a bonus cover of an Arkhon Infaustus track) included on Outpregnate, a new MCD by the Swiss black/death metal band Eggs of Gomorrh, which is set for a March 22 release by the extremist French label Krucyator Productions. The outrageous cover artwork by Daniel “Nekronikon” Corcuera is enough to leave most people pop-eyed and slack-jawed, but it still might not be sufficient warning of the sounds that lie within. 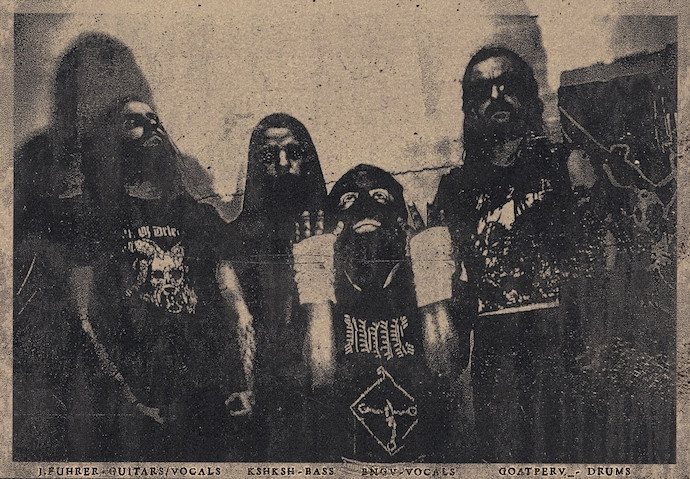 Some of you might remember this band’s 2016 record Rot Prophet (released by Vault of Dried Bones, and on tape by Norway’s Gravplass Propaganda). I touched upon it briefly, dropping references to Mitochondrion, Auroch, and Adversarial and mentioning that “I thought my head would come apart, given the speed and violence of the attack”.

In the intervening years Eggs of Gomorrh haven’t lost their lust for speed (or blood). They are still unabashed sonic terrorists, but as this new song proves, they’re capable of channeling chaos in ways that mystify as well as mutilate. “Prayeggrh” is astonishingly ferocious, but also quite intricate, and performed with unusually impressive technical skill.

A brief but brutal drum fanfare announces a turbocharged onslaught of percussive tumult (the drumming is capable of flipping your head upside down all by itself), together with scything riffs that also flare and moan, and which sync with the rhythm section (in the blink of an eye) to deliver high-voltage jolts, giving the music a rapid-fire, start-stop quality that gets the pulse jumping. Meanwhile, maniacally flickering leads channel blood-hungering ecstasy, and the vocalist’s cauterizing howls and ghastly roars make an already slaughtering experience even more psychotic.

There’s a wisp of astral eeriness at the end, but not long enough to let you calm down. By then, there will be too much adrenaline in your system for that to happen.

As for insights from the band, what we have is this: “”Prayeggrh” is an incantation type setting with a demon tearing up a fallen archangel to pieces on a ritual altar during a scene of lustful snuff sodomy”. 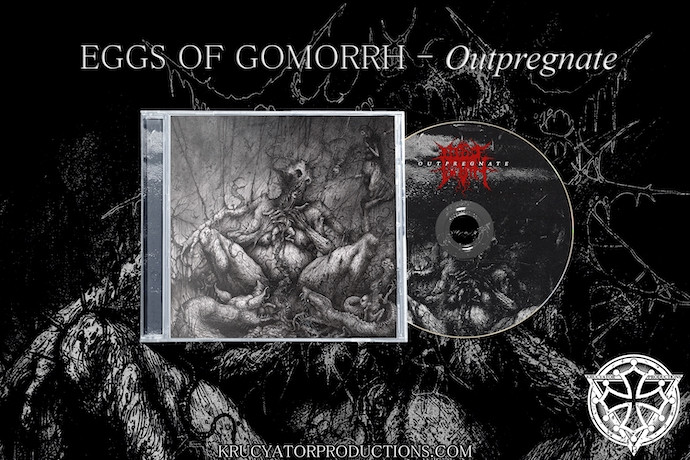 This whole EP is an explosive experience, and the physical packaging will make it stand out in an even more horribly luxuriant fashion, thanks again to the grotesque aesthetics of Nekronikon’s visual creations. Housed in a jewel-case CD with an 8-page booklet, Outpregnate is ready to order now.