The four long tracks that made up the 2014 debut album of New York-based Funereal Presence left this writer full of wonder, and mentally and emotionally discombobulated. The Archer Takes Aim was both a savage visitation to the black metal of the genre’s halycon days and an almost experimental reimagining, never remaining in one space for very long, yet displaying such exuberant creativity that it became a beacon which pulled me back over and again.

It is thus a genuine thrill to share the news that Funereal Presence is returning with a new album that will be released by The Ajna Offensive in North America and by Sepulchral Voice in Europe. Entitled Achatius, it again consists of four long-form compositions, and if anything, the music is even more fantastical, more bewilderingly idiosyncratic and ingenious, and even more likely to leave listeners in a state of shock and awe.

The first astonishing revelation from the album is the song we’re presenting today, “Wherein Seven Celestial Beasts Are Revealed to Him“. 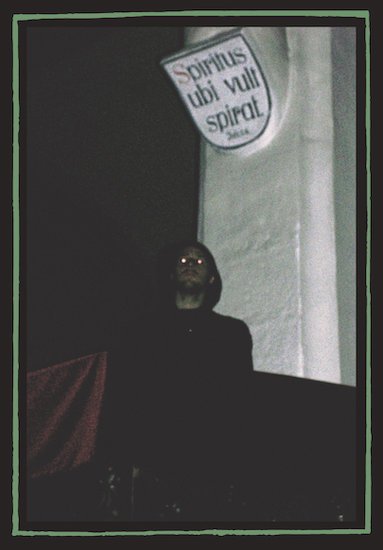 The song was molded with the rough and abrasive production quality of decades past, and displays more than a little of the throat-slitting hostility and dismissive arrogance of the black metal from three decades past. Yet it also pushes the boundaries of convention — and the limits of its listeners’ sanity. The project’s sole creator, Bestial Devotion, once remarked, “I do the music that no one does for me anymore,” and it could hardly be more clear that mass appeal is the least of his goals, in fact no goal at all. The challenges this new music will pose to many listeners will be too much for them to overcome; for others it will be a revelation.

“Wherein Seven Celestial Beasts Are Revealed to Him” is a macabre symphony of madness and mystification. The opening allure of a classical guitar instrumental (which is a misleading prelude if there ever was one) leads into the crashing bombast of roaring drums, a dense haze of slashing riffs, and spearing, weirdly flickering guitar leads. The drum rhythms (which prove to be in constant flux) batter and bound beneath braying chords that channel soaring fanfares of ecstatic lunacy.

With a fundamental core of discordance and the spirit of mayhem given free reign, the music cavorts among fiery whirlwinds of cacophonous euphoria and flurries of mind-twisting fretwork, and among bounding, syncopated tempos and off-kilter drum rhythms that seem to lurch and flail. The song also jars and electrifies the senses with bursts of dervish-like thrashing and swirls of gleaming melody.

After almost 7 minutes of this rampant extravagance, moody rippling notes segmented by great crashing tones provide the briefest of interludes before the gates to the asylum are thrown wide again, and the macabre tumult resumes, perhaps even more brain-frying than before, with searing leads leaping from the sonic delirium and then transforming into the sound of seductive incantations, practicing a form of magic designed to lure us into self-destruction.

More great crashing storms lie ahead, along with maelstroms of wild, berserker fretwork over tempestuous drum blasting, and a finale of grand and glorious aural incandescence.

It’s enough to leave even the most adventurous and blood-lusting devotees of black metal darkness aghast. Some will flee the song and run for the hills long before they reach the end. Others will be famished for more of this; needless to say, I’m one of those.

The Ajna Offensive and Sepulchral Voice will release Achatius on CD and vinyl LP formats. For more info about the release as it becomes available, keep an eye on these presences:

4 Responses to “AN NCS PREMIERE: FUNEREAL PRESENCE — “WHEREIN SEVEN CELESTIAL BEASTS ARE REVEALED TO HIM””