The four long tracks that made up the 2014 debut album of New York-based Funereal Presence left this writer full of wonder, and mentally and emotionally discombobulated. The Archer Takes Aim was both a savage visitation to the black metal of the genre’s halycon days and an almost experimental reimagining, never remaining in one space for very long, yet displaying such exuberant creativity that it became a beacon which pulled me back over and again.

It is thus a genuine thrill to share the news that Funereal Presence is returning with a new album that will be released by The Ajna Offensive in North America and by Sepulchral Voice in Europe. Entitled Achatius, it again consists of four long-form compositions, and if anything, the music is even more fantastical, more bewilderingly idiosyncratic and ingenious, and even more likely to leave listeners in a state of shock and awe.

The first astonishing revelation from the album is the song we’re presenting today, “Wherein Seven Celestial Beasts Are Revealed to Him“. END_OF_DOCUMENT_TOKEN_TO_BE_REPLACED 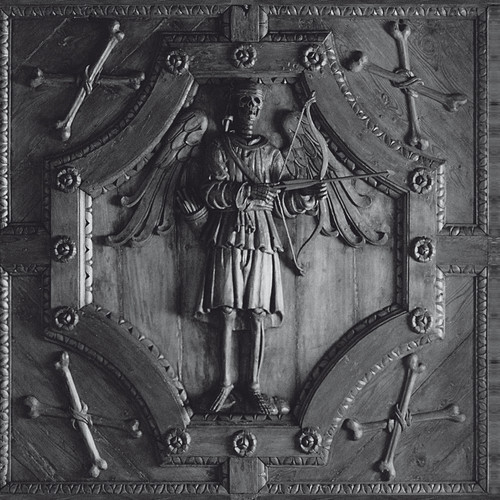 I’m mainly putting these two songs here so that, six months from now, when I include them in our list of 2014’s Most Infectious Extreme Metal Songs, I won’t have to cringe in shame and admit that I never wrote about them.

This New York band’s debut album The Archer Takes Aim was released in March by The Ajna Offensive. It’s “only” four tracks long, but those songs add up to nearly 50 minutes of music. The opening song is “The Tower Falls”. It’s 12 1/2 minutes long and still ends too soon, as far as I’m concerned.

I don’t need to tell you that some of the best metal songs in creation are long-form creations. But our Most Infectious list isn’t necessarily about the best songs. The songs have to be good, mind you, but the main criteria is that they have to be catchy, hard to forget, addictive — and those aren’t the first qualities that principally come to mind (or at least my addled mind) when you think about epic-length music.

No doubt, long jams can have more powerful and lasting effects on your mental and emotional states than short blasts of hook-filled, neck-throttling energy. But you often live in them “in the moment”. They don’t necessarily drift back into your mind and start replaying themselves without any conscious volition of your own. But “The Tower Falls” does that. END_OF_DOCUMENT_TOKEN_TO_BE_REPLACED