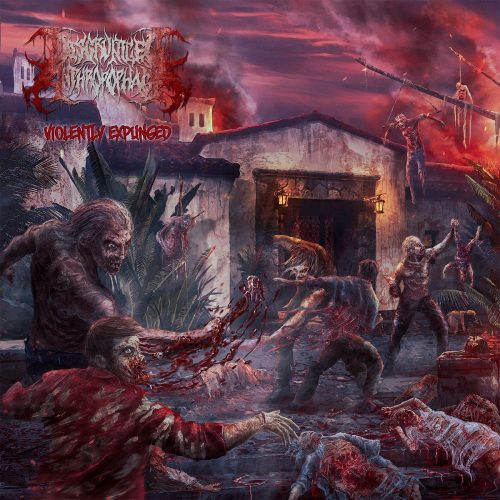 (This is Vonlughlio’s review of the new album by Disgruntled Anthropophagi from Pittsburgh PA.)

This time around I have the opportunity to recommend Disgruntled Anthropophagi‘s sophomore album, Violently Expunged, to be released via Lord of the Sick Recordings on March 15th.

I was lucky enough to discover the band in 2015 with the release of their debut album, entitled Rampage of Misanthropic Purge, which was a slab of the raw power of BDM with complex changes in the song structures.  I became a fan right from the first listen, convinced by the violent energy they put into those 11 songs with such pure non-stop force. 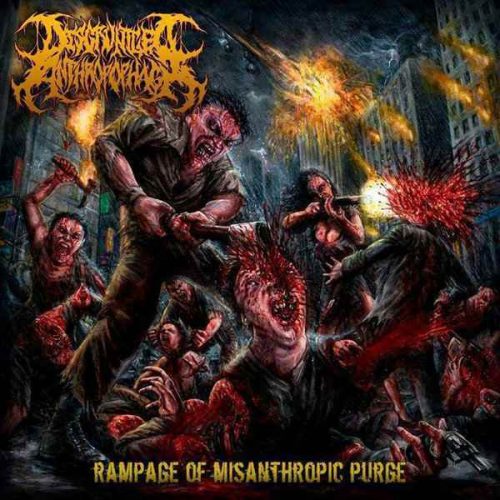 The band consists of Mr. Luciano, on drums/vox (Abolishing the Ignominious, Andromorphus Rexalia, Embludgeoned,  Injurious, Manipulated Calamity, Psycophagia, ex-Animals Killing People and ex-Immortal Flesh) and Mr. Jay on guitar (Manipulated Calamity). They sure as hell have been in the BDM scene with different projects, and together these two just work well together, as demonstrated by the overall results (in both the vision and the music). I would honestly like to see the jam sessions between them, and see how they go about their creative process.

For me, their debut is on a personal list of favorite debuts by any band, regardless of genre, and I’ve wondered for years what this project would do for their next effort. Well, after those years of waiting I’ve been lucky enough to hear the new album in its entirety — and it will cut you through you with no mercy. To be clear, I had no worries whatsoever that this the new release might fall short, because Mr. Luciando and Mr. Jay had already made clear how BDM should sound. Also, they just don’t give a shit about pandering to listeners — and for that I salute them. They’ve never compromised and have remained true to what they envisioned.

Now, having had the chance to listen to Violently Expunged multiple times, as well as re-visiting their first release, I will say that this new album is a major step up, with some changes that have worked well. The first one is that the sound is more natural and better produced. While some may prefer the rawer sound of its predecessor, let me assure you that this new natural sound does not diminish the ferocity of the songs. The other change to note is that the song lengths are shorter, as is the album as a whole, clocking in at around 29 minutes.

They do adhere to complex changes here and there in the structures of the songs, and the blast beats are as addictive as always. The vocals are just pure filth, venting hatred toward ourselves, as this album focuses of how humanity can be so hateful and merciless, becoming the cause of its own extinction. It is a musical vision of how are we going to expunge the human race from existence.

Yes, the vocals, the blasts, and those cutting riffs are able to tell us all of that with their sound in each of the 8 chapters, each of which is its own entity within the story that is being told.  For me, this album is just pure bliss, and it is addictive as hell!!!! It would be great to see them live someday, and as always with musicians of such talent I hope that the band will receive more recognition in the scene for their amazing BDM creations for us to enjoy .