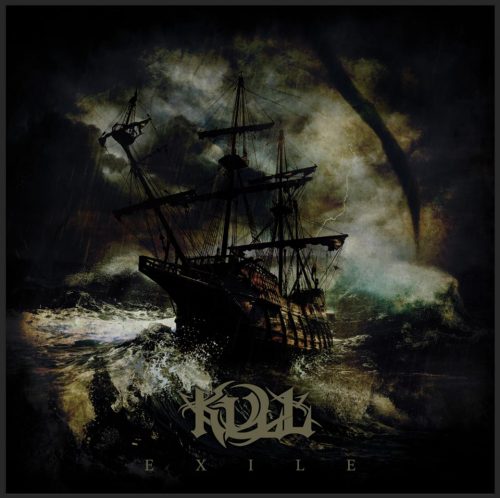 He was eventually joined by the brothers Chris and Jonny Maudling to form the core songwriting group, and Bal-Sagoth released their first demo in 1993. They followed that with six albums, three on Cacophonous Records and three on Nuclear Blast. The last of those was The Chthonic Chronicles in 2006. 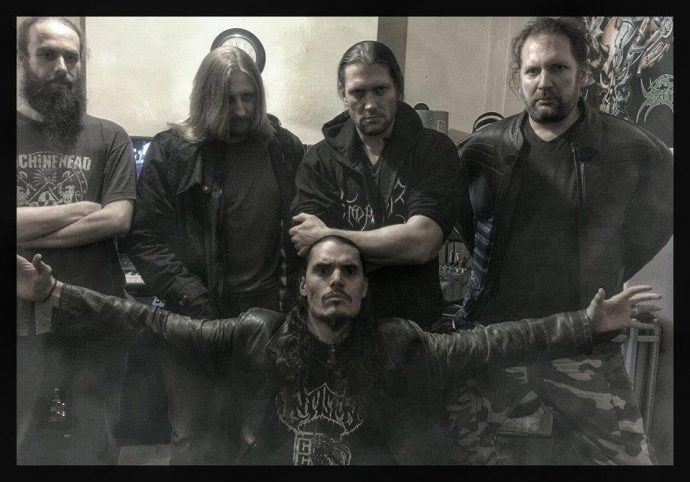 In February 2013 it was announced that the brothers Maudling (guitarist Chris and keyboardist Jonny) had formed a new band named Kull for the release of what was originally planned as Bal-Sagoth‘s seventh album. Along with them Kull’s line-up includes two of the other three members of Bal-Sagoth — bassist Alistair MacLatchy and drummer Paul Jackson. The absence of Byron Roberts seems to explain the choice of a new name, and his place was filled by vocalist/lyricist Tarkan Alp from the death metal band Dyscaphia.

Kull’s debut album is named Exile, and it will finally be released by Black Lion Records on April 30th of this year. The song below, the first excerpt from Exile, is “Of Stone and Tears“. This is a big, booming neck-bender of a song that also swarms and swirls. Eerie and ominous and jolting, it also flickers, gleams, and soars. Exciting stuff to these ears.

Pre-orders aren’t available yet, but will be launched in March.

In mid-December last year Temple of Mystery Records released a 7″ vinyl split EP that included one song by Slovakia’s Malokarpatan and one song by the Finnish black metal band Demon’s Gate. Just yesterday Malokarpatan provided a digital release of its track from the split, “Holbaard Dzírobrad“. That track includes a guest vocal appearance by Barditus from the Belgian band Lugubrum, and a guest performance on the fluegelhorn by Midgaars from the same band.

The song was recorded during the winter of 2016-17, and includes cover art by Karmazid for Malokarpatan’s side of the split. So clearly there were some delays in the release of the split, but I’m damned glad that this new song has also now become available digitally.

Malokarpatan‘s music is always fascinating, and unpredictable (they definitely march to the beat of their own drummer), and there are plenty of twists and turns in this new one. The slow, gliding and swirling guitar melody that wafts in dreamlike, shining tones above the physically powerful rhythms really sticks out; so do the moody bass notes that surface when the song turns in gloomier directions. The bass is still a very cool presence when the song ramps up to a riotous finish, which again comes vibrantly alive thanks to an electrifying guitar solo, before the music devolves into madness (the vocals are insane all the way through).

Having heard that wonderful Malokarpatan track, I became curious about the Demon’s Gate song that accompanied it on the split. I haven’t found a digital release of the song (the name of which is “Kartanon herra“) but did locate a YouTube stream, which I’ve also included below.

This song is thoroughly crazed — a dense, extravagant, lunatic maelstrom of sound that also twists and turns in different directions, all of them diabolically hallucinatory, as the rhythm section pushes and pulls the music’s momentum. As weird and warped and creepily mesmerizing as the riffs and leads are, the vocals are the wildest (and most terrifying) sounds of all. I’m suddenly left very interested in tracking down the few other short releases by Demon’s Gate that preceded this split. 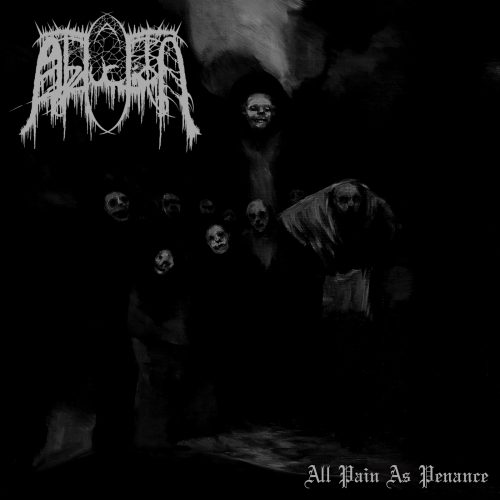 This Abduction is a one-man UK black metal band (there’s a French one with the same name), whose debut album To Further Dreams of Failure I reviewed (in part) in another SHADES OF BLACK column in March 2017. The band also released an album last year, A Crown of Curses, and now they’ve already got a third one geared up for release on March 29th via the Lithuanian label Inferna Profundus Records.

All Pain As Penance is the name of the new one, and “Infinite Ancient Hexes” is the first track made available for streaming. On this track, as on all the others, A|V handles everything except drums, which were performed by session member EG. His drumming on this new song is physically powerful, driving the pace in a plundering fury while delivering neck-cracking fills along the way. Meanwhile, the riffing creates a dismal and poisonous atmosphere, a thick, desolating miasma of sound, parsed by chiming chords that are still moody but also hypnotic, and by an incendiary solo.

It’s an absolutely explosive, irresistibly head-moving track, notwithstanding its aura of pestilence and wretchedness. It rocks as well as ravages, and it’s easy to get addicted to it very quickly. 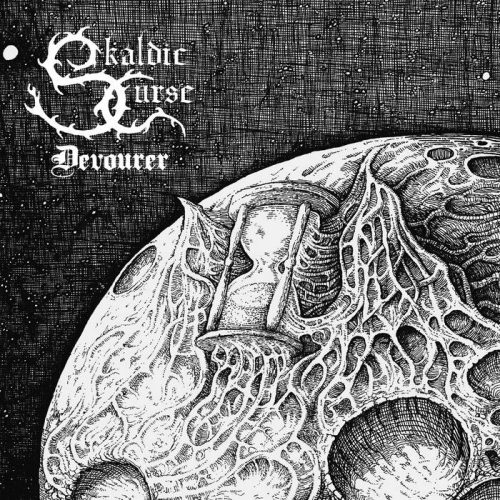 The intrigue of this next song derives from the fact that the line-up of Skaldic Curse features members of Akercocke and Fen. They joined together to form Skaldic Curse a decade ago and recorded an album named Devourer — which was never released. I don’t know why it wasn’t released, but now it finally will be — on May 3rd, via Apocalyptic Witchcraft.

I haven’t yet heard all of the record, but the one song from it that’s now out in the wild is a really good one. After a haunting and mystical intro, and a little bass bridge, “Impact Winter” kicks into high gear with blasting percussion and flickering guitar. The music mostly stays in the red zone thanks to feverish, insectile fretwork, braying melodic accents, a layering of panoramic ambient music, and maniacal drum strafing, complemented by vicious, snarling vocals. But it also includes an unexpected jazzy, proggy instrumental interlude that’s just as much fun as all of the extravagant, unhinged exuberance that surrounds it.

If this doesn’t leave you pop-eyed and slack-jawed I’ll be surprised. 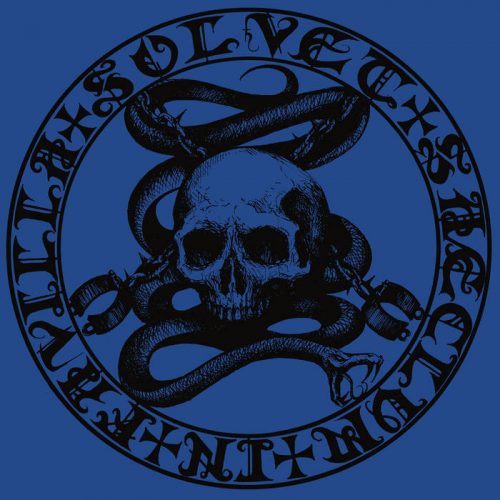 Now we come to that complete album stream I mentioned at the outset. It’s the second full-length by the French duo Drastus, which is set for a March 1 release by Norma Evangelium Diaboli (the distinctive label in which one of the members of Deathspell Omega is involved). I’m unfamiliar with the band’s debut album, Roars from the Old Serpent’s Paradise, perhaps because it was released 14 years ago (!). Yes, quite a long time has passed in between full-lengths, but there were a pair of Drastus EPs released during that time (though even the last of those was a decade ago).

Though I’m ignorant about the previous music of Drastus, this new album — La Croix de Sang — is phenomenally good. The music is profoundly sinister and threatening, and persistently frightening in its atmosphere, yet frightfully glorious, too.

The album is a riveting experience for other reasons, apart from the sensation of being swallowed whole within a nightmare dimension. The songs are unusually intricate and performed with exceptional instrumental skill (the drumming alone is worth the price of admission). Almost labyrinthine in their progressions, the tracks are bewildering yet absolutely gripping as they whip your head around and around, drawing you ever-deeper into this blood-freezing, mind-mangling realm.

The violence is explosive; the usually dissonant melodies are sorcerous; the bombastic surges of power raises visions of immense draconic majesty; the episodes of gloom have the choking aroma of plague; the barbarous and wailing vocals sound like the horrifying communion of the tortured and their torturers in Hell. Even the utterly haunting interlude track “Hermetic Silence” does its job  well — and the pairing of it with the enormous headbanger of “Occisor” that immediately follows it makes for a great contrast.

Putting that little interlude to one side, there are no weak links in the running order. Without much advance fanfare, this album has quickly vaulted high up among the best black metal albums I’ve heard this year. I’ll be surprised if it isn’t still in the upper echelons when this year ends.

NoEvDia recommends Drastus for fans of Thorns, Dead Congregation, Mayhem, and Deathspell Omega. The physical editions (CD and LP) will be released on March 1st; the digital edition can be streamed now.