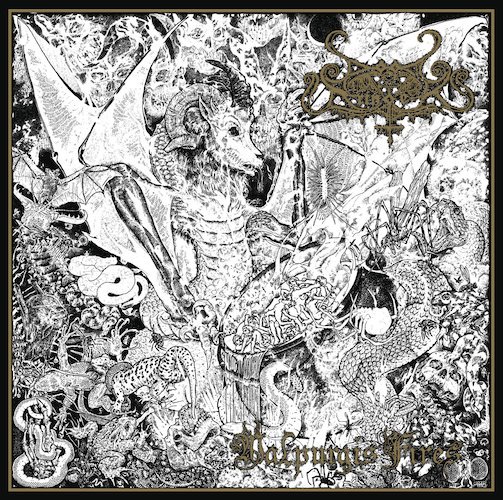 Everything about Doombringer’s new album Walpurgis Fires is sorcerous. One imagines hooded warlocks reciting conjurations over a smoking cauldron, transmuting a host of musical ingredients into a strange new potion that’s both intoxicating and poisonous. A metal musicologist would have a fine old time attempting to reverse-engineer what they’ve done and trying to document the formula, and we’ll do a bit of that here because their concoction is so unusually inventive.

But such a dissection would only go so far in explaining why the album is such a heady (and unnerving) experience; there is no good substitute for simply listening to it — which we’re giving you the opportunity to do today in advance of the album’s release tomorrow (March 7th) by Nuclear War Now! Productions. 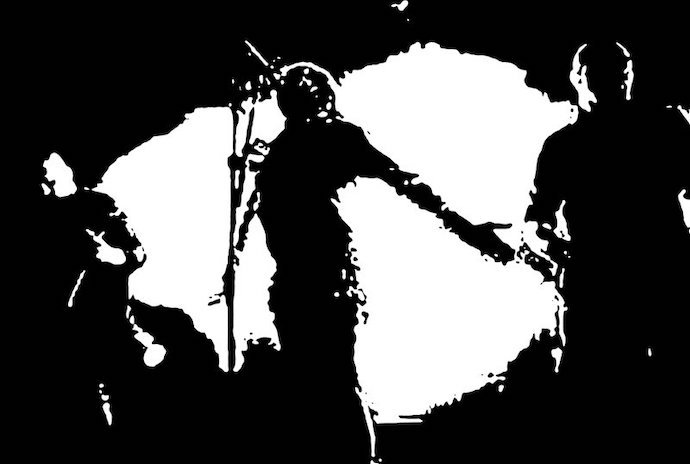 At a very high level, this Polish band brew their smoking potion with elements of death metal, black metal, occult doom, and hallucinatory psychedelia. The musical influences span multiple decades of metal and rock, interwoven into intricate, constantly morphing compositions that are rich in contrasting sounds. They know how to bring forth heavy, headbangable riffs, but they seem even more devoted to creating moods and atmosphere. Indeed, what ties all these disparate strands of music together is an overarching atmosphere — a unifying paranormal sensation throughout the album, a feeling that we have become involved in occult rites, surrounded by witches, demons, and ghosts.

Those contrasting sounds include dense, corrosive, tremolo’d riffing deployed in a way that creates a harsh, miasma-like backdrop, but also transitions to rough chugging chords and dismal crawling tones. And on the other hand, the music includes high, clear guitar leads that shine with preternatural light. The varying guitar tonalities are extravagant — some of the leads almost sound like a mellotron, while you might find strange harmonies created through the introduction of foul distortion.

The vocals and the drumming are no less extravagant. The voices range from caustic shrieks to fiery yells, from grotesque gagging growls to creepy chants and bestial roars. And the drumming is a kaleidoscope of changing patterns and tempos, the percussion cracking and clattering, blasting and galloping, bounding in glee and marching with militaristic discipline. There’s a big booming and growling bass in the mix, too, providing heaviness and anchor points for chords that race and slash, jolt and moan, and for a broad array of leads that boil and wail or twist in slow, serpentine configurations.

But, as noted, this is one of those albums that creates powerful atmospheric impressions and moods, in addition to providing judicious doses of head-moving groove. The songs become ever-changing manifestations of rapture and rapaciousness, blood-freezing dread and stalking horror, mystifying black magic and twisted hallucination, and moments that are magisterial and macabre. But it’s all devilish, and persistently bewitching.

The opener “Into the Woodlands” has a feeling of vicious exultation, like the sound of possessed souls cavorting about a giant bonfire, twisting and writhing and catching fire themselves. But you’ll get a chance to bang your head before it ends, and Doombringer throw in other chances to do that in other songs (see “Sworn To Malice”, for example). On the other hand, the follow-on track “Agenda del Aquelarre” creates a mood of sinister peril and spectral terror. Fast at first, it slows into a ghoulish lurch and quickly becomes ominous and oppressive, thanks to a morbid crawling riff paired with a weird wailing lead.

Those two songs establish a pattern that is repeated throughout the album. All the songs are dynamically paced, but the album does tend to follow the more ravaging and dervish-like tracks with songs that tend to be more doom-laden and horror-stricken. “Samhain Melancholia”, for example, is a macabre manifestation of cold, cruel tyranny and ghastly misery, and while “Stupor Infernal” is a display of mad exultation, “Unnatural Acts of Flying” is slow and pestilential, with melodies that groan, and cry out in desolation.

“Walpurgis” makes for a fine closer, creating an occult atmosphere of reverence and unchained rapture, combining a head-moving march, tumultuous blasting, and slow stomping, along with queasy leads and a high, swirling solo that sounds flute-like.

It’s almost a shame that this album wasn’t released on Walpurgis Night or Samhain, those times when the fabric between our world and another is torn open and witches and warlocks convene to conduct their sabbaths in forests alive with bonfires. On the other hand, Walpurgis Fires is capable of putting you in the midst of such scenes any day of the year, and for that we should be grateful.

6 Responses to “AN NCS ALBUM PREMIERE (AND A REVIEW): DOOMBRINGER — “WALPURGIS FIRES””