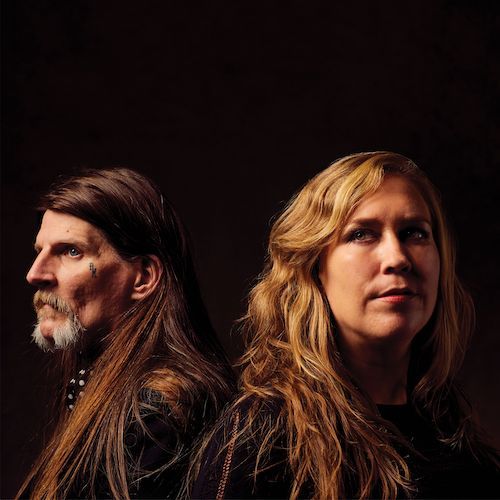 Last night, as I made my way through a batch of new songs that I noticed yesterday (almost all of which actually surfaced just yesterday), a pattern began forming in my mind, a bit disjointed at first, but then everything fell together as I began rearranging the pieces (one of the pieces that fell into place came my way via NCS contributor Grant Skelton, who also furnished some words to accompany it). The result is what you now have before you.

In an effort to present this musical pattern in a way that has the pieces falling into place for you as you go along, and because I’m short on time, I changed the usual format of this round-up. You’ll see what I mean (but if you like the usual format, don’t worry, the change isn’t permanent).

The title of EARTH’s new song, “Cats on the Briar“, made me think of something jittery and nerve-wracking (let the image form in your mind). Instead, the music is simply sublime. It’s so fluid and so gorgeous that it made me feel warm, like floating gently out toward a rising sun on a placid salt sea. That’s not usually a sensation I’m after when listening to metal, but the song is so spellbinding that I was — and still am — helpless to resist.

(The album, Full Upon Her Burning Lips, will be available on May 24th via Sargent House.)

Near the end of “Cats on the Briar“, the music begins to transmit a feeling of melancholy. Grief somehow surfaces, but not in a way that jars the reverie. There’s also a feeling of mesmerizing moodiness at the beginning of HELEVORN’s new song “Aurora“; those slow stringed notes (which sound almost like a banjo but are more likely an Eastern instrument) almost have a feeling of an Appalachian back-woods  lament. When the drums come in and a wailing Arabic melody rises up, the music becomes even more mesmerizing — though much, much heavier, thanks in part to a mountainous bass presence.

The lyric video is beautiful to look at, and the words are engrossing. Expressed through both harsh growls and somber clean vocals, they seem to be coming from the mind of someone who died before the thoughts were formed. It’s that cleanly sung chorus that really sticks the song in the head, though the mystery and exoticism of the music are also big parts of its allure.

P.S. I’ve discovered that the song is about Aurora Picornell, a woman who was murdered at the age of twenty five, and after more than eighty years, her body has still not been found.

(The song is taken from the album Aamamata, which was released on January 23rd.)

By now I guess you can tell that the pattern is beginning to take the shape of doom, the music flowing in a decidedly heavier and doomier direction. The trend continues (dramatically) in this next song, introduced by following words from Grant Skelton:

“The album art for QUALLUS‘ self-titled debut evoked in me a memory of the Ingmar Bergman film Hour Of The Wolf. It was the climactic dinner table scene, wherein the protagonist, Johan Borg, observes one of his rich hosts pull off her own face, along with both of her eyes.

“While this isn’t necessarily the time or place to analyze that film, Quallus’ music would complement it very well. The album’s two tracks (aptly titled “Old Fear” and “Black Despair”) are undulating and unsettling. Expect a very pronounced low-end that swirls about you like a thick blanket of gray fog. Melancholy lead guitars tread alongside smoky, suffocating vocals. And I mean that literally – vocalist Otti sounds like he’s drowning. Drowning beneath the weight of the music, as well as the deluge of his own bereavement. In spite of that, there’s something very soothing and relaxing about Quallus. Oddly enough, I find it helps me unwind myself.

“It’s only March, but I firmly believe this album will show up in my favorites of 2019.”

(This self-titled album was released on March 1st and is available on Bandcamp.)

The vibrant drum rhythm at the end of Quallus‘ “Black Despair” seemed to flow into the opening sequence of INTER ARMA‘s new song “The Atavist’s Meridian” — though the Inter Arma drum sequence is even more hard-hitting and electrifying. The gut-churning heaviness of the riffing is a bit of a kindred sound as well, but the momentum of the song surges forward in a way that differentiates it from what Quallus were doing.

Tension builds in the music; shattering pain bleeds through the vocals; the pulse of the melodic accents transmits a feeling on the borderline between agony and striving… and all the while, that hellaciously head-hooking drum rhythm continues to drive.

But that’s only the first five minutes. The song becomes dreamlike, or more precisely, hallucinatory — but the tension doesn’t disappear. It just becomes a tension mixed with gloom and fear. The band eventually start ratcheting the tension again, and heave the earth beneath your feet at the same time, but that sensation of fear persists, and becomes magnified, until the drummer goes nuts. (Very cool video too.)

(The song is from Sulphur English, which is due out on April 12 via Relapse.)

As I think of it, the final song in this collection doesn’t fit the pattern quite as naturally as the sequencing of the others, since it’s stylistically more divergent from the doomier vibes that tend to thread the last few songs together. But the Inter Arma track pushed the energy to new heights, and this next performance by THE MODERN AGE SLAVERY kind of takes the baton and then delivers a finishing kick.

No surprise, of course, because the track is a cover of Slayer’s “Disciple“. But the band put their own bruising and battering spin on it. They’ll slug you in the neck and spit vitriol in your face while they’re thrashing. It’s a ferocious assault, and they also manage to send the song soaring too — right before a closing breakdown.