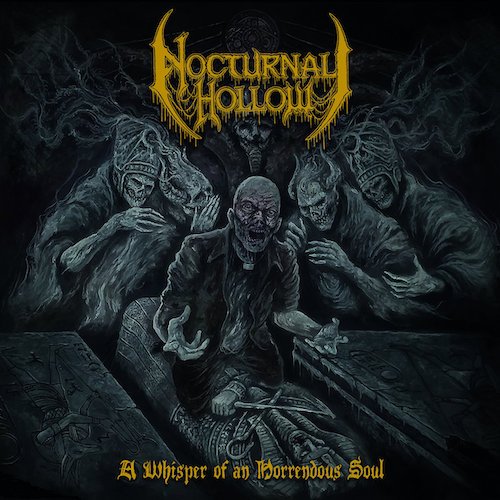 Prepare to feel the fear of being nailed into a coffin and the adrenaline rush of trying to claw your way out before your pumping lungs exhaust all the oxygen.

“Trapped In A Coffin” is the name of the song we’re about to present, and as the name suggests, it summons those desperate sensations — through music that rampages and romps in a vicious, head-hammering fury. It comes from A Whisper of an Horrendous Soul, the new fifth album by the Venezuelan death metal band Nocturnal Hollow, which will be released on March 29th by Redefining Darkness Records in the U.S. and by Raw Skull Recordz in Europe. 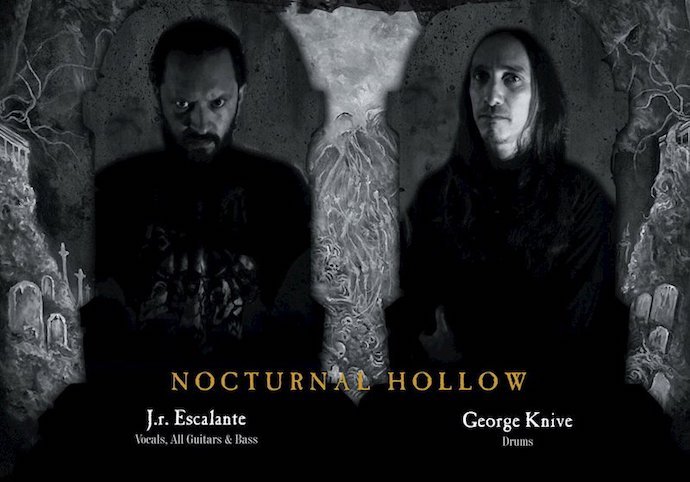 When you hear this new album, you might mistake band’s geographic origins, since there is a decided affinity in it for the strains of old school Swedish death metal. But for Nocturnal Hollow, this isn’t the result of some recent epiphany or an effort to jump upon the latest bandwagon to roll through town. They’ve dedicated themselves to honing their skills at this particular craft for more than eight years, and you’ll find that they’ve become damned good at it. Their accomplishments become all the more impressive in light of the fact that Nocturnal Hollow is just a two-man demolition machine — JR Escalante (vocalist, guitarist, bassist) and George Knive (drums).

This song is a good example of the duo’s ability to rip and maul, and to create dynamic music that’s bleak and horrifying as well as berserk. As JR Escalante explains about the track:

“‘Trapped in a Coffin‘ is a song that attempts to imagine the horror of being buried alive. From the moment they put you in the casket, listening to the sound of the hammer hitting the nails, and dropping you into your burial place while you are alive.”

The song kicks into a thrill-ride right from the start with hammering drums and fast, swirling and swarming tremolo’d riffing, backed by a rapid bass rumble. As the song surges ahead, JR vents the lyrics in a harsh grated howl, and the music segues into a big head-moving drum rhythm and crashing, slashing chords. But although the song is compact in length, the band pack changes into the experience, as the riff becomes a dismal and devouring drilling sound over a cantering beat — and a growling guitar (and a nasty roar) provide a bridge into an even more brutish and blood-congealing attack, accented by a slithery, slimy solo that ignites into a fireball fret-melter.

You’ll get a further sign of how good Nocturnal Hollow are at their chosen form of death metal by also listening to the first “single” from the album, “Coming Back to the Grave”, and so we’ve included that stream along with our own premiere. Pre-order via the link below!

2 Responses to “AN NCS PREMIERE: NOCTURNAL HOLLOW — “TRAPPED IN A COFFIN””