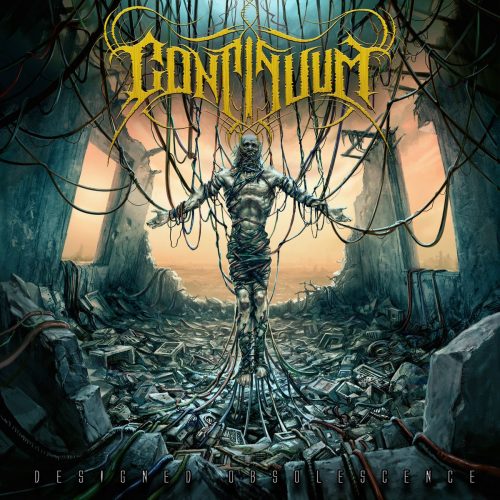 (DGR reviews the new album by California-based Continuum, which was released in February by Unique Leader Records.)

I’ve often mused that if I were to pick a handful of bands who represent the Unique Leader label, as a sort of throughline of all the sounds that they currently have signed to their roster, Arkaik would be one. Their combination of tech-death, core, and straightforward death metal does a pretty good job representing a whole lot of what the roster sounds like.

To continue with that thought exercise, Continuum would likely be one of the others. The line-up alone includes resumes of time spent in about a third of the groups on the Unique Leader roster. Guitarists Chase Fraser and Ivan Mungia add Decrepit Birth, Deeds Of Flesh, and Arkaik to that list just between the two of them, not to discount Chase’s work with Conflux either.

Continuum feel like another branch curving off the tech-death road. They’re about as no-frills of a tech-death band as you can find out there, comprising an “all-star” roster of musicians whose most recent form, as manifested in Designed Obsolescence, seems not only to have fully embraced the sort of head-spinning tempo at which they write, but also to have gained a love of the deep-throated gurgling-growl of slam and brutal death metal.

Designed Obsolescence is relentless in its quest for brutality. It starts off neck-snappingly fast and then remains at that speed for nearly the entirety of its run time, neatly tying off at nine songs and thirty-two minutes later. It is so heavily groove- and riff-focused that at times it seems like the album is taking an angular death metal approach, bouncing from one segment to another, with odd angles jutting all over the place, and drummer Ron Casey propelling the whole affair forward on a platform of drumkit annihilation.

Other than a few small orchestral hits spread throughout, it is basically full-speed ahead from moment one. Vocalist Riley McShane throws himself into the fray for the second time with Continuum, this time determined to differentiate his work here from everything else he’s present in. And thus Designed Obsolescence has him dealing heavily in guttural lows and growls — bellows befitting the aforementioned brutal death descriptor, and sometimes showing in long gurgled stretches what might have landed him with his brief stint in Pathology in 2018.

However, it’s also that dogged determination for death metal domination that becomes the album’s  Achille’s heel, as many sections of Designed Obsolescence unfortunately fall into the realms of the indistinct, with many songs blurring into one another. It’s not hard to imagine a few unifying tracks for fans to really latch on to, but other favorites could be all over the map. The moments when you’re paying attention will likely seem awesome, but if your attention drifts elsewhere you can easily get lost, as to which bevy of blastbeats is currently beating a dent into your skull.

Opener “Theorem” lays much of the groundwork for the disc, starting off apocalyptically enough and then going for that aforementioned neck-snapping heavy groove, bouncing to-and-fro before the pyrotechnic guitar works fully take over. “Release From Flesh And Blood” performs a similar maneuver, and its instrumental maelstrom combines with Designed Obsolescence’s opener for a pretty solid eight minutes of fury.

The album’s title song proves to be one of the highlights of the disc. It’s absolutely ferocious from the start and feels like it has a genuine “purpose” to its ferocity, and so the three minutes you spend with it ascend beyond just sheer speed and impressive fretwork and into full headbanging madness for a bit. It perks things up for a few songs afterwards too, because that spark is enough to ignite the next few songs before things fall back into Designed Obsolescence’s comfortable groove.

“Remnants Of Ascension” proved to be a personal favorite, and not just because it’s the two-minute light-speed hellbringer of the album. Okay, that may partially be why, but on an album full of tech-death maelstroms and brutal-death hammerings, “Remnants Of Ascension” packs the most of it within two minutes, so that is an explosion from the moment it starts. It’s, apocalyptic, on an album that’s usually content to go for a more bludgeoning approach.

Designed Obsolescence is a doubled edged sword in that it sounds a whole lot like the tech-death scene as that scene exists in 2019, especially if you narrow it down to the specific California branch where a lot of the group’s lineup is based. It’s both good and bad on that front. You can safely assume what you’ll be in for, and the Continuum crew manage to pull off that and make it seem easy. They are experts in that field.

Unfortunately, it also means that at times the songwriting becomes a little interchangeable. While the band never drop into the full-throated car-engine effect many groups go for, the constant shifting from one segment to another within each song can feel a bit like Continuum are throwing a little under four years’ worth of rhythm and lead writing into them without a unifying thread to tie it all up, other than “fast”.

It’s frustrating because each song can stand on its own, but when running them together, the “collection of singles” effect doesn’t quite work. In a full thirty-two-minute run, Designed Obsolescence starts to blur — which is something you don’t want when you can easily list five of the nine songs (as I’ve done here) as legit headbang-heavy tracks worth listening to.

While Designed Obsolescence sticks out more than the group’s debut predecessor, it still works out to be a whole lot of red-meat for the tech-death crowd, and a little tougher to recommend elsewhere. It’s got such a strong sense of songwriting that unfortunately doesn’t gel together as often as it should, but when it does work, it’s enough to at least make you wonder what the Continuum crew could do if given the chance to go for round three.