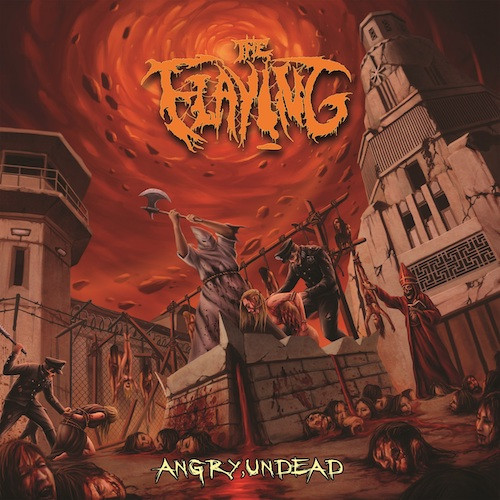 True to the band’s name, the music of The Flaying will slash the skin from your face in paroxysms of blood-spraying savagery. But it does more than that. It will also suck the air from your lungs, boil the brain, and hammer your bones into fragments fine enough to blow away in the wind.

The second album by these death-dealers from Quebec City, the name of which is Angry, Undead, will be released by PRC Music on March 22nd. It comes recommended for fans of The Black Dahlia Murder, Deicide, Archspire, Suffocation, and Cryptopsy — all of which are indeed good reference points for what you’re about to hear in our album premiere — and it was Cryptopsy’s own Chris Donaldson who produced, mixed, and mastered this rampant barrage of brutalizing barbarity at The Grid in Montreal. 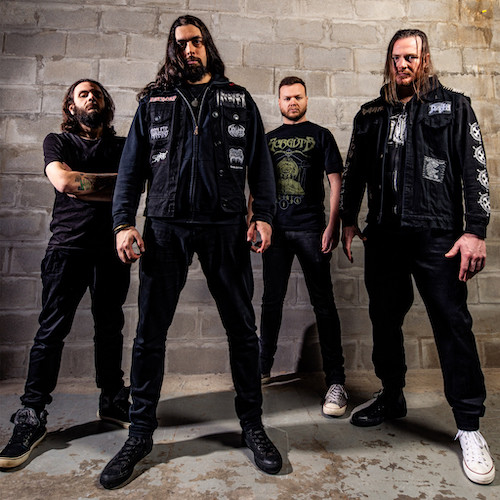 Musically, Angry, Undead is pure high-velocity mayhem. After the brief but skin-crawling overture (which indeed sounds like a recording of someone whose skin is being removed while he’s still alive), there’s no time to catch a breath.And it’s not the nearly unrelenting speed of the songs that alone accounts for the gasping effect of the music. The technical wizardry on display is equally accountable, as is the sheer merciless brutality of the music’s percussive power.

The songs aren’t carbon copies of each other, but they all do incorporate ingredients that are fundamental to The Flaying‘s strategy:

The Flaying use these ingredients to pack a hell of a lot of head-spinning machinations into these compact, high-momentum tracks. And while mayhem is definitely the main name of the game, translated through a combination of frenzied derangement and brutish thuggery, The Flaying do tip their hats to melody, interweaving wisps of dismal and defiant mood into these rampages, and the closing title track is more atmospherically creepy than anything else, with a queasy eeriness in that song’s melodic accents.

The band have said that their name is “a metaphor to life’s scorching effect on human beings in their state of hopelessness”, “a great means of torture, a brutal treatment, a total disrespect of human integrity.” The music is itself a damned good means of audio torture, one that will leave most adherents of fast-paced, technically impressive death metal ferocity smiling (through broken teeth). Reserve your copy through PRC Music via the link below.