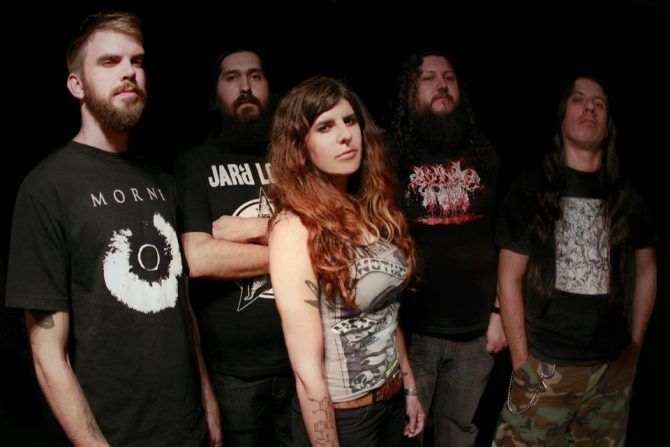 (In this March 2019 edition of THE SYNN REPORT Andy looks back at the four albums released so far by Arizona’s Landmine Marathon.)

So the original plan for this month’s edition of The Synn Report was to feature the work of one-man Black Metal malcontent Abduction so as to line up nicely with the release of his brand new album.

Unfortunately, what Islander didn’t tell me was that he’d already arranged for a premiere (and review) to go live yesterday… which just goes to show that it’s important to communicate, kids! (Editor’s intrusion: Andy listed “mind-reader” on his resume. Mere puffery, apparently.)

Thankfully, I have a huge list of alternative Synn Report candidates to select from, which made the whole process a lot easier than you might imagine, especially since I’ve been itching to write about Arizona Death Metal quintet Landmine Marathon for ages! 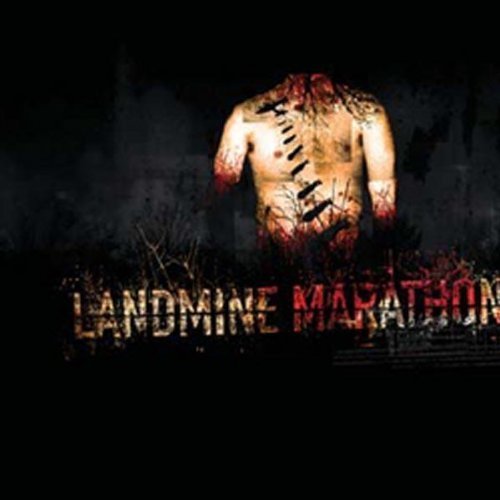 Armed to the teeth with an array of buzzsaw riffs, bone-rattling blastbeats, and blast-furnace vocals, the band’s debut goes straight for the throat with the rampaging old-school extremity of “25th Hour”, which finds vocalist Grace Perry howling like a woman possessed over an avalanche of gnarled, nasty axe-work and daisy-cutter drums, while guitarists Mike Waldron and Eric Saylor sneak in just the right amount of venomous melody to sweeten the deal.

The opening and closing sections of “Crisscross Thoughts” find the band focussing on gruesomely heavy grooves to bookend the visceral Death-Grind assault of the song’s pulverising core, while “Dying Days” juxtaposes its similarly grindy first half with a much darker and doomier conclusion, demonstrating that as vicious and as visceral as Landmine Marathon can be, there’s always an underlying method to their metallic madness.

“Thunder Blasted Bodies” starts out as something as caustic and chaotic as its name implies, before transforming into something more melodic, groovier, and, dare I say it, punkier, after several minutes of straight-up savagery, while “Muscle Crown” is one utterly unrelenting onslaught of Death, Thrash, and Grind (with just a dash of malevolent melody) that sounds like a younger, hungrier Exhumed.

The second half of the album finds the band erring even more towards the Grindcore side of things, with the ferocious forty-four-second scorcher of “White Widows” and the distressingly ominous “Fubar” pulling absolutely no punches, after which the doom-laden instrumental strains of “Untitled” provide a penultimate primer for the gritty, grime-encrusted Death Metal massacre of “Time Movement”, which brings things to a close in ugly, uncompromising style. 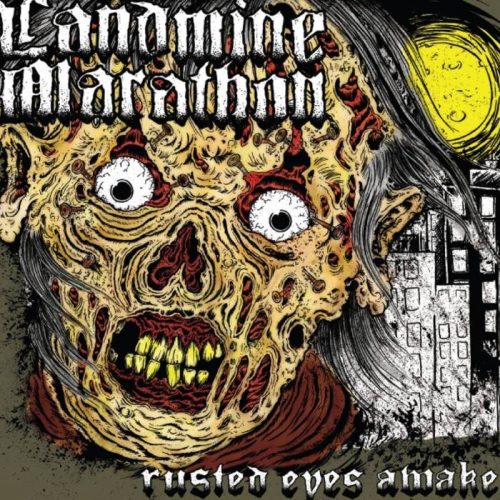 Album number two benefits from a much thicker, meatier guitar tone, as well as an increase in both abrasive aggression and wicked melody, as the churning, chug-heavy riffs and rampaging rhythms of the Bolt Thrower-esque “Bile Towers” and the raw, grind-fuelled savagery of “Certain Death” quickly demonstrate.

The hellish hooks and hammering heaviness of “Bled to Oblivion” continue to prove that Landmine Marathon have already mastered the art of controlled chaos, and the howling vocals of Grace Perry (backed up by some similarly brutish barks from bassist Matt Martinez) have never sounded as powerful and predatory as they do here, after which the gargantuan grooves of “Xenocide” and “Heroin Swine” (the former of which goes almost full-on Doom at times, while the latter switches back and forth between brooding chuggery and furious blastery) help remind you that the quintet aren’t afraid to vary their attack when the mood calls for it.

“Skin From Skull” weaves a surprising amount of melody into four-and-a-half minutes of bombastically brutal, horrendously headbangable Death Metal menace, while the ear-scraping assault of “Red Days” ups the harshness and the heaviness another couple of notches, all leading into the utterly monstrous title-track, which brings the record to a truly explosive, grit-and-gore-soaked, climax. 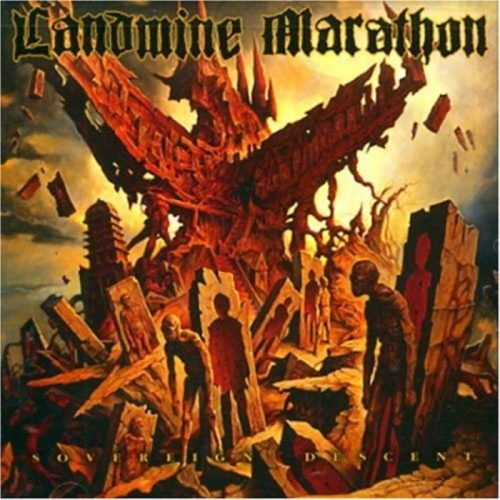 With their third album the band managed to refine their sound even further without losing an ounce of venom or violence in the process, making Sovereign Descent an even leaner, meaner, and more murderous record than its predecessors.

Surprisingly slow-burning opener “Exist” adds a touch of Carcass-esque melody to the proceedings before erupting in a whirling dervish of molten metallic fury and brutish, bone-crushing grooves, after which the pummeling “Shadows Fed to Tyrants” batters away at your eardrums like Morbid Angel covering Napalm Death… or vice-versa.

“Foul Revolt” takes the suffocating grooves of Floridian Death Metal and adds a dash of evil, Euro-centric melody (as well as some punchy, Hardcore energy) to the mix, while “Cruel Policy” takes this even further, sounding like an unholy hybrid of Dismember and Earth Crisis at the top of their game.

“Justify the Suffering” is all blasting belligerence and galloping grooves, laced here and there with cruel, cyanide hooks, and serves as a nice palette-cleanser (if only by means of getting your ears sandblasted down to the bone) leading into the unexpectedly expansive strains of “Steadfast Hate”, the longest and most intricately arranged song of the band’s career, which spends a large amount of its seven (and a bit) minutes dwelling in the darkest, doomiest corners of the Death Metal spectrum, before slowly transitioning to into a much more grindy and aggro approach in its second half.

By way of contrast “Chained by the Same Fate” is much shorter and much more savage overall, frequently coming across like an even blastier version of early Entombed (with all credit going to the frankly rather frenzied performance of drummer Mike Pohlmeier), before the archetypal Death Metal deluge of “Flood the Earth” and hellaciously hooky closer “Rise With The Tide” deliver the final, fatal blow. 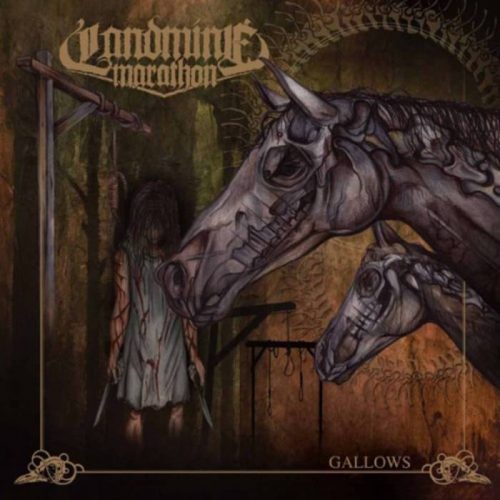 I’m definitely cheating slightly with this final entry, as I’m going to be paraphrasing from my own review from 2011 for the most part.

The comparisons to Misery Index which I made back then still stand up, to my ears at least, largely because of how relentlessly heavy, but subtly hooky, the band’s riffs are, with the blast ‘n’ burn, chug ‘n’ churn, shred ‘n’ shriek onslaught of opener “Three Snake Leaves” providing a prime (and immediate) example.

“Cutting Flesh and Bone” is a pressure-cooker explosion of rage and riffs that’s pretty much guaranteed to cause maximum carnage in the live arena (and probably poses a similar threat to some of your home furnishings too), while “Knife From my Sleeve” delves even further into the band’s Death Metal roots – drawing from the slower, more sadistic works of Morbid Angel, Autopsy, and their ilk – to deliver a song that’s equal parts lurching sludge and frenzied savagery.

“Liver and Lungs” is feral and ferocious enough to go toe-to-toe with current media-darlings (and NCS faves) Venom Prison without blinking, while the disgustingly catchy “Dead Horses” is an absolute neck-wrecker of the most obnoxiously old-school variety, and “Cloaked In Red” leans hard into the band’s D-Beat and Crust influences in order to add another layer of grit and grime to the mix.

Raw, primal Death Metal is the name of the game on “Beaten and Left Blind”, which features some of the band’s catchiest (and crushingest) riffs yet, with Perry’s scorching vocals and borderline sociopathic lyrics bathing the music in a bloody torrent of emotional extremity, before the gargantuan grooves of the aptly-named “Morbidity” bring the record to its rumbling, relentless conclusion.

One Response to “THE SYNN REPORT (PART 107): LANDMINE MARATHON”